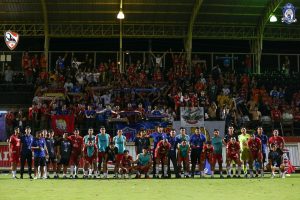 In this very strange season the only two players missing from the Chiang Mai FC line up last night were Dr. Jekyll and Mr. Hide.

Which Chiang Mai side would turn up – the lack lustre team that lost to Trat 1-3 or the vibrant, goal-scoring outfit that beat Nakhon Ratchasima 5-1 last weekend?

At the start of last night’s match these two teams were at the basement of Thai League 1. A win would be crucial for either team to have any chance of surviving for another season of top flight football.

So what you do not want to do is either to give away the softest of goals or fail to score for the first time in ten matches.

Which is of course exactly what Chiang Mai did.

The early chances all fell to Suphan Buri; Narit made a rather uncertain save away to his left from Chutipol’s scuffed twenty yard shot. Then after ten minutes with Evson on the ground in the penalty area Chiang Mai failed to clear from defense and Worawut casually hit his clearance straight into Cleiton Silva; the ball rebounding for Dellatorre to shoot wide of the far post.

Evson’s injury was enough for him to need the physio at which point under the rules he then had to leave the field before he could be allowed back on. With a corner about to be taken losing Evson, who is basically Chiang Mai’s only effective defender, was to prove critical. The corner was taken short; Narit came for, but was not close to Adul’s cross. Chotipat and Worawut jumped at the same ball and Dellatorre was left with the simplest of tap-ins at the far post.

Meechok then shot wide from 20 yards after a neat build up.

At the other end Nattawut’s header from an Apisit cross was well turned over by Patrick Deyto – the first of a series of good saves. Evson headed the resulting corner over the crossbar.

Thirty minutes gone and Silva beat Evson on the left to cross for Dellatorre whose header hit the advancing Narit with Chutipol left footing the rebound wide. He really should have done better.

Two minutes later and there were loud appeals for a Chiang Mai goal as Azadzoy’s cross was met by Chotipat who poked the ball goalwards – Deyto turning the shot onto a post where it rebounded back into the prone goalkeeper and rolled agonizingly towards the goal line. Deyto recovered to gather the ball – and with the linesman perfectly placed it is unlikely thet the whole ball crossed the line despite loud protests from the crowd.

Silva should have done better at the other end after beating Evson to a loose ball and with only Narit to beat the forward pulled his shot wide of the far post.

35 minutes gone and Chiang Mai’s persistent appeal for a handball was rejected by the officials as the defender made a sliding block on Azadzoys’ cross. It would have been a harsh call – there was no sign of a raised arm and it looked more like good defending than a poor decision.

At the other end Chutipol’s clever run and cross from the right was met by Silva at the far post – his header bouncing off the crossbar with Narit beaten.

Into injury time at the end of the first half and Evson had a free header from Wanmai’s free kick – heading down and to the keeper’s left – Deyto again doing well to push the ball around the post for another Chiang Mai corner. From the corner Suphan Buri broke quickly and a three on one break saw Supravee eyeing glory and his ugly effort was high and wide from close range.

Half time and 0-1 hardly reflected a game of real chances at either end. In reality, Suphan Buri should have had a greater cushion than their one goal lead.

Chiang Mai opened the second half with greater purpose using Azadozoy on the right side – his 52nd minute cross was volleyed over the bar by Apisit. Suphan Buri promptly brought on Tanasith as a left back to counter Azadzoy’s threat. Caique also replaced Chotipat for Chiang Mai . Azadzoy was still able to link up with Nattawut and fire a low cross in from the right which was met by Eliandro and well blocked by Artit.

Narit was then off his line quickly to lunge feet first and clear from the fast breaking Silva.

Dellatorre then shot high and wide from 22 yards running across the Chiang Mai area. Tanasith might have done better curling a right foot effort past the far post after a good advantage by the referee who could have given a Wanmai foul on Silva.

Meanwhile for Chiang Mai the game was fizzling out – Chiang Mai began to look far too predictable; the buildup was slow and too obvious. Passes were gong square or backwards to the frustration of the crowd.

It was the 80th minute before Deyto had to make a significant contribution with a spectacular save flying to his right to turn a 25 yard drive from Pichitpong around the post. From the corner Caique managed to poke the ball goalwards but this time it was a much easier save.

A minute later and Deyto was in action again – Azadzoy’s cross reached Eliandro at the far post – he took a step inside and shot right footed and low from 12 yards – Deyto making a super reaction save low to his left and although he pushed the ball out in front of goal it avoided Evson who had now been pushed into the front line.

A string of Suphan Buri injuries slowed the game down; Tanasith was booked for time wasting and Decha and Dellatorre were also booked as they squared up to eachother.

Into injury time and Pichitpong’s 25 yard free kick was a comfortable save for the Suhpan Buri keeper. At the other end Silva should have done better as Suphan Buri broke forward, his shot was well clear of the cross bar.

With that last effort the final whistle blew. Suphan Buri were good value for their win – they showed plenty of spirit and belief. The “home” side, despite last week’s fine win, seemed short on confidence which worsened as their frustration increased.

For Suphan Buri, Alvaro Silva, their tall centre back, was outstanding – taking control of Eliandro and forcing the Chiang Mai forward out wide to get the ball –positions on either flank where he is less likely to do damage to a defense than if he stayed at cente forward.

Patrick Deyto was a mid season signing and the Philippines international goalkeeper made a number of high-class saves and handled confidently throughout. What a difference a goalkeeper can make. Either Deyto or Alvaro Silva would be good choices as man, or jointly as men, of the match.

Chiang Mai FC fall back to the bottom of the League on 24 points with 5 games to go. Three of those games are against top four opposition. And the matches against mid table teams are both away from “home.”

Mathematically Chiang Mai can still survive. But a target of ten points from the last five games seems unlikely. This was a great opportunity to progress; an opportunity not taken.

A word on the crowd. For a Thursday night game 200kms from home there were a good and noisy number from Chiang Mai and also a large and very welcome turn out of Chiang Rai supporters under a Lanna Pride. promotion. Your support did Chiang Mai FC proud.