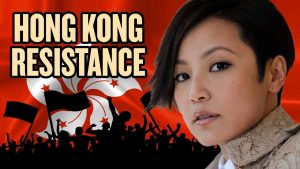 Denise Ho testified yesterday at the United States’ Congressional-Executive Commission on China (CECC) in Washington DC: this was her powerful testimony.

“Thank you, Chairman McGovern, Co-Chairman Rubio and members of this Commission for holding this hearing, and for having us here at this very critical time of Hong Kong.

We hope that our personal accounts will be helpful in your deliberations on what the United States Congress and American people can do to help the Hong Kong people in face of the erosion of our liberties and autonomy.

For more than 100 days now, the Hong Kong youth has led our city into the historical fight of our times. It is a leaderless movement, with widespread participation from people of all walks of life. It is a fight for democracy, a fight for human rights, and most of all, a fight for universal values and freedoms.

What started out as a [million-strong] march against an extradition bill, morphed into a determined fight for fundamental political reform in Hong Kong. Misjudgments and arrogance on behalf of Carrie Lam, the Chief Executive Officer of Hong Kong, resulted in a total clampdown of the Beijing government over Hong Kong affairs, at the same time surfacing the reluctance of both governments in fully implementing the One country, Two systems in Hong Kong.

With Carrie Lam hiding behind the police force for months, refusing to resolve political issues with sincerity, she has given police full authority to suppress the protests at all costs.

Since June, the Hong Kong police has shown excessive brutality in their use of force, arresting and beating up peaceful protesters heavily at uncountable occasions. More than 1400 people have been arrested up to date, with even more (including journalists, first aiders and social workers) severely injured by tear gas, rubber bullets, water cannons, and the police’s indiscriminate use of batons. On a personal note, It has been extremely difficult to be away from home and to watch the people safeguard the city from afar, especially in the past weekend where we have seen police behaviour getting out of control.

Sadly, it has become a common daily scene to see youngsters being pinned to the ground, with bleeding head concussions and some even knocked unconscious, but still refused medical care by the police.

Riot police and plainclothes officers have shown no restraint while performing their duties. From the early weeks, they have deliberately hidden their ID numbers, refused to show warrant cards even on request, therefore making it impossible for citizens to verify the legitimacy of plainclothes officers, nor to hold any police officer accountable for their violations.

Last month, a university student in possession of ten laser pointers has been arrested and detained for 48 hours. A first aider was shot in the eye by a bean bag round dispersed from above head level, risking permanent loss of sight. On August 31st, police from the Special Tactical Unit charged into Prince Edward MTR station, beating up passengers randomly. Consequently, they shut down the station for 24 hours, refusing medical care for those who were injured, raising suspicion of possible death in the station. They have recently charged into secondary schoolyards, shopping malls and on buses, where young people merely dressed in black clothing could be searched or even arrested without justified reasons.

In short, in our Hong Kong today, being young is the crime. We are now officially a police state, where people live in constant fear of political repercussions. In addition, on 21st July, in an infamous mob attack that occurred in the Yuen Long MTR station, where a white shirt clad attacked civilians indiscriminately, the police failed to arrive in a timely manner, making their appearance only 39 minutes after the incident, despite hundreds of emergency calls for help. Similar situations occurred later in the protests, where police would give favourable treatment to mobs and pro-Beijing supporters, helping them leave the sites after having attacked protesters, showing clear and continuous collusion between police and triad members.

On August 11th, police obstructed pro bono lawyers from providing legal assistance to arrested protesters in the Sun Uk Ling Holding Center, violating the legal rights of 54 persons. There were also claims from female protesters of sexual harassment inside of the police station, and of physical abuses on numerous occasions.

Since July, more than thirty “no objection applications” for rallies and marches have been systematically denied, including the 1.7 million ppl rally on 18th August, where protesters gathered and marched peacefully despite the ban. According to Hong Kong Basic Law and international standards, Hong Kong residents have the freedom of assembly and demonstration, where [a] peaceful public assembly is a legitimate use of public space. By banning the assemblies, the Hong Kong government is violating the people’s right to peacefully protest.

With police violations accumulating by the day, Hong Kong people have been demanding for an independent investigative council to be formed. The Chief Executive Carrie Lam has refused to do so, claiming we have “a well-established (IPCC), set up for exactly this purpose”. This existing watchdog, the Independent Police Complaints Commission, is in fact entirely appointed by the CE herself, has no legal power to summon witnesses nor to force the police to provide sufficient documents, therefore is powerless in bringing justice to the situation.

On its front, it all started with an extradition bill. But at the core, it has always been about fundamental conflicts between these two very different set of values: on one side, the China model, which has no respect over human rights and rule of law, and demands for their people’s submission. And the other, a hybrid city that has enjoyed these freedoms for the most of its existence, with a deep attachment to these universal values that the United States and other western societies are also endeared to.

Unfortunately, with the rise of the present iron regime of Xi Jin Ping, the One Country, Two Systems is racing towards its death.

Hong Kong represents something very unique in the world. As a crossroads that is strongly rooted in its own Asian cultures, and yet has come to be known for its values and of the rule of law, transparent institutions, and freedom of information and expression. We represent the hope that as nations develop, they will evolve towards these universal values which protect individuals everywhere.

These protections are why over 1500 multinational companies have chosen to place their regional headquarters in Hong Kong, the biggest proportion of these by country, from the United States. Hong Kong has become one of the most globally interconnected, financially important trading economies in the world, helping bring countries closer together through finance and today, the flow of data, goods, ideas, culture and people.

However, this system is now under threat like never before. Companies such as Hong Kong’s major airline Cathay Pacific, has succumbed to political pressure, firing dozens of employees due to their political stance, some only over a mere facebook post. Business people are coerced into making political decisions. MTR Corporation, our subway system, has deliberately shut down stations during rallies and marches due to pressure from a state newspaper, resulting in more than hundreds of arrests and unnecessary injuries.

As a singer and activist from Hong Kong, I have experienced the suppression first hand. Ever since the Umbrella Movement in 2014, I have been blacklisted by the communist government. My songs and my name are censored on [the] Chinese internet, and I have been called out several times by state newspapers. Pressured by the Chinese government, sponsors have pulled out, even international brands have kept their distances in fear of being associated with me. For the past five years, and even more so recently, China tried to silence me with their propaganda machines and smearing campaigns, making claims that are completely false. Right now, I am facing threats from the communist government, pro-Beijing supporters, and could face arrest and prosecution at any time.

Not only have I faced increased difficulties in continuing my singing career in China and Hong Kong, but the self-censorship has now spread towards global institutions and cities. Recently, the National Gallery of Victory in Melbourne, Australia, denied a venue to [a] collaborative event of Chinese artist Badiucao and myself, due to “security concerns.” The 2019 gay pride in Montreal, Canada, banned Hong Kong activists due to similar reasons. Celebrities from Hong Kong, Taiwan and China are all pressured into taking a political stance, voicing their unanimous “support” for the Beijing government on social media, and could be condemned for keeping their silence. Even the songwriter of the new unofficial ‘anthem” for Hong Kong, has opted to stay anonymous, in fear of future reprisal.

Hongkongers are now living in constant fear, and have unfortunately lost the most part of our freedoms. For a city that has been infamously known as politically indifferent, the younger generations have [taken] up the role to safeguard our home, standing up courageously to the corrupted system, in spite of increased and ruthless suppression. They have awakened other Hong Kong people, and together we have taken the world by surprise with our continued fight.

To the rest of the world, the United States is often a symbol of freedom and democracy.

The freedom Americans enjoy is something the people of Hong Kong have long hoped for. Even though our languages and cultures differ, what we have in common is the pursuit of justice, freedom, and democracy.

Through the challenges of Hong Kong, the West is waking up to China’s insinuating power [on] a global scale. Hong Kong is connected to the world in multiple ways (institutional, social, economic, personal), but China is trying to isolate it to exert control. If Hong Kong falls, it would easily become the springboard for the totalitarian regime of China to push its rules and priorities overseas, utilising its economic powers to conform others to their communist values, just as they have done with Hong Kong in the past 22 years. The US and its allies have everything to fear if they wish to maintain a world that is free, open, and civil.

I therefore urge the US Congress to stand by Hong Kong, and most of all, to pass the Hong Kong Human Rights and Democracy Act. This is not a plea for the so-called “foreign interference,” nor for Hong Kong independence.

This is a plea for universal human rights.

This is a plea for democracy.

This is a plea for the freedom to choose.

And lastly, may I quote Eleanor Roosevelt, your most beloved [former] First Lady:

“You gain strength, courage and confidence by every experience in which you really stop to look fear in the face. You are able to say to yourself, ‘I lived through this horror. I can take the next thing that comes along.’”

This is a global fight for the universal values that we all cherish, and Hong Kong is in the very frontlines of this fight. We were once fearful of what might come with our silence, and for that, we have now become fearless.”