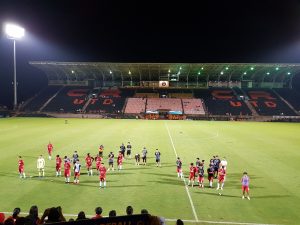 As a foreigner in Thailand there are days when I have little idea what is happening and why. Sunday night was one such time.

Eliandro and Caique were substitutes. Azadzoy was not even on the bench. From the kick off Chiang Mai basically set up as 5-4-1 with the reinstated Suwannapat and Patipan alongside Evson as the three centre backs and Chotipat and Gionata as defensive wing backs.

Decha returned to midfield and had a strong first half before tiring. Nattawut pushed up alongside the largely isolated Ronnachai.

But here was the problem. The starting eleven had scored just 8 of the 35 goals that Chiang Mai has scored this season; 4 of them from the big Brazilian centre-half, Evson.

The non-starting Eliandro, Caique and Azadzoy have 20 goals between them.

Port had played a draining 120 minutes cup semi-final in midweek. To survive in this league Chiang Mai needed a win.

Instead with this starting line up Chiang Mai were unlikely to be a goal threat so it was simply a question of when Port would break down a decently organized defense.

It did not happen during a first half of very limited action. There was not a corner for either side in the first 45 minutes.

The referee waved away a Chiang Mai penalty claim after 8 minutes after Nattawut outpaced Dolah on the left – the protests were muted.

Narit caught a couple of crosses. One at the second attempt from Nitipong.

The first shot on target was a 11th minute effort off the outside of Pichitpong’s right boot which would have crept in the near post but was a comfortable save for Worawut in the Port goal.

Port had the ball in the net after 18 minutes after Blackburn ran in from the edge of the penalty area to turn a right wing cross past Narit. Blackburn had left Patipan standing and the Port forward was ruled offside but it was a very tight call.

Josimar then got on the end of a cross from Pakorn but his stooping header was a weak connection straight into Narit’s arms. Later in the half Josimar, who was well policed by Evson for most of the game, would head over Kevin’s cross from deep on the left side.

21 minutes gone and Chotipat, who had a good first half down the left side, cut in from the left, and short of other options, shot over from 20 yards.

A committed clash after 32 minutes between Pakorn and Pichitpong left both players needing treatment. The referee saw no offense though Pakorn looked late to the challenge.

Patipan received the first yellow card after 44 minutes – not a return to the Chiang Mai side that he will have enjoyed as would become more evident in the second half.

0-0 at half time. It was all rather tentative from Port who were a far cry from the vibrant attacking team that we saw at their stadium in May.

There had not been a great deal to either write or cheer about.

Though that does not stop Chiang Mai’s traveling fans who turned up in remarkable numbers for a Sunday night game 200kms from home and who sang and cheered for all 90 minutes.

The Chiang Mai fans deserve a club that gives as much to the fans as the fans give to the club.

One snarky Port fan on twitter commented “Please tell me this is not the full turnout for the Port game.” He or she can stay nameless. The fans that make a 400 km round trip for every home game and cheer loudly for their team should be saluted not derided. A road trip that includes 50kms of very dodgy/hazardous roadworks.

Onto the second half and the first corner of the game came in the 47th minute. Worawut punching the corner clear while colliding with Chotipat.

Ten minutes later came the first Port corner as Gionata stopped Kevin. They had a good contest down the Port left wing.

Port replaced Pakorn; the Chiang Mai fans were not sympathetic.

At this stage the game was being played almost entirely in the Chiang Mai half. From the second of successive Port corners Ronnachai was floored in a packed six-yard box and needed treatment.

Then perhaps the most bizarre moment of the second half. In a game that we surely had to win and with the score still at 0-0 goalkeeper Narit was booked for time-wasting.

Steuble and Nitipong both shot high and wide from distance. Narit also saved low to his left from a well-struck Josimar effort.

70 minutes gone and Chiang Mai were hanging on. Port had a free kick 35 yards out from goal. Chiang Mai chose this moment to replace Pichitpong with Surawich. Port immediately scored. Evson slipped on the edge of the box. Blackburn was held up near the penalty spot by Suwannapat but passed the ball back to Josimar whose left footed shot from 16 yards looked to be sailing wide until it hit Suwannapat and rebounded into the bottom right corner past Narit.

The saying goes that you make your own luck. Port needed some to open the scoring but it was deserved.

A Patipan giveaway then let in Josimar who breaking towards goal was checked by Evson. The referee was lenient and only gave a free kick. The ball was played out to Bordin on the right. His cross looked innocuous, except that Patipan missed his clearance. The ball reached Josimar in a tangle with Evson and fell to Kevin to pick his spot from eight yards for Port’s second goal.

Two minutes to go and Surawich’s shot from a tight angle was an easy save for Worawut.

At the other end Siwakorn shot narrowly wide and Ko shot over as defenders backed away.

Then well into injury time the save of the game came from Worawut flying to his left to turn a 20 yard drive from Surawich away for a corner.

This was the best move of the match from Chiang Mai with Attawit’s pass into Eliandro being held up by the big forward; his attempted shot was blocked by Nitipong and fell to Surawich. The hold-up play and the threat from Eliandro was everything that Chiang Mai had missed for the first 75 minutes.

The referee blew for full time.

Port had enjoyed a much easier night than they probably expected. Chiang Mai at least for 45 minutes had looked organized but unthreatening.

There were team selection and substitutions tonight that made little sense unless explained by injuries. That hardly explains why Eliandro and Caique were held back until the last 15 minutes. It did look as though a white flag had been raised.

It is now 302 minutes since Chiang Mai’s last goal – the Caique effort against Trat on 18 August.

With three difficult games to come Port ensured that Chiang Mai have been cast adrift at the bottom of League 1.

Away trips to Bangkok and Rayong before the end of season “home” game with Buriram it may even be 2020 before we see another Chiang Mai goal.