Home→Sport→No tournament and no renovations – the 700th anniversary farce 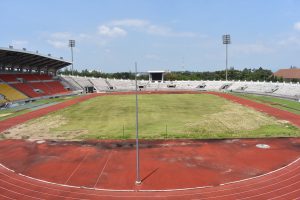 This is the current state of the 700th anniversary stadium in Chiang Mai – which was closed mid year to allow renovations to be undertaken to host the AFC under 23 tournament in January 2020. 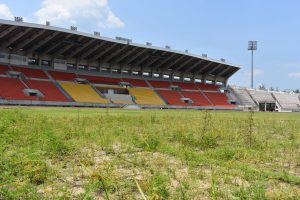 And here is the list of work that was supposed to be undertaken at the 700th Anniversary Stadium:

1) Add more seating to the stadium reducing capacity from 25000 to 22000. Only the main stand currently has plastic seating. Everywhere else is concrete.

2) At present, the stadium uses Nuan Noi grass. The grass will be changed according to the AFC regulations (which do not allow Nuan Noi grass). The drainage system will also be updated.

3) The floodlights will be upgraded to meet AFC standards.

4) Audio and visual upgrades including the scoreboard etc.

5) The dugouts will be upgraded.

6) Improvements to the dressing room, Media room and toilets.

7. Improve the landscaping around the field

But no work has been done at the 700th anniversary stadium despite the  allocation of significant funds. For four months the supporters of Chiang Mai’s two football clubs have had to pilgrimage to Chiang Rai and Lampang to watch their home teams.

Visiting the stadium today the only people there were a handful of cleaning ladies relaxing over their lunch.

Chiang Mai has now lost the hosting rights to the AFC under 23 tournament in January 2020.  Buriram will now be the fourth host in the tournament. The draw for the tournament groups and match venues is due on 26 September.

So Chiang Mai is left with no tournament and no stadium renovations despite the chaos caused for the teams, management and fans.

This farce should make people angry – sadly instead it just makes us a laughing stock of mismanagement and incompetence; which has never been explained (and likely never will be) by the officials of either the sports authority or the owners of Chiang Mai FC.

Despite it all – when we have (as seems inevitable) been relegated fans will still be watching next year.

If the club owners cared just a few percent as much as the fans of the football club then this city would be a football powerhouse.