Home→asia→Too little too late – but it was glorious 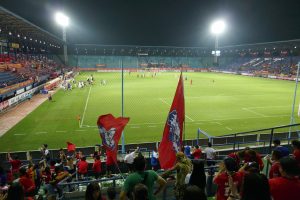 A pulsating 3-2 win at PTT Rayong on Sunday evening was, in the end, not enough to keep Chiang Mai FC in Thai League 1.

Chainat will be joining Chiang Mai in League 2 next season but wins for Sukhothai (who beat Trat 2-1) and Suphan Buri (who won away 3-2 at Samut Prakan) ensured Chiang Mai’s fate.

Yet this was perhaps the performance of the season. Full of heart, effort and no little skill. Where has this been over the last few games.

The PTT Stadium is more PTT industrial estate than it is Rayong. But it is a seven year old purpose built football stadium in a pleasant park.

Unfortunately away supporters are treated like Bangkok central jail escapees – surrounded by high metal fences and confronted by a high mesh net which makes the view from behind the southern end goal a miserable one.

Chiang Mai’s starting line-up had no place for Evson and Eliandro was on the substitutes’ bench. Worawut, Suwannapat and Patipan lined up as a back three in front of Narit. Caique returned to play as centre forward supported from midfield by Nattawut, Azadzoy and Chotipat. Gionata, Decha and Atthawit made up the rest of the midfield.

The loss, for whatever reason, of Evson was ominous; the continued omission of Eliandro remains baffling.

Four minutes into the game and the loss of Evson was quickly felt. Three defenders converged on a Abdulhafiz who still managed to get his pass away to the tall Brazilian, Dennis. Worawut, the sole remaining defender mistimed his challenge leaving Dennis to finish clinically from 12 yards into the bottom right corner. Narit in goal had no chance. It was schoolground defending and also the beginning of a 90 minute contest between Narit and Dennis.

On another day Chiang Mai might have collapsed and the defence again looked exposed when Anawin blazed hopelessly over the Chiang Mai bar from a good position.

But Rayong made the mistake of sitting back on their early lead and letting Chiang Mai take some control of the game. Nattawut’s twenty yard shot clipped the outside of the left upright with goalkeeper Peerapong beaten.

Then with fifteen minutes gone Chiang Mai broke forward in numbers. Nattawut fed the ball infield to Chotipat in a central position. As defenders backed away he had time and space to take one touch and belt a terrific dipping shot into the bottom right corner for the Chiang Mai equalizer.

At this stage Chiang Mai were dominating possession and chances. Chotipat set up Atthawit and his bouncing 25 yarder was saved with some difficulty by Peerapong.

When Rayong did break forward Dennis found himself in space but carelessly had strayed offside as Chiang Mai risked a highline in defence.

32 minutes gone and Rayong were being more adventurous; Narit did well to stand tall for Dennis’ 12 yard volley turning it away for a corner. From the corner Chinnawat was unable to direct his header on goal.

Nattawut then had his best moment of the first half when his powerful long range shot was acrobatically save away to his left by Peerapong turning the shot onto the crossbar and over. Worawut’s free header form the corner went wide of the right post.

Narit again save well from Dennis from a similar angled position to his earlier effort.

With half time imminent both teams will think they should have taken the lead; Caique got to the right by-line and his low cross reached Azadzoy who feigned right and made space on his left side to get a shot away blocked by Peerapong’s left knee. From the Chiang Mai corner Rayong broke quickly and Dennis set up Anawin who scooped the ball over the bar from close range.

1-1 at half time. It had been a strong response from Chiang Mai after conceding a poor early goal. There was much to like about Chiang Mai’s football. The ball being played on the ground with fluid passing and movement assisted by a very good playing surface.

The early second half chances belonged to Chiang Mai. Worawut volleyed over the bar from a corner; Caique broke down the right into the penalty area to see his pass just cut out by a defender; Chotipat was almost through on goal in a central position and he then set up Caique whose curling 20 yard, side-footed, shot clipped the outside of the left post.

WIth Nattawut and Chotipat both playing further forward Chiang Mai ran the risk of being caught on the break and Apiwat shot over from a good position; Narit dived to punch a cross clear, then blocked Dennis again after the forward had left Worawut in his wake. Saharat unmarked in front of goal headed straight into the Chiang Mai keeper’s arms.

Chiang Mai were going through a spell where they became goal shy – Chotipat and Caique both threatened but the final ball was lacking. Nattawut tried to pass the ball into goal. Meanwhile Decha (not really a surprise – although this was by some distance his best performance for Chiang Mai) and Patipan were booked.

WIth the run of play Rayong scored again; a cross from deep on the right by the excellent Saharat found Dennis running into the gap between Patipan and Gionata in front of goal to score with a powerful header from six yards. 2-1 Rayong and 23 minutes to play.

Apisit came on for Gionata and Ronnachai also came on up front. Here is where I get confused. Ronnachai has not scored in League 1 this season. Eliandro was still keeping the bench warm with just 18 minutes to goal in a game that Chiang Mai had to win.

As Chiang Mai pressed forward Caique’s 25 yard effort was saved by Peeraponnng sprawling away to his right.

Then the game changer. 14 minutes remaining and on comes Eliandro for Nattawut.

Four minutes later it is 2-2. Azadzoy held up the ball on the right touch line and measured his pass back to Decha. His cross was met by the leaping Eliandro who headed it down and on goal where it squirmed under Peerapong who should probably have done better.

Five minutes to go Eliandro burst into the penalty box at the right corner after Ronnachai had neatly left the ball to run to his team-mate. From a tight angle and with the goalkeeper narrowing the angle Eliandro shot wide.

Four minutes of injury time and this was to be a never say die performance from Chiang Mai. Atthawit receives the ball on halfway and chips it forward for Caique to take on his chest despite the presence of two defenders; Caique offloads the ball to Azadzoy on the right wing; his hard low cross is missed at the near post by Ronnachai but there is Eliandro thundering in at the far post to gleefully thump his shot home from six yards. 3-2 Chiang Mai.

One last effort from Rayong. Dennis holds off Worawut’s challenge and slips the ball to Apipoo, who had come on as substitute, on the penalty spot. Apipoo drags the ball wide of the advancing Narit but his shot is blocked on the line by Worawut who had quickly recovered and read the situation. There were two Chiang Mai players on the goal-line and another four in the penalty area. Great defending. It was the last kick of the game and the players collapsed. They had given everything.

The emotions of triumphing in a must win game to then find that after all the effort relegation was a certainty are hard to imagine. Chiang Mai were very good value for their win. But where has that spirit been since the 25th August drubbing of Nakhon Ratchasima.

I am not sure if the man of the match can only play for 15 minutes but Eliandro was magnificent when he came on – big, imposing, strong and clinical in front of goal. The decision not to pick or start him in recent games makes no sense.

Caique had his best game since the win at Chainat. And since he played all 90 minutes he was my man of the match.

There were strong contributions from all the team; Chotipat, Decha and Nattawut also stood out.

As football fans and supporters of Chiang Mai FC we should all be angry at the way the club has been (mis)managed this year. We have gifted six points to Chiang Rai United. We have played five home matches 200kms from home. We have fired our manager. We have had a player turnover such that just four players started both games against Rayong this season. At times our team selection has suggested that the owners have different ambitions from the coach and the players.

Yet despite all the nonsense the players have given their best – and on Sunday night they played with heart and spirit and gave some 150+ traveling fans something to remember for a long time.