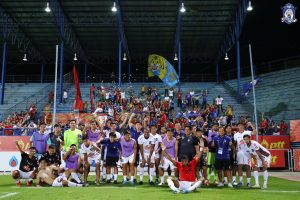 The Chiang Mai FC official facebook page posted this picture after the game on Sunday.

We are celebrating a remarkable win. But we were also – as seemed inevitable – relegated.

Eliandro is deservedly up front and center of the picture.

And your reporter is there as well……hiding near the top of the stand.

With all our away games completed in League 1 here is a short tale of life on the road with Chiang Mai FC.

The game at PTT Rayong was my tenth of fifteen away games this season. It would have been eleven until the Thai league moved the Chainat game back one day with just a couple of days notice.

But one of the lessons of the season is that changes can happen at very short notice.

I missed the opening game at Samut Prakan and our narrow 2-3 defeat.

So the first away trip was to SCG Muangthong which now seems a long time ago back on 9 March. We lost 0-2 and looked rather out of our depth. But we took a great crowd with us to a proper football stadium.

Then a hard fought 2-1 midweek win at Suphanburi. Suphanburi is a nice town with friendly people and a well appointed multi sports stadium. Yes there is a running track. But there were no barriers of fences to obstruct the view from behind the goal. Not surprisingly there was a much smaller turn out from Chiang Mai – long distance midweek games are hard for supporters; made even worse by a 5.45pm kick off.

Onto the farce of a game at Chonburi. No Evson – Tossapol went off with an injury – no defence. We lost 5-7. Down and out at 3-6 we briefly hauled the score back to 5-6 – a screamer from Wanchai was a goal of the season contender. Inevitably Chonburi finished us off. It really was not as close as the score suggests. And, though my Chonburi friends will be upset, what a miserable little stadium with a high fence obscuring the view for away fans. The good news is that Chonburi is great for a weekend by the sea.

Trat was a game too far and given our 0-4 defeat (no Evson or Tossapol) it was probably not a bad game to miss.

I was then away in the USA and missed the 2-4 defeat at Nakhon Ratchasima.

Back to Bangkok and to the terrific atmosphere at Port where we lost 1-3 but as a small consolation Ekanit scored one of the goals of the season. Port would be a great place to visit if the away fans did not have to enter and exit via a single exit on a dark road at the back of the stadium.

Our last away game of the first half of the season was our 0-4 drubbing at Buriram – but it was a treat to see what real investment can do for a club and the city that it represents.

Buriram United and Buriram are symbiotic – everywhere you go there are people wearing the club shirts – with stickers and posters in almost every shop. Compare that to Chiang Mai where we still have the 2018 season posters on some of the highways and our club shop is hidden away in a northern moo baan.

The investment in Buriram is also beginning to positively impact local tourism and infrastructure. Phanom Rung Historical Park was well worth a visit the day after the game.

So onto the second half of the season: opening up with a thoroughly enjoyable trip to Sukhothai for our second away win of the season; 2-1. Truly friendly local supporters. A good crowd despite the fact that the stadium is a drive out of town. And only our second away win of the season thanks to a twenty yarder from Ekanit and a splendid Wanmai free kick. Sukhothai is of course a lovely city to visit. After the game I walked around the floodlit old city; not another soul in sight. It was almost mystical.

This was also Ekanit’s last away game for Chiang Mai – he then played the home match versus Muangthong before returning to Chiang Rai. He is a high quality player who if he avoids injury will only get stronger and better. He also seems sufficiently down to earth to avoid the trappings of fame.

Ratchaburi followed; another weekend away and a visit to their terrific new stadium. We took the lead with a quality right foot finish from Eliandro and it was all downhill from there; a 1-4 defeat.

Next was our official (as opposed to all the unofficial) away game with our second string side at Chiang Rai. A 1-2 defeat. The winning goal ironically scored by an almost apologetic Ekanit. For Chiang Mai fans the highlight was a storming last ten minutes from Evson who came close to stealing a point through sheer bloody-mindedness.

Then we went to Chainat. Instead of Saturday night football we went to a traditional local market; watched a cut-throat game of petanque and ate by the river. The match was postponed to Sunday by when we were already in Khao Yai. A 2-2 draw with both goals from Caique. We will be back there next year.

My only missed away game of the second half of the season was the previously postponed midweek match at Bangkok United in the concrete bowl of an empty Thammasat stadium. I missed nothing in our 0-2 defeat.

The longest away trip of all was to Prachuap. A flight to Bangkok and a five hour train ride. But it was a day at the seaside surrounded by friendly people. Prachuap is a lesson in what a small motivated club can do to both stay in League 1 and win the League Cup this year. They beat us 2-0 with some ease.

Then the last away game of the season – the long haul to PTT Rayong’s fabulous stadium for our performance of the season in a 3-2 win with Eliandro eventually hauled off the bench to score twice in the last ten minutes in front of a good crowd of Chiang Mai fans who at last had something to celebrate.

So that is a quick summary of life on the road with Chiang Mai FC in League 1. Just three wins, 1 draw and 11 defeats in fifteen games. Ten points on the road. Relegation form unfortunately.

But shame all of these clubs still insist on treating away supporters as badly as possible. Restricted views, fences, remote parts of the stadium and premium prices. Ratchaburi was probably the best of a bad bunch for away supporters. Sukhothai was the friendliest to visit; shame about the iron fence obscuring the view.

Next season, bravely assuming our club continues, there will be fewer genuine football stadiums and many provincial multi-purpose grounds to visit. Issan trips will be popular to see two Khon Kaen teams, Udon Thani and Nongbua Pitchaya. There will be a genuine local Chiang Mai derby and visits to newly promoted Phrae (that will be a fun trip) and Nakhon Pathom.

But I am going to miss the away days at Thailand’s biggest clubs. There is a real atmosphere at some of the grounds and for one season we were able to see some of Thailand’s best supporters and players.

In reality the move to CR maybe did not hurt us as badly as the team selections after we got there, both home and away. It was the run of four goal-less defeats from 29 August that ensured our relegation.