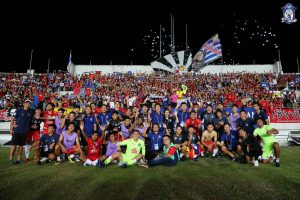 Tonight our playing staff and management celebrated as though we had won something that mattered.

Whatever they won it was not for the club, the city or in the longer term for the fans.

We have been relegated back to Division 2. After just one season in the top flight. 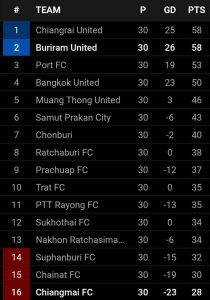 Our come from behind equalizer was dramatic. We drew against one of the big names in Thai football and against a club and an owner who are not much loved in Chiang Mai. It was a good result that the fans rightly cheered – but the post match celebrations of the players and staff were ill-judged.

A performance like this in front of a near full house (officially the crowd was 12,796 but there must have been 20,000 in attendance) should leave everyone connected with the club embarrassed at how much more could, and should, have been achieved this season.

The supporters had a draw to celebrate albeit against an average Buriram team. They deserve that at the end of a long season and it clearly mattered to many of the fans. But most of those 20,000 fans will not be there for the home games against Phrae or Samut Sakhon next season.

Our 1-1 draw with Buriram and Chiang Rai’s 5-2 win at SuphanBuri ensured that Chiang Rai United are Toyota Thai League Champions for the first time. It is also the first time in 11 years that the champion team is neither Muangthong nor Buriram.

The league title has been won in controversial circumstances with six points taken from two wins against significantly under strength Chiang Mai sides. Maybe to help justify these weakened teams Chiang Mai also fielded weakened sides in four successive goal-less defeats leading up to the last two matches. By then it was too little too late – we took 4 points from the last two games.

Chiang Rai’s success has been at the expense of our club and Chiang Mai fans should be furious. A sour taste indeed.

Chiang Mai returned to our home stadium for the first time since 12 July. There have been no renovations and the pitch which had been partially taken up has had some hasty repairs and in parts resembles a shades-of-green patchwork quilt.

Unfortunately the newer turf appears not to have taken root and some ominously large and potentially dangerous divots formed. There are plenty of helpful videos on youtube on how best to lay new turf. The Sports Authority of Thailand contractors appear not to have watched them 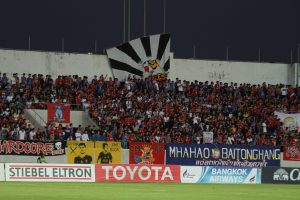 For Chiang Mai Evson returned in place of Patipan – the only change in the starting line up from last week’s win at Rayong. Just four players starting in the reverse of the 22 July fixture at Buriram. Eliandro was again warming the bench. The starting line up included five players on loan from Chiang Rai and two from BG Pathum.

Buriram kept the same starting line-up from their rather controversial win last week at home to Port.

Buriram won the first corner in the 7th minute and sought to repeat their inswinging corner success from 22 July. Narit in goal made a comfortable catch.

At the other end an Attawit cross eluded Chotipat as did Azadzoy’s low cross from the left. Barazite then broke down the left cut inside onto his right foot before a fine block by Worawut who has looked very capable over the last two weeks.

The better chances fell to Chiang Mai in the first half without testing goalkeeper Siwarak. Caique headed over from a free kick. An Evson header at the back post leading to strong claims for a Chiang Mai penalty and Nattawut blazing over from 20 yards.

The game was turning feisty with the 50/50 decisions appearing to be made in favour of Buriram – though I am reliably told this is commonplace. Yellow cards were beginning to appear. The one for Evson might take some explaining; booked presumably for time wasting while he sought to repair a divot that appeared to be the size of the Chiang Mai Grand Canyon.

0-0 at half time. A game that had plenty of niggles but little incident and with neither goalkeeper making a save of note.

The second half started with no changes on either side. Chiang Mai won their first corner.

52 minutes gone and Sasalak’s crossfield ball from the left side should have been cut out by Azadzoy. Instead Narabudin pounced and dragged the ball into the Chiang Mai penalty area. Under pressure from Suwannaphat Narubadin squared the ball to Barazite who beat Evson’s lunge and the big bearded forward made no mistake from 12 yards.

In the least surprising news of the night Decha was booked. But he worked hard all game and is another who has developed well over the latter stages of the season.

The two number sevens then squared up to each other – suggesting a bout of lightweight pugilism.. Hasagai took to the ground like a felled Canadian pine. Caique maintained the splendid look of innocent youth. The referee had no idea what had happened but decided there was no foul. Excitement over. Though Caique was to be booked later, then score and then be sent off. He had an eventful evening.

Worawut was booked in centre field – taking one for the team as Buriram broke forward. Ronnachai was booked for an agricultural challenge. Caique was booked. Apisit, on as substitute for a subdued Azadzoy, was booked.

Eliandro’s stooping header from a deep Chotipat cross was inches wide of the right-hand upright.

Chiang Mai were a threat from most of their set pieces and in the 86th minute Caique stole ahead of Siriwak to power home Attawit’s corner. The goalkeeper should have done better. It was no more than Chiang Mai deserved – though it was also their first on target effort of the match.

The irony. A Chiang Rai player on loan to Chiang Mai scores the goal that gives Chiang Rai the league title.

Caique’s shirt removal got him a second yellow card and a sending off but probably fulfilled any promotional requirements to Calvin Klein. Chiang Mai were left to play out the final minutes with ten men.

A niggly game became feisty. Rattanakorn was lucky to get away with a poor challenge on Eliandro. Evson and Jonsson squared up. A shot crept wide of Narit’s right hand upright while the goalkeeper dealt well with a number of balls hoisted into the penalty area, and blocking Apiwat’s close range effort as Buriram sort a late winner.

It seemed like the referee might play injury time until Buriram scored – but eventually he had to blow and Chiang Mai had both earned a point and also won the League title for Chiang Rai.

For a game that Buriram had to win to be sure of the title they were poor, lacking any real creativity and unable to change their game plan and style of play. The Chiang Mai equalizer was a poor goal to concede but the home team had always looked a threat at set pieces.

Chiang Mai’s players and management celebrated. For a team that has been relegated the excess celebrations left a sour taste. Evson appeared to leave the field immediately. 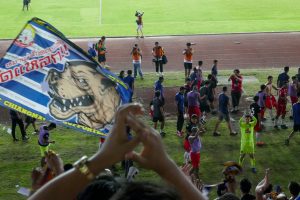 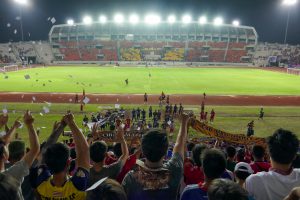 I have no idea how many of these players we will see again next season in League 2. With the same squad we could bounce quickly back again. But that feels like wishful thinking.

The Thai FA needs to address this. Chiang Rai won the league and Chiang Mai were relegated because they are controlled by the same owner. It really is as simple as that – a situation that brings the game and the league into disrepute.