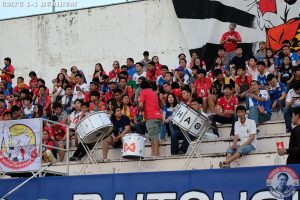 On behalf of the owners and management of Chiang Mai FC we would like to thank all of our supporters for being with us throughout the year.

A special thank you to everyone who has traveled from Prachuap to Trat to Buriram to follow and cheer our team.

It has not been an easy season.

We had no control over the need to relocate the club mid season, although we accept that the circumstances could have been better communicated. We also realise that Chiang Rai was far from convenient for home matches. Unfortunately there were no closer options that were acceptable to the League.

We also had no control over the failure to undertake renovations at our home stadium. The 700th Anniversary Stadium is under the control of the Sports Authority of Thailand. We will apply what pressure we can to continually improve the facilities for our supporters.

We also recognise that at times we have had to field a weakened team because of the loan players that were not available for certain matches. It is worth noting that it was some of those same loan players that helped our promotion to Thai League 1 in the 2018 season.

Our recruitment of Eliandro, our leading goalscorer in 2019, was a commitment to ensuring that the club would be competitive in League 1. We also sought to reinforce the squad mid-season. The moves of Ekanit back to Chiang Rai and Thossapol to Bangkok Glass were matters decided by the club’s owners and were in the best interests of the other two clubs concerned.

We understand that many fans were disappointed not just by our relegation but by some of our performances and results. This should not be a reflection on the players who have worked hard for the club all season. As owners and management the responsibility is ours.

We are happy that we were able to at least end the season in style with a win at PTT Rayong and a home draw against Buriram.

We would be happy to make a number of commitments for next season:

No increase in ticket prices in 2020.
A 50% reduction in the 2020 season ticket price for 2019 season ticket holders.
To better market the club in the community.
To play a full season of matches at the 700th Anniversary Stadium.
To communicate regularly and honestly, with our supporters.
To have no more than two loan players from any one club registered to Chiang Mai.
To be free of any outside influences over team selection.
And finally, to be competitive throughout the season with the aim of challenging for an immediate return to League 1.

Thank you again for your support. Chiang Mai su su.