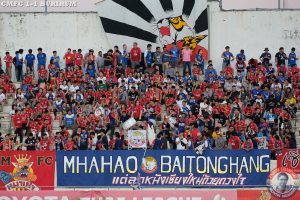 It is always interesting to see how other people look at events and activities that we may be be unable to view objectively as we are simply too close.

Paul Murphy is a freelance Bangkok based sports writer. And in this post he nails Chiang Mai FC and its owners. I might have given the best player title to Evson – for single handedly trying to hold the team together.

Eliandro has now moved to Suphanburi who will remain in League 1 – he will do well there. They are a decent team in need of a goal-scorer. He has the heart and desire to succeed there.

One of the most shameful episodes in Thai League history is the only way to describe Chiang Mai’s participation in T1 this year. The promotion of the team from Thailand’s ‘second city’ had generated much excitement but it was clear that much was wrong in the build-up to the season.

The squad comprised of 10 loan players from northern neighbours Chiang Rai United and, given the close ties between these two clubs, this was a clear indication that Chiang Mai were not standing on their own two feet.

The precocious talent of Ekanit Panya – on loan from Chiang Rai – lit up the first half the season although the Lanna Tigers struggled. After he returned to his parent club, things got tougher. Chiang Mai moved in with Chiang Rai – a mere 200km away – as renovations were supposedly taking place in their home stadium.

Despite the change, the men on the pitch fought hard but, as they neared the end with chances of survival intact, the club resorted to self-sabotage. It was apparent that another season in T1 did not appeal as several regular starters were left out.

Relegation was confirmed with one game left but there was still time for one more act of high farce. Up against Buriram on the final day, they played the spoilers role with a late equalising goal handing the title to Chiang Rai. (ed: and scored by a loan player from Chiang Rai!)

The celebrations were outrageous, not just for the goal, but long after the match. This had been a season of disappointment and embarrassment but players and staff cavorted around as if they had won a trophy, raising suspicions of Chiang Rai’s role in their motivation.

You have to feel for the fans betrayed by those at the head of the club.”