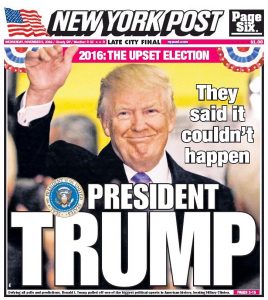 So on 18 December 2019 Donald Trump became the third US President to be impeached by the House of Representatives.

There will no be a trial in the Senate. But the Senate is controlled by the Republicans. Trump will not be removed from office. Curiously he will become the first impeached president to run for re-election as both Andrew Johnson and Bill Clinton were impeached in their second terms; both were later acquitted by the Senate.

Trump will be unhappy. He has made it clear that in his mind impeachment is a Democrat Party witch hunt.

But “impeached” will forever be written by his name in the history books. And this is not how he will want to be remembered. So what will he do – the risk is he attempts something bigger – something that he will be remembered for above and beyond being impeached.

Trump was impeached on two articles – for abuse of power and obstruction of Congress. The voting was almost entirely along party lines. It does appear that the process had little to do with evidence but much more to do the political divide that is Washington and the USA.

The House investigated Trump after a whistleblower alleged that Donald Trump may have abused the power of the presidency by withholding military aid as a means of pressuring newly elected president of Ukraine Volodymyr Zelensky to perform two favors: to pursue investigations of Joe Biden and his son Hunter,[a] and to investigate a conspiracy theory that Ukraine, not Russia, was behind interference in the 2016 presidential election.

There is so much else that Trump should be investigated for, held in contempt for or even subject to criminal investigation for. This seems trivial by comparison. Necessary. But it is an unlikely smoking gun and he is probably not the first president to suggest some sort of deal – though in this case it was clearly intended to benefit Trump.

At a rally last night, Mr Trump called impeachment “a political suicide march” for Democrats. And indeed, some fear that acquittal will embolden him, letting him enter next year’s presidential-election campaign with a sword no longer hanging over his head but rather used to carve up whoever is his Democrat opponent.

During yesterday’s debate, numerous Republicans warned that Democrats risked lowering the bar to impeachmen. But behaviour does matter and using the office of the President to solicit foreign help in elections, and, more broadly, to twist policy for personal political benefit is wrong. Even if Trump does not understand that.

Numerous Republicans accused Democrats of thwarting the “will of the people” by impeaching a duly elected president. But being elected is not a defence against impeachment, it is a precondition: people who are not elected presidents can be prosecuted. Were Mr Trump to be removed, a Republican (Mike Pence) would still be president, and all the judges he appointed would remain in office.

Trump does seem rattled. That may be more about his legacy that his re-election prospects which remain strong. The night before the vote, he sent a furious, six-page letter to Nancy Pelosi, the House speaker.

The Senate will give Trump a pass. Lindsay Graham, one of Mr Trump’s staunchest Senate allies, vowed to “do everything I can to make this die quickly.” Mitch McConnell, the party’s leader in the upper house, said that in everything he does during the process he is co-ordinating with the White House counsel. He appears to favour a quick trial, and he sets the rules.

What is clear is that US politics, like the rest of America, is unsettled, uncertain and deeply divided.