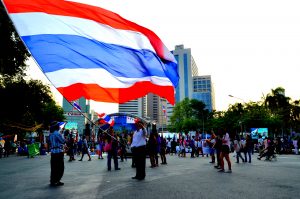 The Bangkok Post  can be a strange beast. For the most part it does not take on the Thai authorities and establishment. But occasionally it has a moment of clarity where the reality of the political situation in Thailand is laid out for the readers in a manner that makes all to clear how Thailand is governed.

And yes The National Anti-Corruption Commission (NACC) last week presented its Integrity & Transparency Award declaring the army the “most transparent” government agency on a departmental level. Of course no one actually believes that this is genuine…people simply shrug their shoulders with the message that they would do that wouldn’t they. This government is far from winning hearts and minds. But people will accept relative calm.

“Since the generals shed their military garb and donned civilian suits, political developments have gone from bad to worse and even into the arena of the absurd.

Pareena Kraikupt, MP for Ratchaburi, has kept herself in the news because she loves to bash the Future Forward Party (FFP) and got into a slugfest with its spokeswoman Pannika Wanich.

Recently, though, she has been keeping a low profile after it was revealed she held some 1,700 rai of public land. What followed has been nothing less than absurdity.

The two official agencies responsible for protecting the land in question have stepped gingerly around her and her famous father, dragging their feet in processing her case.

If she were a poor villager in Nakhon Nowhere, many are convinced she would have been dragged to court and thrown in jail in a flash.

Turn over your land to the state and everything will be forgiven, he told his colleague in so many words.

Of course, Capt Thamanat is a case of absurdity in himself, possibly even more colourfully than Ms Pareena’s.

This is the man who recently had to fend off media revelations about his shady past — his conviction in Australia on drug charges, his alleged involvement in a murder case, his close connection with a “mafia clique” in the North, and his questionable PhD degree.

While serving in the military, he was charged with misconduct which resulted in him being fired at least twice, but both times was able to get himself reinstated; a feat few could achieve.

Despite all this, the government seemed unconcerned. Capt Thamanat was allowed to keep his job and has even risen to a higher level of influence.

Both Ms Pareena and Capt Thamanat must feel safe in the knowledge that Wissanu Krea-ngam, the government’s legal wizard, is standing behind them.

Mr Wissanu agreed with Capt Thamanat. As soon as Ms Pareena turned over her illegally occupied land, she would be considered as innocent as a saint.

The legal wizard’s opinion regarding Capt Thamanat’s crime in Australia raised more than a few eyebrows. Thai laws do not reach across the country’s border, he said. So a crime committed overseas could not be a factor in vetting a new minister’s past.

Mr Wissanu has worked as a legal expert in many past governments and has written many law books that are used in law schools. That is to say, he had been well respected as a legal scholar.

But since joining the military junta under Gen Prayut Chan-o-cha, he has become one of the lead actors in this theatre of the absurd.

His legal opinions since then have started to lose traction among legal scholars. Even among the laymen, his brilliance has lost its lustre. Nevertheless, his words still carry a lot of weight in the administration.

And of course, the crown jewel of the absurd has to be Gen Prayut himself, our non-elected prime minister and non-member of the party that nominated him.

During the swearing-in ceremony, he “stumbled” in his oath-taking before the King. He said he would take responsibility for it but refused to answer House members’ questions on the matter.

Since taking the helm of state, the man has managed to eat his own words on so many issues it’s hard to keep up.

He wanted political reform; there’s been no reform to speak of. He condemned “bad” politicians; many of them are now standing by his side. And his famous words: “let me stay a little while, it won’t be long” — well, it’s been nearly six years already.

The theatre of the absurd would not be complete without the so-called “independent” organisations. It’s a close race between the Election Commission (EC) and the National Anti-Corruption Commission (NACC) as to which is the most absurd.

Earlier this week, the NACC, in presenting its Integrity & Transparency Award, declared the army the “most transparent” government agency on a departmental level.

I don’t know about you, but I’m speechless.

The image of the army that has become fixed in the minds of most Thais is the sign at the entrance of any army installation, which reads: “Military Zone, Do Not Enter”.

And remember, the NACC is the authority that decided it’s perfectly fine for one of the most powerful generals to have undeclared assets of luxury watches worth tens of million baht because they were on loan.

As for the EC, suffice it to say its performance in the past election spoke loudly of how low it can go. And it seems it has not reached the bottom yet.

The latest case concerning Thanathorn Juangroongruangkit’s loan to the FFP will be a testament to the EC having neither independence nor integrity.

A comparison can be made with another case concerning the fundraising banquet organised by the governing coalition leader the Palang Pracharath Party.

To briefly summarise, the party failed to submit the list of donors on time. Many of the donors appeared to be state enterprises and government agencies. Some were convicted stock manipulators. Some donated greater amounts than the profit their companies made.

Some donated large amounts even though their companies suffered losses. Some were contractual parties of state agencies.

Yet, the EC has not found sufficient cause to pursue action against the party.

Let’s not call this a double standard. Rather, it’s the standard of a shameless bully.

All these events taken together, under the helm of this military-civilian government, point to a more worrying trajectory, one that goes beyond the absurd and towards eventual totalitarianism.”

If in January the courts ban the Future Forward Party then Thai politics may take again to the streets.