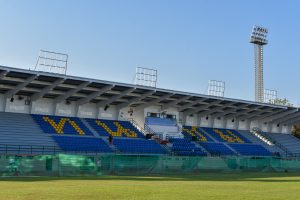 We are just four weeks away from the start of a new season of Thai football.

The opening games are the weekend of 15/16 February.

Chiang Mai, as my loyal reader will remember, were relegated back to League 2 after just one season in the top flight.

So in 2020 instead of trips to mighty MuangThong and brash Buriram there will be visits to the minnows of Ranong and Phrae. There will also be, and this might be fun, home and away derbies against Chiang Mai United, of whom more later.

Chiang Mai start the season with new owners, a new chairman, a new manager, and unfortunately with much of the same approach that holds back the development of the club within the football community in Chiang Mai.

Chiang Mai enters its 21st year basically as a subsidiary of Bangkok Glass Pathum United. Our coach, Amnaj Kaewkiew, is from BG as are 12 loan players in a squad of 22. The last two seasons have seen the club dominated by loan players from Chiang Rai United, so at least the structure feels familiar.

In 2019 we did at least start the League 1 season with a core of the team that had seen CMFC promoted from League 2. Surawich, Thossapol, Chotipat, Ekanit, Pichitpong, Azadzoy, Suwannaphat, Ronnachai, Yutthajak were all regular faces from the promotion season. And of course the manager, Carlos Perreira, was still with CMFC after the promotion season.

The 2020 squad has just two players that were with the team in 2019, both on loan from BG in the second half of the season.

Here is the initial CMFC squad with numbers – in time for the Saturday friendly against Consadole Sapporo of the Japanese J League, currently in training at the Alpine Club in Chiang Mai.

Eakkalak is the club captain. Nattawut and Apisit were with CMFC on loan for the second half of last season. Verdini was with CMFC in 2018. Otherwise this is an entirely new team.

There are 4 goalkeepers (including the Thai under-23 ‘keeper from the recent AFC tournament) in a current squad of 22.

There are 12 players are on loan from BG (let’s hope we don’t get drawn against them in either cup!).

The good news for the city is that Chiang Mai has two teams in the same league for the first time, with the renamed Chiang Mai United promoted from League 3 at the end of last season. The club was formed 5 years ago as Changphueak Chiangmai; after two years it changed name to JL Chiangmai United and for this season rebranded as Chiangmai United.

The upstart team is making a determined effort to become Chiang Mai’s team. It has recruited a number of ex-Chiang Mai FC players and more significantly has recently appointed Carlos Perreira as club manager. The Chairman, and chief source of financing, is from Chiang Mai, Chuchai Lerthpongadisorn, and just three loan players are in the current squad for the new season. The club has been training and playing a number of friendlies in Chiang Mai while CMFC share training facilities with BG.

There are a good number of people that will happily support both teams – it is quite a useful way to hedge bets for the season. It is also good to see professional sport played in the city. But call me old-fashioned. You have one club and you stay with them in sickness and in health!

Last season Chiang Mai FC had two games with near 20,000 crowds. The potential for football in this city continues to be real. It just needs a club that belongs to the city and to the supporters.

One issue that effects both clubs is that the 700th anniversary stadium is under renovation throughout the season. The pitch looks in good shape; the changing rooms, media room etc below the main stadium are all being renovated. Oddly that does not prevent friendly matches from being held there.

So both Chiang Mai clubs have had to look elsewhere for a host stadium. Chiang Mai FC will be in the heart of the city just on the north side of the moat at the venerable municipal stadium. The capacity is 5,000. There is every chance that a successful season could fill the stadium.

Chiang Mai United have banished themselves to the small Rajamangala University sports stadium in Doi Saket, about 40 minutes northeast of the city centre.

Why so little optimism? New owners, new season, new manager. This should be the time when the club engages with its fans communicating through social and established media. But there has been near silence from everyone connected with the club. The host of the club’s English language fanzine has reached out to the new owner without any response.

The first public friendly was away against Chainat in last weekend’s Leo pre-season cup. We were 0-2 down after ten minutes. To the players’ credit they did not give up and eventually lost 1-2. But it was a poor game.