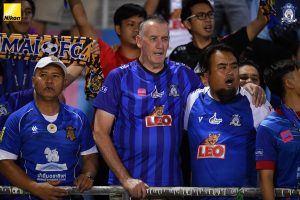 A confession first. I watched this game on television; with visitors in Chiang Mai this was not a weekend that I could get away.

But watching on TV was quite inciteful. The giggling commentators spent the first 15 minutes referring to Chiang Mai as BG. We will have to get used to that; and our starting line up did include 6 loan players from BG.

So no detailed report here. Just a few highlights.

Nattachai redeemed an earlier fresh air effort with a smartly taken goal after 21 minutes sweeping in a shot after Verdini had caused some chaotic defending from a Tassanapong cross.

At the other end Ilic, unmarked in front of goal, headed straight at Korraphat who shoveled the ball clear.

Shortly before half time Nattachai’s effort hit the crossbar and he picked up the rebound only to shoot against the left upright where it ran across the goal line to be cleared by Ilic.

CMFC dominated much of the first half. There was plenty of movement; Ryo was a constant threat and Pratya looked good on the right side.

The second half was to be dominated by the home side led by substitute Kabaev who made a real difference when he came on.

CMFC were lucky to escape a 58th minute penalty when Verdini was alleged to foul Sarawut. The foul was at least two yards inside the penalty area but the free kick was given just outside. Hard to tell what assistance the linesman gave the referee. The tv commentators were laughing. Over a season these moments of incompetence probably even out.

Samut Sakorn had already hit the post twice before they scored – a speculative cross that Korraphat misjudged and a close range turn and shot from Kabaev.

Some of the home club tackling had also become rather agricultural – Kovic’s challenge on substutute, Sadney, probably the worst of all as he took off and threw himself at the Namibian striker. Kovic was quickly substituted.

Samut Sakorn’s overdue equaliser came in the 77th minute; Kabaev turning in a cross from Sarawut at the far post.

Last minute; last effort from Samut Sakorn. A speculative ball forward is headed on to Tanawut who has time to turn and lob the ball to the far post where unmarked Banovic heads into the ground and the ball is somehow spooned into the goal by Korraphat. 2-2.

Probably a fair result on the night. Both teams have work to do but for Chiang Mai there were encouraging signs after two fairly dismal public friendlies.