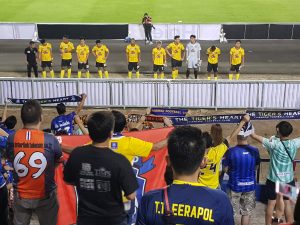 Some fifty fans had made the long journey from Chiang Mai. As always, and despite a disappointing result, they were a credit to the club.

Both teams made two starting changes from last week. CMFC bringing in Apisit and Sadney for Nattachai and Samroeng. For Nakhon Pathom ex Chiang Mai favorite Mustafa Azadzoy was among the substitutes with Apirat and Prasert making their first starts.

Nakhon Pathum were promoted from League 3; Chiang Mai were relegated from League 1. It is an indication of how tough this season will be that the teams were well matched, with limited quality.

The early pressure came from the home side, earning the first corner before dos Santos fell in the area under a challenge from Aukkee. He fell too easily but, as a commentator might say, I have seen those given.

Ryo looked Chiang Mai’s most likely threat throughout – but he does try to win the game on his and can ignore other options. Through on goal in the 12th minute he was forced wider by the goalkeeper, Nopphon (on loan from Buriram) who then made a fine block to deny the Japanese forward.

Four minutes later a big let-off for Chiang Mai when Prasert, wearing 88, should have opened the score for Nakhon Pathom. The home side’s best attacks came down the left side; this was no exception. Dos Santos slipping a neat pass to Nattapon whose dinked cross onto the six-yard line was met by the head of the unmarked Prasert who somehow managed to head the ball wide.

Linking well up front Sadney and Ryo set up Kongnateechai with a smart pass that the forward tried to slide past the advancing goalkeeper who stayed big and saved with his legs.

On the half hour Nopphon excelled leaping to his left to claw-away one-handed a left footed curler from Sadney that looked bound for the top corner. A super save.

Kongnateechai was stretchered off in the 33rd minute. A loss for Chiang Mai as he makes intelligent runs creating space for those around him. He was replaced by Alex Rafael who drifted too deep and wide to be a significant goal threat.

Maybe unsettled by the injury Chiang Mai looked uncertain; Prasert set up Nattapon who blasted over the crossbar before the home team took the lead in the 37th minute with the simplest of goals. A right sided free kick forty yards from goal was hoisted high and floated into the penalty area. Korraphat started to come for it. Reconsidered. Ablon, attacking the ball while others stood, headed home from six yards.

Half time and Chiang Mai were a goal down. In a game of fine margins this one might have turned on Nopphon’s terrific diving save. 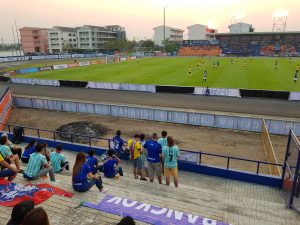 The second half opened with another penalty claim – this time for a foul on Ryo. The protests were muted.

Depressingly the Nakhon Pathom time-wasting started as early as the 50th minute – just how long does it take to walk across the pitch to take a corner and why are corners taken by the player furthest away from that corner? The referee simply allowed this to continue for forty long minutes.

At this point Chiang Mai were their own worst enemy. Given a free kick in almost the identical position from which the home side had earlier scored Chiang Mai simply passed the ball backwards and then gave up possession. This became a feature of the second half.

Meanwhile a 25-yard Nakhon Pathom free kick was hit straight at Korraphat who gathered the bouncing ball with some difficulty.

Sixty minutes gone and Ryo’s stretching volley as he tried to lob the goalkeeper was gratefully caught by the home goalkeeper.

Azadzoy replaced the increasingly annoying Prasert and added some much-needed class to the game. His 77th minute effort from 25 yards was acrobatically turned over the bar by Korraphat and in the 82nd minutes his perfectly weighted pass allowed Dos Santos to slot the ball into Korraphat’s bottom left corner. 2-0. Game over.

There was still time for the Chiang Mai defense to play a few more square passes and to give away possession.

Chiang Mai had looked lost through much of the second half. The coach appeared unable to make any changes to how the team played. There are no obvious leaders on the pitch – no one who is going to drive the team forward. It was all rather passive.

Up front Ryo and Sadney had lost whatever understanding they had and neither was able to retain possession long enough to build a serious attack. After a number of good first half saves Nopphon in the Nakhon Pathom goal had a very quiet second half.

Of course, there is a long way to go – but this looked too much like the Chiang Mai of pre-season rather than the team that played some fluent football against Samut Sakhon.

One more note; at kick off the AQI was an unhealthy 157. It is time that the League started considering how bad the air quality has to be to be unfit for the health of players, officials and spectators.

With two big home games coming up we may know rather more about this Chiang Mai FC squad and their ambitions by this time next week.