This game also saw Chiang Mai FC happily return to their old home in the heart of the city at the Municipal Stadium. Fans are closer to the action. The atmosphere is much better than at the often largely empty stands of the 700th anniversary stadium and there have been real improvements made to the stadium facilities.

The only disappointment is the shambolic temporary stand built for away supporters in the far and darkened distance behind the north goal. At least this afforded the Kasetsart fans the best possible view of all five second half goals. 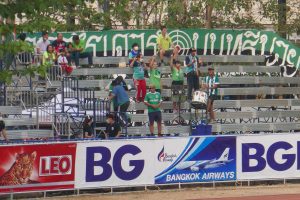 Kasetsart arrived having smacked Samut Sakhorn 5-0 on Sunday. Confidence should have been high. They were poor.

Chiang Mai threatened with an early inswinging free kick which Chukiet had to come for injuring himself in the collision of bodies on the six-yard line. The ball was cleared off the line as the referee blew for a free kick; the keeper then receiving lengthy treatment.

The first corner did not come until the 16th minute for Kasetsart and was commandingly cleared by Verdini who had his most effective game so far this season.

Chiang Mai were enjoying the bulk of possession but without looking a threat winning their first corner only in the 30th minute. Apisit’s inswinger was pawed at unconvincingly by Chukiet and then cleared.

A tactical change saw Chiang Mai dominate the rest of the first half; Sadney moved wide left allowing Ryo to roam through the middle. Ryo blasted over the bar from 20 yards before a long-range free kick whistled past both Chukiet’s dive and the right post. Atthawit skied a 22-yard free kick over the crossbar.

Sadney by now had the run of the left side; skipping a tackle in the penalty area before the ball was cleared; hitting a cross just beyond Nattachai arriving at the back post and cutting a ball inside for Ryo who fell near the penalty spot though no foul was given.

Despite all the late pressure Kasetsart held on for 0-0 at half-time. But it had looked like when, rather than if, Chiang Mai would score. 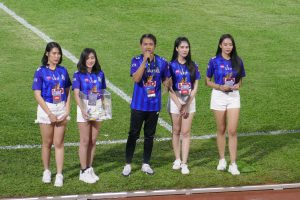 ‘When’ happened very early in the second half. 47 minutes gone and a cross from the right reached Atthawit. His first touch allowed the call to run away from him and he and Kasetsart defender, Rattapon, both challenged hard for the loose ball in the penalty area. Both players were hurt. The referee awarded a penalty. It looked harsh.

After a long wait for treatment to both players Ryo, as calmly as you like, chipped home the penalty kick. 1-0.

At this stage it was the Ryo show; he was a constant threat. Breaking into the penalty area he fell under another challenge. No penalty. Ryo looked less than impressed.

61st minute and Nattachai breaks forward; bounding down the right and hits a cross that bounces off the heels of Rattapon for Ryo to instinctively loop his header over the goalkeeper. 2-0.

Nattachai tried the same run down the wing four minutes later and was pulled down by Henri Joel; the referee, who appeared to have forgotten his cards for the evening, awarded only a free kick which was punched clear by Chukiet.

Ryo turned provider in the 66th minute. Eakkakuk eased the ball to Ryo left of the penalty area who had time to pick out, and drag the ball back, for the unmarked Sadney to side foot home from six yards. The Kasetsart defense had all but given up. 3-0.

A brief moment of activity for Korraphat at the other end saving with his feet from substitute Surachai who latched onto a long cross ball and tried to beat the Chiang Mai goalkeeper from a narrow angle.

Chiang Mai continued to press forward – a high press that did not allow the Kasetsart defense to settle. Ryo’s 20-yard shot was an easy gather for Chukiet. A four on two break saw Apisit hit his cross too close to the Kasetsart ‘keeper.

With seven minutes left the referee awarded a second penalty to the home team. The ball broke in the areas to substitute Nattaphoom and his shot was blocked by a combination of the body and hands of Pharanyu. No arguments this time.

With Ryo already substituted Nattaphoom stepped up to take the penalty calming rolling it into the keeper’s bottom left corner. 4-0.

85 minutes gone and Nattachai’s low cross from the right picked out Nattawut, one of three Chiang Mai forwards in the penalty area, despite the game being well won already, and he tapped in a simple fifth goal to complete the rout and send (almost all) the crowd of 2,425 home happy.

The changes made by coach Amnaj worked. It suggests that he has a large squad of players that can be called upon. Meedech, (ex Thai Honda) looked solid on the right side of the back three. Samroeng was everywhere on the right side from full back to pressing forward. Atthawit looked good when he joined on loan last season and that form continues. Up front Nattachai, Ryo and Sadney looked fluid and direct.

There was more variety to Chiang Mai’s football tonight – and more pace and incisiveness. There will be much tougher opponents than Kasetsart probably starting with the game on Saturday against Khon Kaen United. But there was much to like about this performance and the team does appear to be coming together.