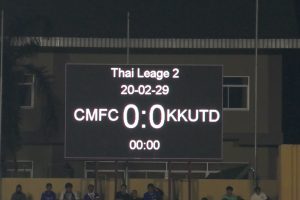 (If only they could spell League – two weeks in a row!)

Promoted from League 3, which they won at a canter, Khon Kaen United arrived unbeaten in Chiang Mai after two home wins and a draw away at Chainat.

Chiang Mai made just one change from the side that over ran Kasetsart in midweek with Tassanapong in for Siwakorn. Khon Kaen made four changes replacing Nigerian borne Bahraini international Jaycee John, Paulo Conrado, Suwit, and Arthit.

Setting up with a back four and the man-mountain, Douglas Cobo, just in front of the back line Khon Kaen were organized, solid and looking to ensure they were not dominated in midfield. They are not pretty to watch.

Cobo, in fairness, was very good indeed. In his third season with Khon Kaen United he was at the centre of everything KKU did; for a big man his control and distribution are every good and he is strong, at times shrugging off three tacklers with ease.

As a game, there was a great deal of huffing and puffing, but the defenses dominated. Korraphat in the Chiang Mai goal did not have a single shot to save. At the other end Wichitchai had one shot to save which he fumbled for the game’s only goal.

Opening skirmishes were led by the away side with Tana lively for Khon Kaen; his skied free kick after eight minutes was less impressive. He also pulled a drive wide of Korraphat’s right hand post after 13 minutes.

Cuerva then failed to connect with a header on the six-yard line from a Laksana cross.

A fine clearing header from Sadney was needed to clear a dangerous in-swinging free-kick.

At the other end a long raking pass from Eakkaluk reached the lively Samroeng whose low first-time cross evaded everyone but did lead to Chiang Mai’s first corner.

For Khon Kaen Tana broke from the half way line but selfishly failed to see unmarked colleagues on his inside as he ran instead into a posse of defenders.

As against Kasetsart Chiang Mai started to threaten towards the end of the first half. Sadney beat the offside trap and the onrushing goalkeeper to reach a Nattachai header but was unable to control the ball as it passed harmlessly wide of the left upright.

A great block in the penalty area then denied Nattachai as he looked to turn in Ryo’s short pass.

A second Khon Kaen booking took the game to a half-time 0-0 stalemate.

The second half saw no immediate changes in either the players or the nature of the game. Chiang Mai needed to be patient if they were to break down the Khon Kaen defense.

Tana, again, at the other end hit his low cross from the left in front of his forward line.

A fabulous tackle by Adisak then denied Sadney as he broke into the Khon Kaen area.

70 minutes gone and coach Amnaj brought on Nattaphoom for Nattachai. It was a straight swap but added fresh legs and a goalscorer who is in form.

For Khon Kaen, Cuerva rose for a corner at the far post but could not direct his header on goal.

The only goal of the game came in the 76th minute – Sadney chipped a cross from the left side; it looked too deep, but was collected by Samroeng, who dragged the ball back with his right foot and left fly a firm left-footed shot from a narrow angle. Wichitchai could only parry the ball dangerously upwards and behind him. Nattaphoom was far more alert than either Wichitchai or Laksana and bravely got his head to the ball to force it over the line. It was not pretty but it was the goal of an in form forward.

Laksana, maybe frustrated, then hacked down Nattaphoom for a deserved yellow as Chiang Mai played out time.

The injury time substitution of Ryo by Aukkee seemed to anger the big Brazilian Cobo, who tried to encourage Ryo to leave the pitch. Unimpressed Ryo squared up to Cobo; which looked more than a little strange as the Japanese forward is rather shorter than the 1.87metres Brazilian. There was a bit of shoving. Both players were booked and the referee then called time.

A good win for Chiang Mai.

Samroeng was excellent throughout and set up the goal with a rare moment of flair. Ryo was quiet by his standards this season – but the Khon Kaen United back five were always going to be hard to break down.

In the back three Verdini and Eakkaluk were composed throughout and Meedech after some loose early passing improved as the game went on.

Once again there was much to like about a side that looks resilient, can win difficult games, and where there is 100% commitment.

The crowd are also behind this new team. 2,537 at the Tessaban made plenty of noise.

There are three games and plenty of travel between March 7th and 14th (Ayutthaya A, Navy H, Ranong A).

Winning on the road is likely to determine the promotion places this season.