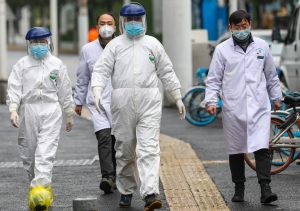 The disconnection between the ruling and political classes and the majority of people around the world has, in modern times, never been more stark than in our response to the coronavirus pandemic.

Two things are needed. People need to get angry. And globally our value systems, our understanding of what matters, of right and wrong, needs a fundamental shift.

Too many people in gilded towers are deciding what should be done across society. And they are failing. Closing businesses, locking down communities may work for a few; but all many countries have succeeded in doing is creating a massive displacement of society and significant economic hardship.

It started with the basics: wash your hands and keep your distance. But millions of people lack the water necessary for the first order and the space for the second.

Next: stay home. How? Only the few can work from home. Many live in shockingly overcrowded communities where staying home may be a greater risk. But governments like that – they can shutdown those communities as the Gulf nations have done with the migrant labour camps or the Brazilians with the favelas – trying to keep the virus within those communities as if their lives matter less.

Take this as a reasonable estimate. One billion people make up the ranks of the urban poor surrounding big cities, 80% of which are located in Asia and Sub-Saharan Africa. Water is also increasingly scarce in many countries of Sub-Saharan Africa and the Middle East, mainly due to climate change.

The connection between low incomes and a high incidence of a series of different diseases should not be a surprise – it is our acceptance of this that is so shocking.

Poverty and war push millions of people to leave their countries – they are met by border closures, walls, electronic barriers, deportations, pressures and payments to other countries to not allow the immigrants through.

How on our earth is this the decent thing to do?

A few weeks ago police forces and the local population of Lesbos, a Greek island, were turning away asylum seekers and immigrants arriving from Turkey.

The scenes that take place in the improvised refugee camps set up for those fleeing from Myanmar, Yemen, Syria, Afghanistan or Venezuela can now be seen in Italian, Spanish, British and American hospitals: sick people lying on the floors of hospitals that do not have the resources to treat them.

The situation will only worse as donor nations cut back on their development and humanitarian aid programs in the near future with the aim of redirecting this aid to their own needs.

Coronavirus is the wake up call that reveals the reality of a globalisation that was supposed to benefit us all.

9.5% of the world’s population controls 85% of the planet’s wealth. Sure coronavirus may dig deep into this group but often for different reasons. This is the group that travels globally, shakes lots of hands. But for this group isolation means Netflix, home delivery, private healthcare and pasting videos onto youtube showing how they take care of the rest of us by staying home and playing in the oversized backyards. For billions of others it implies a series of exponentially growing dramatic dilemmas.

Falling ill is always complicated for those who live off precarious jobs. Companies are closing for an undetermined amount of time. Layoffs and furloughs effect so many – but those without savings or security are hardest hit.

The International Labour Organization estimates that over 60% of the workers on the planet hold informal jobs. This means that 2 billion people, most of them in the Global South (although it is a growing tendency in the North) lack social protections, workers’ rights and decent working conditions.

They are the vulnerable.

In India millions of domestic migrant workers found themselves trapped under the Governmental order to stop working and to go home to lockout.

With no transport available, masses of packed people were walking long distances with high risk of infections among them. One temporary worker told BBC: “I have no options. Either I starve because I don’t have a job, or I catch the virus.”

Thailand was the same. Bangkok – the economic powerhouse of the country, shut down. Hotels, bars, restaurants, massage shops and so many others shut overnight. These are the places that employ casual labour – and without work where would they all go? Home to their provinces in overflowing buses and minibuses.

People who live from one day to the next, who can only eat or feed their family if they sell or traffic something, and they cannot keep a safe distance. They also cannot bulk shop, fill freezers, home school their children, care for ageing relatives. But that is the expectation. All they want is to go to work and care for their families.

Since the 1980s the predominant economic and political ideology has been to  limit the State and the social welfare system while promoting the private sector. Wage gaps have grown exponentially while the financial economy has found ever more effective forms of tax evasion and tax exemption.

The 2008 financial crisis led to harsh cutbacks on states’ healthcare, education and other public services, as well as on environmental research, science and technology.

Huge sums were used to rescuing the banks and to preserve the financial system that was largely responsible for the crisis. Cutbacks in social funding weakened healthcare and prevention systems in countries like the UK, Spain, Italy, Greece and Portugal.

Just over a decade later people are paying the price for decisions made at that time.

Since 2008 inequality has continued to increase worldwide. Fewer people accumulate and reproduce their wealth while millions of people are left behind with less access to well-paid jobs, public services and no possibilities for social advancement for themselves and their descendants. The USA has headed down this path and four years of a Republican President have damaged the nation’s health care system and trust in the government. The President treats the response to the pandemic as an election rally; leaving the tough issues to be managed by state governments.

Isolated in their neighborhoods and their offices, the global wealthy are making decisions that affect people that they have no connection to, while often using the media that they control to manage the message and to shape the debate.

Coronavirus should serve as a wake up call. When this crisis ends, “markets” should not be allowed to impose austerity measures, including cuts to spending on healthcare, as the only path to recover from the recession and the losses.