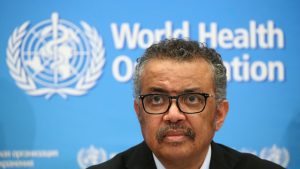 Reuters: Director-General of the WHO Tedros Adhanom Ghebreyesus, Geneva, Switzerland

Last week US President Donald Trump’s move to halt funding to the World Health Organization over its handling of the coronavirus pandemic prompted condemnation from world leaders as recorded global infections passed the 2 million mark.

There is a global pandemic, the likes of which we have never seen.

And the US President’s response is to cut funding to the organisation leading the global fight.

Trump alleged that the WHO, which is based in Geneva, had promoted China’s “disinformation” about the virus causing a wider outbreak than otherwise would have occurred.

The WHO’s special envoy for the outbreak, David Nabarro, said that any recriminations should be left until after the virus has been defeated.

U.N. Secretary-General Antonio Guterres said now was not the time to cut resources for the WHO: “Now is the time for unity and for the international community to work together in solidarity to stop this virus and its shattering consequences.”

EU foreign policy chief Josep Borrell said on Twitter: “Deeply regret U.S. decision to suspend funding to WHO. There is no reason justifying this move at a moment when their efforts are needed more than ever.”

New Zealand Prime Minister Jacinda Ardern said the WHO was essential to tackling the pandemic. “At a time like this when we need to be sharing information and we need to have advice we can rely on, the WHO has provided that,” she said.

The World Health Organization warned the US and other countries about the risk of human-to-human transmission of Covid-19 as early as 10 January, and urged precautions even though initial Chinese studies at that point had found no clear evidence of that route of infection.

Technical guidance notes seen by the Guardian and briefings by top WHO officials warned of potential human-to-human transmission and made clear that there was a threat of catching the disease through water droplets and contaminated surfaces, based on the experience of earlier coronavirus outbreaks, such as Sars and Mers.

Meanwhile Trump has attempted to blame the WHO for the pandemic, pointing to a tweet from the group on 14 January saying there was no human-to-human transmission.

“In many ways, they were wrong. They also minimised the threat very strongly,” the US president said, before threatening to cut funding to the organisation.

Trump supporters have been calling for the resignation of the WHO’s director general, Tedros Adhanom Ghebreyesus, and for a congressional investigation of the body’s performance.

The 14 January WHO tweet reported “preliminary investigations conducted by the Chinese authorities have found no clear evidence of human-to-human transmission.” But in the same week top WHO officials were briefing health leaders around the world to keep looking out for signs of such transmission, and to take precautions as if it was already happening.

But there is so much more to the WHO than a tweet. There is a whole network of medical and health specialists connected through technical guidance notes published by the WHO. Two were issued on 10 and 11 January when suspected infections in China comprised a few dozen cases.

The notes lay out detailed clinical criteria for dealing with suspected cases as well as warning of the risk of ease of transmission both by airborne droplets and contact with contaminated surfaces, suggesting isolation procedures.

As well as being posted online, the guidance was sent to the organisation’s regional emergency directors and country heads to be circulated to senior health officials.

One note, published on 11 January, advised clinicians and health officials to be alert to the emergence of clusters of cases as well as any “evidence of amplified or sustained human-to-human transmission” despite the Chinese, at that stage, not reporting sustained local transmission.

While the document advised medical personnel to look out for suspected patients who might have travelled to China’s Hubei province, or health workers who had contact with the then new virus, it also recommended that doctors look out for “unusual or unexpected clinical course, especially sudden deterioration despite appropriate treatment” regardless of those factors.

It added caution even if another clinical explanation had been advanced that appeared to “fully explain” the patient’s symptoms.

A day earlier, another guidance note on collecting samples from patients showing symptoms of the disease listed stringent precautions to avoid the risk of human-to-human transmission, using the experience from the Mers coronavirus.

The documents add to a body of emerging evidence of the widespread early warnings about the coronavirus, many communicated by, and to, senior US officials, which were ignored by Trump.

The WHO declared a “public health emergency of international concern” on 30 January, a day before Trump banned non-American residents who had been to China from entering the US. Trump’s ban on flights from China still allowed in 40,000 travelers after his announcement.

Nearly a month after the WHO declaration, Trump tweeted: “The coronavirus is very much under control in the USA”, adding that the WHO had “been working hard and very smart”.

Tedros has urged governments not to politicise the pandemic, warning on Wednesday: “We will have many body bags in front of us if we don’t behave.”

In a briefing at WHO headquarters on 14 January, the same day as the tweet about the Chinese results, the organisation’s technical lead on Covid-19, Maria Van Kerkhove (who is an American), told reporters that while there had so far been only limited human transmission between family members in China, the risk of wider human-to-human transmission should not be regarded as “surprising” given the similarity to earlier Sars and Mers outbreaks.

An investigation in the Washington Post last week discovered a warning from US officials at the beginning of January relating to the threat of coronavirus.

On 3 January Robert Redfield, director of the US Centers for Disease Control and Prevention (CDC), spoke with his Chinese counterpart, George Gao, and was alerted to the newly emerging disease, becoming concerned enough for the CDC to establish an incident management structure for the new coronavirus on 7 January and activating its emergency response structure two weeks later, on 21 January.

Despite that move by the CDC, a day later Trump was insisting the situation was under control. “It’s one person coming in from China, and we have it under control. It’s going to be just fine.”

Staying home is the only way, without huge test/trace/quarantine efforts, to avoid mass infections. “Business as usual, but careful” won’t do it, and neither will only testing people who need to be hospitalized. There is a very long road ahead.