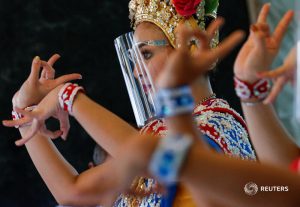 With a low rate of infection and a very small number of deaths from the coronavirus there are strong calls for Thailand to re-open her economy. But this will be hard when so much of the economy is dependent upon foreign tourism.

Before the COVID-19 outbreak, Thailand’s capital was the world’s most visited city. Thailand received 40 million tourists in 2019 – including 11 million from China.

Those numbers are already decimated in 2020. And even with a partial relaxation of border controls may still be in single figures in 2020.

With its struggling economy, the timing of the crisis could not be worse for Thailand. It is likely that the Thai economy will be the worst affected in the ASEAN region.

Everyone in Thailand is being affected by the sudden economy-wide disruption — even big business houses like the Central group. But those worst affected are the people in Thailand’s massive cash economy –  day laborers; tuk tuk and taxi drivers; street vendors. All jobless following the shutdown of the country’s $60 billion tourism sector. The majority of them working without either a formal contract or salaried jobs.

Inequality in Thailand is rife and will only get worse as people deal with a high burden of household debt and/or no regular income. The bottom 50 percent of Thais had a meager 1.7 percent share in the country’s wealth. Contrast this with 85.7 percent share enjoyed by the country’s richest 10 percent.

The COVID-19 outbreak will only deepen these inequalities with increasing and possibly prolonged unemployment; the queues for food handouts are testament to the problems faced by so many people.

Compared to its ASEAN neighbors, the number of infected individuals in Thailand is officially low.

How real those numbers are is unclear but what is certain is that hospitals are no being over-run and there is no obvious shortage of PPE.

The government has put in place some support provisions. The country’s 11.7 million salaried employees are eligible for the Social Security Fund. There are also provisions to support income for those in informal employment at 5,000 baht per month ($153) for three months.  This led to 27 million people applying online over the past two weeks for the cash handout.

Approvals were initially slow. But 13.4 million Thais will have received an initial 5,000 baht cash subsidy by next week.

It was back on 13 January 2020, when Thailand made the first confirmation of a case outside China. The first reported local transmission was confirmed on 31 January.

Surprisingly the number of cases remained low throughout February, with forty confirmed by the end of the month. Thailand was still receiving many Chinese visitors.

Thailand was dealing with the third-highest number of confirmed coronavirus infection cases after China and Singapore, within four weeks of reporting its first confirmed case of the COVID-19.

Some restrictions came early including a shutdown of domestic sports and a ban on large gatherings – the last domestic league football was played on 1 March 2020. But domestic flights were operating largely as normal throughout March.

Cases saw a sharp increase in mid-March, which was attributed to several transmission clusters, the largest of which occurred at a Muay Thai fight at the Lumpinee Boxing Stadium on 6 March.

Confirmed cases rose to over a hundred per day over the following week, and public venues and businesses were ordered to close in Bangkok and several other provinces.

The Thai government’s response to the outbreak was initially based on surveillance and contact tracing. There were no resources for mass testing and even at the end of April testing appears limited to healthcare professionals and to those with suspected symptoms.

One thing Thais were doing early and widely was wearing masks – less so anglo saxon visitors and some longer-term residents who for some reason thought that Thai common sense did not apply to them.

Thais and residents returning from high-risk countries were encouraged to self-quarantine but travel restrictions were not announced until 5 March, when four countries were designated as “disease-infected zones” and travellers subject to quarantine.

Further restrictions were announced on 19 March, requiring medical certification for international arrivals, and also health insurance for foreigners. These regulations were basically enough to ensure that foreign arrivals stopped as the health certificates were near impossible to obtain.

The Thai government did much that made sense – but enforcement was patchy and too many departments seemed to work against eachother rather than together. This led to some criticism of various aspects of its response to the crisis.

In early February, in response to concerns over hoarding and price gouging of face masks, the government issued price controls and intervened in their distribution. The move failed to prevent shortages among hospitals, and became a scandal over perceived corruption and siphoning of supplies.

Criticism was also aimed at the government’s inconsistent policy over international travel and quarantine requirements, indecisiveness and slowness to act, and poor communication — many official announcements were made available to the public, only to be quickly retracted or contradicted by other government units, and later changed.

Statements made by the Minister of Health were unhelpful suggesting that this was an infection brought to Thailand by foreigners.

The abrupt closure of Bangkok businesses prompted tens of thousands of workers to travel to their hometowns, risking further spread and reflecting the failure among agencies to coordinate a unified response. The public reaction was no surprise and should have been foreseen.

Overnight and across the country malls, restaurants, bars, cafes were closed. Those who could do so were asked to work from home. Staff had no income; no work. They caught transport to their home towns while they were still operating.

This was followed by a near ban on travel between provinces. Many provinces such as Buriram and Chiang Mai banning outsiders from entering. Some villages also set up manned barricades to keep away outsiders.

Domestic flights ground to a near halt. In April there were just two flights a day from Bangkok to Chiang Mai and passengers arriving from Bangkok were expected to home quarantine for 14 days.

A ban on the sale of alcohol was introduced before Songkran to try and halt any unnecessary gatherings. When that ban was removed on 2 May there was an equally predictable crush at supermarkets and wholesale stores as people stocked up fearing a new ban.

As of May 3rd there has been a partial re-opening of businesses under specific conditions; malls remain closed; the state of emergency and curfew are still in place.

Thailand’s infection numbers and small number of deaths do feel like a parallel universe compared to Europe or the USA. Some of that is down to actions taken and enforced by the authorities. Some down to the instinctive behaviour of the Thai people – the lack of physical contact such as hand-shaking – and the wearing of masks. Some down to having an extensive and respected public health system. Some, perhaps, sheer good fortune.

Whatever happens next – as restrictions are relaxed, hopefully our good fortune will not suddenly run out.