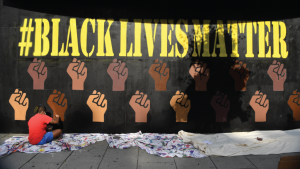 When I was a teenager my father went to work in Nigeria. I was banished to boarding school in the UK.

The school was white privilege almost throughout. Rich parents. Strong military links. I cannot recall one non-white member of staff. A few of us were there because companies still paid school fees to keep senior executives overseas. The full name of the school even included the words – Imperial Service College. Think about that for a minute. It had been my Dad’s school. It was meant to build leaders – as long as those leaders were white.

Robert quickly became “Wogbert”. It was meant to get under my skin. It did. But there was little I could do. Me against the machine. My alliances tended to be with other kids who had parents overseas. People that had some empathy.

Twice a year I would fly out to Nigeria. The golf course had caddies. Though at least by that time most of the members and committee were Nigerian.

Dad was interesting – I genuinely think that he never saw the colour of someone’s skin. Whether it was helping people in the office; joining the work’s cricket team (yes there was one!) or playing in the factory table tennis tournament. He expected no special treatment. He was a loner – he did things his own way – he was never very fond of authority figures and managed down far better than he managed up. A trait I inherited.

But it is impossible to deny that we have our own built in prejudices – that being white has been privileged – to the victor goes the spoils.

One day in, I think, 2002 I was walking back to my hotel in San Francisco. A black man in a smart looking suit is looking a little distressed. He asks me if I can help. I stop. Something is wrong with his car. He points to a car on the other side of the road with (I think) a family sitting in it. In hindsight it is all a little implausible – why does this smart looking and sounding guy not have a wallet? He needs money to get a cab to take them home. So I give him US$20. It was the only note I had.

Did I do it because I was concerned for the family or for my safety?

He asked for an address so that he could send me the money. That never happened.

Why do I remember that two decades later?

I have lived over half my my life away from the UK. In Canada, where race is far better integrated that almost anywhere else in the world. In Hong Kong, Thailand, Singapore and the UAE.

“Christmas need not always be white. Black is beautiful” read a Lagos Christmas card. When our car was attacked on the Ikorodu Road into Lagos – and a crowbar smashed into the windscreen – my Mother’s biggest shock was the “that fucking bastard” that I yelled from the back seat. It was almost certainly our skin colour that made us a target. White privilege in a foreign land.

People ask where I am from – honestly – saying I am from the UK is embarrassing. I will say I was born there. I will add that I moved to Canada 32 years ago. That I am Canadian. I am from a land built by immigrants from all over the world. Though even saying that  there is clearly a disproportionate impact of police violence and racism on Black and indigenous people across Canada. Go to the USA with its history rooted in confederacy, slavery and prejudice and the racial divide is as wide as ever. Sport should be a great unifier – look at the numbers of Black US footballers of Basketball players – but their voices seem muted behind white owners, white broadcasters and white corporate sponsorships.

Which is why this monologue by West Indian legend Michael Holding on camera yesterday was so powerful.  Holding speaks with real passion describing the “dehumanisation of the black race” in history and society’s failure to address this. Listen to it all.

The fact that in 2020 we still are wearing badges promoting that Black Lives Matter should shame us all – because it says that we have done so little. In 1984 I was at the Everton v Watford FA Cup final. John Barnes, so abused, so talented, receives the ball early in the game. A vitriolic Everton voice behind me screams “Kill that fucking black bastard.” We have gone precisely nowhere.

So we have to do more.

As a society change comes through education, health and housing. It does not come through massive police and surveillance funding. It does not come from a criminal justice system which fails to treat everyone equally or to offer the same protections under the law to every citizen. We are safer united than divided.

It is hard to contemplate all the ways the world needs to change. But we cannot simply say that the goal is admirable. Change needs an agenda. It has to be political. Change is hard. Change we must.