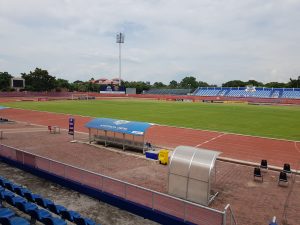 Football is back. And with the return of football comes all the usual drama, frustration, excitement and ennui. This strange game had it all.

In the end it was the Dasakorn show; the 36-year-old Thai national team veteran was making his Ayutthaya debut and scored twice, including the injury time winner. More on that later.

This was the first game of the restarted 2020 (now 2020/2021) season and the 5th game of the League schedule. Chiang Mai well-placed with seven points from their previous 4 games and Ayutthaya bottom of the table with one point.

As the clubs entered a lengthy lockdown Ayutthaya basically released most of their squad; saving salary costs before needing to rebuild the squad for the restart of the season. Chiang Mai, meanwhile, have made far fewer changes though the loss, through long-term injury, of Verdini leaves the defense looking fragile.

There were temperature checks on entering the stadium but after that common sense took over. The use of a red check in/out stamp with apparently indelible red ink seemed a little excessive. Fans sat where they wanted. Few wore masks. And there was plenty of shouting.

The early 5.45pm kick off meant conditions were hot on a good-looking playing surface. Without Verdini Chiang Mai played a back three of Meedech, Eakkaluk and Athibordee, who was making his debut. Atthawit and Nattachai started up front with Ryo in the slot behind the front two.

Before anyone asks Chiang Mai’s starting line-up included eight loan players from Bangkok Glass. It is not an ideal situation and it will be hard to keep successful players if BG needs them in the second half of the season – but it is what it is. Unless anyone has very deep pockets and wants to own a football team then we are for now like the little brother than gets the hand-me-downs.

A quiet start saw five minutes of keep-ball – before the ball was passed back to Korraphat just outside his penalty area – he takes a look and a second touch – by when Byung-soo Yoo, the ex-Customs United Korean, has chased down the goalkeeper, blocked his clearance and nodded the ball into the goal. 1-0 Ayutthaya. Awful goal to concede.

Chiang Mai’s response was almost immediate. Ryo clear on the left side cuts inside and his low pass is swept home left-footed by Atthawit into the corner from twelve yards. 1-1.

Oddly after that fast start there were no more goals in the first half; at times there was more action in the aerobics group behind the southerly goal. It was all a bit ponderous from Chiang Mai and Ayutthaya were happy to wait for opportunities to break forward.

Ayutthaya’s two best chances saw Yoo’s header drift narrowly wide from a Dasakorn freekick and Dasakorn blast wide from 20 yards. The better chances fell to Chiang Mai with Kongnathichai’s powerful header narrowly going over from a terrific Samroeng cross; Samroeng again cutting inside to shoot straight at the goalkeeper from 22 yards and Tassanapong drifting through a parting defense only to be blocked by goalkeeper Tatpicha on his six-yard line. The chance of the half fell to Nattachai who volleyed over an open goal after being set up by Kongnathichai. Just before half time Ryo and Kongnathichai were through on goal but a combination of strong defending from Narongchai and an element of confusion ensured the teams were tied at half time.

There were no corners in the first half – an indication that there were long periods where not a lot happened.

Five minutes into the second half and a touch of Ryo samba saw Chiang Mai take the lead. Picking up the ball wide left he cut inside and curled the ball with his right foot inside Tatpicha’s far post. A quality goal. 2-1 Chiang Mai. Enough to inspire a coming together of players from both sides a few minutes later with Ryo again at the heart of the action. No cards as the referee displayed some common sense.

Ryo was again looking lively – a header straight at Tatpicha in goal and then flicking an effort just wide after a well worked break with Bamba, who was making his Chiang Mai debut as substitute for the disappointing Nattachai.

Suddenly it was 2-2. A deep floated cross from Pichit on the right was met by Yoo under pressure from both Eakkaluk and Athibordee. The Korean forward calmly headed down for the unmarked Dasakorn to sweep his half volley home. A fine finish though truly poor defending. 2-2.

More handbags after 73 minutes when one of the Ayutthaya players fell like a Canadian pine suggesting Bamba was somehow involved. Again, the referee did not produce a card.

Dasakorn was then booked for a studs up challenge on (I think) Athibordee who was himself then booked for pulling the Ayutthaya left winger back with an arm around his neck.

Chiang Mai had two good chances to wrap the game up. Tatpicha saving a close-range header with his feet and then Ryo trying to repeat his earlier goal this time pushing his shot wide of the far post.

Into five minutes of injury and time-wasting time. Ayutthaya get a very questionable free kick 22 yards out in front of goal. Dasakorn, always a dead-ball specialist, kisses the ball, tees it up and curls it over the wall unstoppably past Korraphat. 3-2 Ayutthaya. The old pro then collapses in the centre circle, probably exhausted after his celebratory run and swan dive, to waste a little more time and is stretchered off only to return a minute later.

Some more theatricals from Byung-soo Yoo were enough for Ayutthaya to see out the game.

Credit to the home side. It is a new squad – with a number of veteran players – but they looked hungry and united. Chiang Mai, occasionally impressed, mainly around Ryo who is a quality player. But up front the squad looks lightweight and at the back the team had three players all much too similar with limited pace and no height and often staying too deep; Verdini’s leadership at the back was missing.

So we head back to Chiang Mai for the next game at home to Navy. We have played two and won two at the Municipal Stadium this season. It is our away form of one draw and two defeats that needs to be turned around. Early days still.