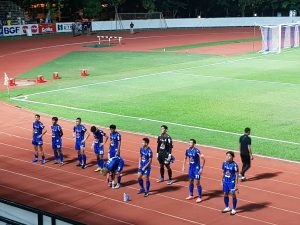 Competitive football came back to Chiang Mai’s municipal stadium this evening along with the visit of one of the oldest names in Thai football.

The Navy had come to town. After starting the season with three wins and a draw this was their first game after the restart following last week’s postponement with Khon Kaen United.

Chiang Mai made one player change from Saturday’s defeat at Ayutthaya with Bamba starting in place of Tassanapong.

At the back all three players changed position with Athibordee moving to the centre of three and Meedech to the right and Eakkaluk to the left. It looked a more competent defensive unit as a result. Atthawit played deeper tonight behind Ryo and Nattachai.

Chiang Mai had the better of the opening minutes without posing much threat until Ryo scooped a close-range shot over the bar after good work from Samroeng down the right.

That early pressure eventually told after 20 minutes when Apisit in space down the left side sent in a low cross that Ryo intelligently let run allowing Nattachai to sweep the ball high inside goalkeeper Bunyakiat’s right post.

Chiang Mai looked much the busier side at this stage. Kongnathichai’s header was straight at the keeper; Ryo’s mazy run ended as he pushed the ball too far ahead allowing Bunyakait to gratefully pounce; Apisit’s cross was punched hopefully clear by the Navy keeper.

Once again Chiang Mai had failed to convert the chances they created. Leading 1-0 at half time the home side should have been in control.

The warning signs for Chiang Mai arrived early in the second half as Erivelto banged a freekick against Korraphut’s crossbar; he was to do better a few minutes later when a static Chiang Mai defense allowed Neto Santos to tee up the opportunity for Erivelto to bury the ball low to Korraphut’s right from eighteen yards. 1-1.

At the other end a mazy Ryo run was stopped by Nawapol, and a second effort saw Ryo drag the ball onto his left foot but pull the shot narrowly wide.

Navy should have taken the lead in the 57th minutes. A Navy corner was partially cleared to Erivelto whose mishit shot dribbled through defenders to the feet of Neto Santos unmarked and alone six yards from goal – while Chiang Mai and the crowd were baying for offside Neto had time to turn and thump a shot against the crossbar. He was onside as Apisit was slow to leave the near post after the corner.

Lying deep Navy appeared to have settled for a draw. Chiang Mai dominated possession and a Ryo shot, after an Eakkaluk miscue, stung the Navy keeper’s hands. Atthawit’s optimistic long-range free kick was better suited to an oval ball. Yet there was little urgency and few ideas from the home side – happy to knock square or crossfield passes while probing for an opening – a tactic that looks less than penetrating when that measured build up ends in a long-range effort wildly off target from the defender, Meedech.

Chiang Mai’s coach Amnaj Kaewkiew waited until the 76th minute before bringing on an additional forward with Nattapoom replacing Kongnathichai. As on Saturday the substitute made chances to win the game for Chiang Mai; firstly hitting the crossbar and then with the last kick of the game pulling a close-range effort wide of the far post when it would have been easier to hit the target.

In the end Navy will have been happier to have restarted their season and to come away with a point. Chiang Mai have taken just one point from their two-game restart; both games that they made more than enough chances to win. A win at distant Ranong on Saturday is needed if Chiang Mai are to stay in touch with the Championship’s leading teams.