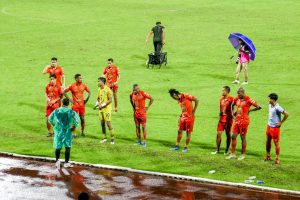 On a ferociously wet, and utterly miserable evening, Chiang Mai put in a brave and committed performance to become the first away team to win at Ranong since the season restart.

Chiang Mai made two changes from their midweek draw with Navy. Jaturong starting in goal for Korraphut after the sad passing of his mother last week. Nattaphoom got his first start of the last three games replacing the more defensive Kongnathichai.

Jaturong joined Chiang Mai at the start of the year from Samut Sakhorn FC.

Ranong’s one change after their midweek home win against Khon Kaen was to replace Kittiwut with Noppadon.

Nattaphoom’s inclusion meant Chiang Mai had a quick, mobile front three with Ryo in the centre and Nattachai the other side. This was to be significant.

Up front Ranong relied on the Nigerian Julius Ononiwu and the Brazilian Bernardo; both have spent some years in Thailand’s lower leagues.

The pitch was saturated before the game. By half-time it was a quagmire after some torrential rain. It is hard to describe how difficult it was to play in those conditions and just how physically exhausting it was.

The first twenty minutes were an even contest.

It was Bernardo who threatened first with a low ball across the area from the goal line that eluded Ononiwu.

Ranong goalkeeper, and complainer in chief, Wichaya, could not hold Samroeng’s shot but neither Ryo or Nattaphoom could dig the rebound out of the goalmouth mud and the ball was cleared for a corner.

Nattachai’s fizzed cross from the left was cut out by the stretching Mardochee before it reached Ryo at the back post. A similar move would lead to Chiang Mai’s second goal.

Successive Ranong corners from either side flashed across the Chiang Mai goal eluding everyone.

Then suddenly Chiang Mai took the lead – the ball broke for Ryo forty yards from goal; he held off the defense before calming sliding the ball passed Wichaya from eight yards. A terrific solo effort on any pitch but on this one it was an outstanding finish. 1-0 Chiang Mai.

Minutes later it might have been two. Jaturong pawed away a Ranong corner and the ball broke upfield for Ryo and Athibordee in a two on one with the Ranong goalkeeper. Ryo drew his defender and released Athibordee who with a defender’s sense of uncertainty in front of goal delayed until the defense had re-gathered.

At this stage the rain was at its worst – with strong winds as well. A M-150 advertising hoarding literally was blown away from and over the small stand on the far side of the pitch. Something I have not seen before! 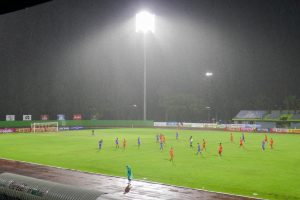 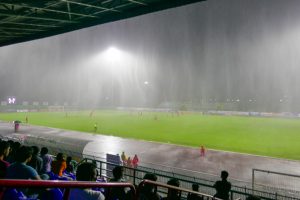 With almost 40 minutes gone a cross from the left should have been cleared by Mardochee. The ball instead got stuck between his boots and the mud. In this tangle Ryo was alert enough to tap in from almost no distance. 2-0 Chiang Mai.

Ranong were by no means out of the contest; Ononiwu’s free kick went wide; another turn saw him shoot straight at Jaturung before, with his best chance, he hit the crossbar picking up the rebound after a spectacular sliding block on Bernardo.

Half time and Chiang Mai led 2-0. The team had adapted well to the conditions. The usual short passing and probing game had given way to some common sense defending where one touch and out of play was to be applauded and long balls swept forward for the three forwards to chase down. It worked well.

Ranong’s two half time substitutes meant a more offensive line-up. Though Ryo, Nattachai and Nattaphoom between them might have sealed the game with a third goal as they broke forward in the 50th minute.

The big Nigerian, Ononiwu, was Ranong’s main threat shooting over from six yards a minute later.

By this time Chiang Mai had moved to a back four with Apisit Sorada moving to left back. This did concede some territory in midfield but football was almost unplayable across the middle of the pitch and the only route to attack was long balls from deep or wide.

Two poor Ranong freekicks were easily dealt with by Chiang Mai from good positions in the 60th and 62nd minutes. Overall Ranong’s set pieces, corners and freekicks, were ineffective.

Into the final quarter and it was time to add a defender and move to a back five. Dennis Nieblas making his debut as replacement for the excellent Ryo.

Siwakorn also came on for Atthawit who had worked tirelessly through the midfield swamp.

The back five stood firm until failing to clear a corner in the 83rd minute – Bernardo turned and shot from the edge of the area – his effort was blocked by Apisit but fell kindly for Ononiwu to slot home from six yards. 1-2.

One last Ranong attack saw Jaturong flying to push away a cross from the Ranong left – but Chiang Mai were able to see out the game leaving Ranong keeper Wichaya to run 40 yards to harangue the referee after the final whistle.

These were truly awful conditions; conditions that Ranong should have been much more familiar with. But Chiang Mai adapted well and their commitment was faultless. A special mention is needed here for Athibordee, Eakkaluk and Meedech who were each outstanding at the back. Bamba tireless in midfield; and a front three that had pace and mobility. Great changes from coach Amnaj Kaewkiew and it will be a happy team that makes the long journey home.

Finally – I can only assume that someone in the car park took a dislike to the Chiang Mai number plates on my car. Karma will get you whoever and wherever you are. 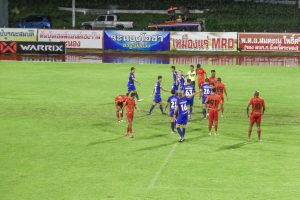 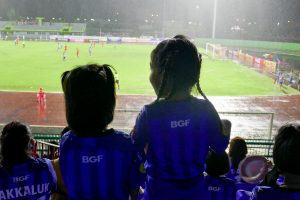