Home→asia→Ranong – an away trip turned sour 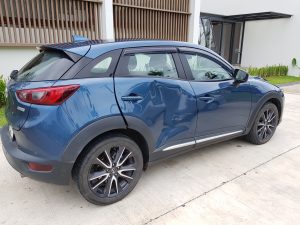 I had already been to Ranong back in March 2020 for the scheduled 14 March away visit of Chiang Mai FC. The Covid outbreak meant that the match was cancelled but the flights, car hire and hotel were already booked so it seemed like the best option was to travel there for the weekend. I flew from Chiang Mai to Ranong via Bangkok. Stayed for three nights. Tai flew down from Bangkok for a night so we were able to explore.

I liked the town; a mix of cultures and influences. Some pretty countryside; hot springs (ok not exactly a Japanese onsen but still fun) and a few fun places to eat in town or by the seafront.

So returning in September for the rescheduled match seemed like a good idea.

I messaged the club to find out about away tickets in the so-called new normal:

Hello Ranong United – can you let me know the arrangements for away fans coming from Chiang Mai for the match on 19 Sept. I would hate to drive all the way from CM to Ranong and then be turned away.
All help much appreciated.
Thanks and have a great season.
Robert

The response was simple : Have tickets for away fans

So I drove! Part of a two week road trip (with a one night return to Chiang Mai) that would take me to five football matches and to drive further south in Thailand than I had been before.

The drive from Bangkok to Ranong is about 9 hours – I stopped overnight in very wet and very quiet Thung Wua Laen Beach and set off to Ranong on Saturday morning. I had never driven in rain that bad. It eased, as it was always likely to, but what a storm.

At the Ranong Province Stadium the groundstaff were pumping water from the pitch but were certain that the match would go ahead.

So I went off to the hotel; back at the Sook hotel; then had a walk around town and admired the murals of one of Ranong’s old tin mines in a local coffee shop and hostel.

And so to the stadium for a 7pm kick-off. Thinking that away fans would likely be on the uncovered side of the ground I parked in the very large car park on the east side of the stadium by the small stand. When I arrived I parked next to the only other car there – which appeared to belong to a brave lady jogger – it was still raining and quite unpleasant.

I bought a ticket and in fact the Chiang Mai supporters were in the main stand at the very southern end of the stand but at least we were under a roof.

The match report is here.

After the final whistle a few of the fans were talking then I walked past the Chiang Mai dressing room – outside of which Khun Atthawit was enduring (no one can enjoy this) an ice bath. It was Natthaphoom’s turn soon after. We had a short chat about the game and their own long haul back home – a bus ride to Bangkok overnight and then a morning flight to Chiang Mai. Who said a footballer’s life is glamourous?

So I walked back to my car – and immediately it was clear that the rear offside door has been hit hard. The car park is huge and there were few if any cars there. Despite the rain there was also light from the stadium lights which were still on and overhead lights on the road around the car park.

Who would do this; how and why?

With some translation help from my wife, Tai (I gave the insurance people her name and number) we got their assessor to come and review the damage. It was still raining heavily.

The assessor was efficient. His recommendatione was to not make a report to the police. Just accept that we would need to pay the first Baht1,000 of the repair as we did not know the third party that caused the damage.

The following morning I sent a message to the “Ranong United” messenger account:

Firstly I sent two pictures of the damage: then:

Me: I have to assume that one of your fans did not like the result and saw my Chiang Mai number plates in the stadium car park last night.
Really disappointing.
Insurance will deal with it but football is just a game. This is inexcusable.

Ranong United: Now, this has never happened before. I want to know why you think football fans do?

Me: Find another likely explanation. The car was parked in a car park by the stadium. The damage occurred during or at the end of the game where i was one of the last to leave.

No note. No insurance details. Only people likely to be there in last night’s weather were football fans.

If you have a better explanation do share it. Insurance will take care of it but it is not something I expect at any ground in thailand.

Ranong United: I want you are telephone number.

So I gave him my number and while I was driving across to Surat Thani I get a phone call from an angry sounding Thai male. He says they have cctv video of the incident but his English is as bad as my Thai. I told him that I would get my wife to call him and he could explain everything to her.

Now this is where it starts to get unpleasant.

Tai calls him – and he is already saying that I have damaged the reputation of Ranong United. That I posted on the Ranong facebook page. I did not – I sent a private note to Ranong United on messenger. I also posted pictures of the damage on my personal facebook page. His tone is angry. He is not listening just talking.

It seems that he is the Chairman of the club – interesting that he manages their messenger account. He told Tai that he is also senior in the local amphur. His name: Waranon Kloensin

Here is the video footage from the CCTV. This was sent to Tai by the club. The club also send two picture of the three people that they say were in the pick-up truck. One of the pictures shows them leaving the stadium after the game – clearly Ranong supporters. The time stamp on the CCTV on the incident is 20.52pm.

You decide. The driver reverses in a very deliberate manner into my car. He does not even bother to get out and check the damage that has been caused. And then he drives forward – leaving on exactly the same path as he had just reversed – suggesting that reversing in the first place was never necessary – it almost certainly was not given the space in the car park.

So if it was not deliberate – then what, alcohol?

One question that comes up is why did the Chairman of the club send us the CCTV video. I think his reasoning was clear. As far as he is concerned this event is nothing to do with the club. Here; I have done what I can; this is the video; any issue that you have is between you and the driver and people in the pick-up truck. The club will be of no further help or support.

The message was as loud as it was clear.

A few bits of good news;

The car is still driveable.
Only the rear door was damaged.
Amazingly the window did not shatter – although the door is jammed locked.

So exactly who is it that is damaging the reputation of Ranong United? It is not me despite the club’s best attempts at victim blaming. Would they have made the same response to a Thai supporter? I suspect the answer is widely known.

Khun Waranon’s conversations with Tai were difficult. He was clear that the club was in no way responsible – no one had suggested that they were. Yet, given the small number of supporters at Ranong and that in this “new-normal” environment all home supporters would be season ticket holders or will have registered with the club, I can only speculate whether or not the club knows who they are. The Chairman, and I appreciate this, share the CCTV video which has been forwarded to my insurance company. His reasons for doing so appear to be more about damage control for the club.

So here is some PR advice for the Chairman and the people that run Ranong United. The message that you should have sent reads as follows:

“We are really sorry this happened to you at our stadium. This is not the behavior that we would expect, or tolerate, from our supporters. We realise that this was a long trip for you and that you have been caused a great deal of inconvenience and some expenses. We hope you have a safe trip back to Chiang Mai and that you will not be put off returning to Ranong in the future.”

A final message for Ranong United – threats and an utter lack of empathy  are unworthy of your club and its supporters.