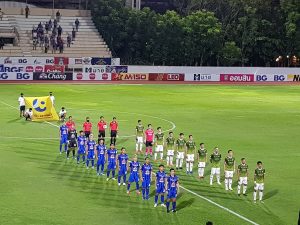 Chainat arrived unbeaten since the season restart; and a single point ahead of Chiang Mai. Their only defeat this season was back in February, coincidentally at Chiang Mai United.

Making three changes to the side that drew last week with Udon Thani Chainat gave starts to Chatchai, Netiphong (who played at Chiang Mai FC for part of last season) and Suksan.

The highlight from CMFC TV are here:

A quiet start sprung into life after seven minutes when Murakami (not the author) and Netiphong exchanged passes in their own area unaware it seemed of Kongnathichai who closed down Murakami a few yards in front of his goal – the defender trying to set up a left foot clearance miscued and the ball dribbled into the goal off the Thai forward. Woeful defending. 1-0 Chiang Mai.

A minute later and the comedy of errors was compounded. A seventy-yard lob forward from Apisit inside his own half was aimed towards Ryo. The ball was hit long and the advancing goalkeeper, Kittipun, badly misjudged the bounce, flailing at air, leaving Ryo to run around the keeper and tap in for a 2-0 lead.

Credit to the Chiang Mai strikers for chasing down what should have been lost causes. But it was Keystone Cops defending.

Chainat were to enjoy plenty of possession in the minutes after the second goal – but without any penetration until a great reverse pass from Harrison set up Sukson in the penalty area but caught between a shot or a cross he pulled the ball so wide that it went for a throw-in.

Meanwhile Nattachai had two glorious first half chances with a header into the ground and over the bar from an excellent Atthawit cross and then breaking late in the half for a one on one with Chainat goalkeeper Kittipun who saved well with his feet.

Sumeth, making his Chiang Mai FC debut, came on as substitute for the injured Apisit and was booked within a minute of coming on – maybe record timing for a debutant.

38 minutes gone and it was 3-0 to Chiang Mai. Ryo controlled a clearance in his own half close to the centre circle. He spread the ball wide to Kongnathichai and continued his run. The two forwards were surrounded by five defenders and still had the goalkeeper to beat. Kongnathichai’s pass was slightly behind Ryo requiring the forward to adjust his feet still with his back to goal. He turned, looked to go right before switching the ball onto his left foot and curling it inside Kittipun’s far post. A very classy finish.

Chainat made the worst possible start as the second half got underway after conceding a free kick 40 yards from goal. Atthawit floated the free kick to the unmarked Ryo at the back post who shinned the ball back across goal for Kongnathichai to beat his teammate, Athibordee, to the ball and score for a 4-0 lead.

The goal of the game, and it would have graced any game, came after 60 minutes. Eakkaluk advanced with purpose out of his own defense. His angled pass was into space for Ryo to run onto down the left side. Ryo takes a touch, looks up, sees Nattachai steaming into the penalty area on the right, and with the outside of his right foot Ryo curled the ball away from the Chainat ‘keeper perfectly into the path of the Chiang Mai striker who swept the ball home passed Kittipun. A fabulous counter-attacking goal.

Chainat offered little in return. Rafael, who had a quiet game, flattened Korraphut as they both challenged for a long ball out of the Chainat defense.

Nettiphong was sent off for a second yellow card after a poor challenge on the advancing Meedech.

At the other end Samroeng’s deep cross almost deceived goalkeeper Kittipun and bounced off the crossbar.

There was just time for Chainat substitute Siripong to have a token shot comfortably saved by Korraphat.

This was a fine and convincing win. Some of Chiang Mai’s football was a pleasure to watch. Fast confident and fluid.

Bamba was excellent again including some tireless defensive work in support of the back three where Meedech, Athibordee and Eakkaluk were again exemplary – defending well but also distributing effectively from the back.

Ryo was again at the heart of the action, scoring twice and setting up two more. He plays with a real love of the game.

It is hard to find a weakness in what is quickly becoming a very good football team. Maybe a better goal return from Nattachai and from the midfield would be welcome; but that is looking for minor issues.

League leaders Nongbua Pitchaya and Chiang Mai United both have to come to Chiang Mai FC between now and mid-December. If this squad stays together Chiang Mai FC will be in the title race at the end of the season.