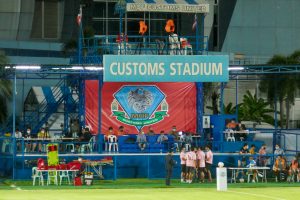 Chiang Mai FC made it three successive wins with a 3-0 victory at MOF Customs United in Bangkok on Saturday night. A result that sounds more comfortable than it was for the first eighty minutes.

There really are no easy games in this league. Sometimes you have to dig deep for a win; be strong for ninety minutes; ride a little luck; take your chances and make some good decisions.

Chiang Mai made two changes from last weekend. Sadney made his first appearance since the season restart, replacing Kongnathichai, and Sumeth started for the (presumably injured) Apisit Sorada.

Customs also made two changes from the side that lost at Khon Kaen United with Nattapong replacing Kenzo Namba and Wason in for Chakrit.

Built around the ex-Kasetsart manager and a number of ex-Kasetsart veterans Customs edged the first half before conceding two late goals while they were chasing the game after Sadney’s glorious second-half opener for Chiang Mai.

The opening exchanges belonged to the home team with Ganu Adisak and the Brazilian Deyvison both prominent. Deyvison turning Adisak’s fine low cross wide in the third minute when he should have done better, and then nearly capitalizing on Wanmai’s lobbed ball behind the Chiang Mai defense with Korraphat making the block.

Wanmai brought the best out of Korraphat after nine minutes when the goalkeeper reacted well to turn the ex-Chiang Mai defender’s stinging drive away for a corner.

Chiang Mai at this stage were looking a pale shadow of last week’s fluid, pacey team. But slowly they came into the game; Nattachai’s long range effort was deflected for a corner and Eakkaluk’s optimistic overhead was wide of the target.

Nattachai, set up by Ryo, pulled his twelve-yard shot narrowly wide and Samroeng’s deep cross was just too high for Sadney.

Wanmai was in the action again when he challenged Ryo by the Customs penalty spot for a long ball in from the left. Wanmai’s flailing elbow appearing to catch the Chiang Mai forward. The referee consulted the linesman and both decided they had seen no wrong-doing. I suspect the Thai League may have a look at the video.

Sumeth, making his full debut after coming on as substitute last week, had a tough time down the left side where the experienced, and significantly larger, Adisak was bullying him and was a constant threat when Customs broke forward. Adisak beating both Sumeth and Meedech to shoot from close range  with Korraphat saving well with his feet.

Into injury time at the end of the first half and Sadney knocked the ball down to the onrushing Ryo in the Customs penalty area; Ryo’s first time shot produced an excellent low save by Nutchanon to his right; the ball rebounded, and Ryo and the goalkeeper both lunged for the loose ball. The home goalkeeper’s response was as poor as his save was excellent. His team unfortunately also doing their best to persuade the referee that Ryo’s challenge was unfair. The goalkeeper was still fuming when the referee blew to end a scoreless first half; the excellent Chiang Mai fans made sure the home goalkeeper knew what they thought.

Another Adisak free kick was the earliest Customs threat of the second half as Korraphat flapped at the cross.

Then out of nothing Sadney produced a goal of the season contender. Meedech played a pass forward from just inside the Customs half. With his back to goal Sadney takes a left foot touch, pirouettes and smashes the ball into the goalkeeper’s top left corner from 25 yards. Just what the game needed.

Sadney had a quiet first half – plenty of running but much of it into space that Ryo usually occupies. Playing a little deeper in the second half he was much more effective.

Chiang Mai were making the running now; Ryo was flattened as his pass set up Nattaphoom, on as substitute for Nattachai, his shot pulled wide of the right upright. Another Nattaphoom opportunity saw him make space for a left foot shot but straight at the goalkeeper.

Sadney then set Ryo free; he beat the goalkeeper but not the offside flag. From 60 yards away there was a loud protest!

Deyvison’s studs-showing lunge at Korraphat went unpunished though maybe it unsettled the goalkeeper who again looked uncertain on a cross pushing it clear for Customs substitute Kritapat to curl his shot inches past the far post.

Kenzo’s diving header from a Suradet cross was straight at Korraphat.

83 minutes gone and Meedech was booked for a late tackle. A super headed clearance by Nieblas, on for Samroeng as Chiang Mai moved to effectively a back five, to clear Wanmai’s free kick and Chiang Mai broke quickly downfield, Ryo down the centre passed out to Sadney on the left who at pace held off Kanok and calmly stroked the ball home with his left foot. 2-0 Chiang Mai.

The Sadney goal celebrations are a reminder of Roger Milla at his best!

At the other end Deyvilson scooped a shot onto the top of Korraphat’s crossbar as the game went into four minutes of injury time.

Three minutes into injury time wide left Ryo picks up the ball, he nutmegs Witthaya, then drifts past Chakrik, Kanu, Wanmai and Siwa before curling the ball with his right foot inside the left post. An outstanding solo goal. 3-0 Chiang Mai.

All that was left was for the referee to blow for full time and for Meedech to sprint 90 yards to the dressing rooms beyond the far goal while looking in some discomfort.

An excellent away win for Chiang Mai who were resilient at the back and, in the second half, irrepressible in attack. The slow start was a concern but Customs failed to take an early advantage while Korraphat made a number of important saves. The return of Sadney is yet another option up front for the Chiang Mai coach and the Namibian forward after an uncertain start had an outstanding second half and scored two terrific goals.

There is a break in the League next week; and on 18 October Nongbua Pitchaya are the visitors for a top of the table game that deserves as big a crowd as the new rules will allow.