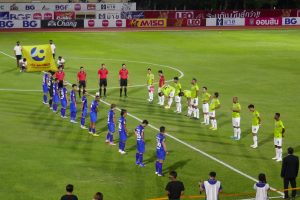 Late last year paleontologists announced that they had identified a new species of carnivorous dinosaur that once roamed the land that is now Nong Bua Lamphu province.

The new species is called Vayuraptor nongbualamphuensis, named after the province where the bone fragments were found and the Sanskrit word for wind deity, reflecting the dinosaur’s perceived speed.

On Sunday evening in Chiang Mai Nongbua province’s football team made a meal of the tigers of Chiang Mai with an outstanding display of counter-attacking football.

Nongbua Pitchaya arrived in Chiang Mai unbeaten this season and left two points clear at the top of the table after a thumping win. Their investment in new players and in a new stadium mirrors the previous success of Buriram in potentially making one of Thailand’s more remote provinces a Thai footballing stronghold for years to come.

On a lovely mild evening, perfect for football, Chiang Mai made two changes to the team that won well at Customs two weeks ago with Pratya replacing Sumeth and Kongnateechai in for Nattachai.

Nongbua’s last outing was a struggling 1-0 home win against Uthai Thani. Sakdarin replacing Chatchai was their only change.

A quiet opening came to life after seven minutes. Namba was penalized for a trip; at the center of a scrum of players Samroeng and Nongbua’s tall Brazilian striker, Chulapa, were taken aside for a telling off by the referee.

All of this provided some distraction as Chiang Mai failed to defend the free kick. 22 yards out in front of goal Lursan, Sakdorin and Valdo lined up to take the kick. Sakdorin hit it hard and low through the wall; Korraphat was unfortunate, the ball bouncing in front of his dive low to his right; the ball rebounding off the keeper for the Madagascan international Njiva to react before Yuki Bamba to fire home the opening goal. 1-0 Nongbua.

There were no more goals in the first half though Nongbua were well in control. The high press from their three foreign forwards constantly creating difficulties for Chiang Mai to play out from the back. When Chiang Mai did move the ball forward the attacks broke down in the final third and Jamsuwan, in goal for Nongbua, had a very quiet evening.

Samroeng shot high over the bar from distance after a Sadney run.

While a break from Njiva ended in a theatrical tumble after his pace took him comfortably past Meedech.

Atthawit was booked for a late challenge on Lursan, a player who will annoy both opposition teams and supporters this season. At one stage he sprinted 30 yards to protest an innocuous challenge from Sadney on the Nongbua goalkeeper.

A flat low cross from Njiva just evaded Jedsadakorn; a similar cross from the other side was completely misjudged by Tiago Chulapa in front of goal as he headed well wide.

At the other end, Pratya took down a long ball from the far side, cut inside his defender and sliced his drive well wide. It was that kind of night for the home side; rare half-chances that came to nothing.

0-1 at half time and Chiang Mai were still in the game, but after a very subdued first half they would need a dramatic second half improvement.

Instead three minutes into the second half as Chiang Mai pressed forward in numbers a misplaced Atthawit backheel, on the edge of the opposition penalty area, set Nongbua off on a rapid counter attack, Chulapa holding up his pass to release Njiva on his left and the forward drilled home his second goal with a fine finish. 2-0 Nongbua.

Chiang Mai replaced the ineffective Kongneetchai with Nattaphoom; it would make little difference.

Nongbua’s third came after sixty minutes again down the left side; this time Korraphat was beaten at his near post the ball rebounding off the upright for Chulapa to tap home the rebound. 3-0 Nongbua.

The fourth quickly followed. Valdo who was enjoying the freedom of Chiang Mai on the right side, eased past Eakkaluk and his hard low cross was met by Njiva at the far post for his hattrick. 4-0 Nongbua.

Nattachai replaced a less-than-happy Ryo and his lay-off on the edge of the box for Sadney was Chiang Mai’s best chance of the second half; the Namibian forward curling a left foot shot narrowly over.

At the other end Chulapa headed an excellent Sakdarin cross straight at Korraphat.
Into the last fifteen minutes and there was a straight red card for Pratcha for a dangerous challenge on Wichitchai which looked likely to leave stud marks around the ribcage. It was not intentional so much as tired and careless. The immediate red from the referee kept the situation under control and there were no complaints from the Chiang Mai players.

Warut replaced Atthawit in Chiang Mai’s final substitution. Nongbua also made a series of substitutions but tellingly left their three forwards to play out the game.

A fifth goal was no surprise. It came from a fine run down the right by Valdo, who pulled the ball back onto his left foot and crossed for Njiva, who else, to take one touch and then beat Korraphat with another classy finish. 5-0 Nongbua and four quality goals for Njiva.

Korraphat saved any further blushes with a strong save one-on-one with Chulapa who had drifted past a limp challenge from Samroeng.

There was time for one final consolation effort from Sadney, heading Bamba’s free kick over the crossbar.

It is hard to know what, if anything, Chiang Mai can take from this game. They were thoroughly outplayed. The match is probably best consigned to the footballing history bin; quickly forgotten like any other bad day at the office, with the focus now on coming back with energy, pace and goals for next weekend’s away trip to Phrae.

Nongbua looked very good. Njiva and Valdo were outstanding. Chulapa bossed both Eakkaluk and Athibordee. Lursan, Sakdarin and Jedsadakorn providing support from midfield and at the back, through barely raising a sweat, their three defenders did simple things very effectively. If they keep their squad fit, and their three foreign forwards happy, they should win this league.

One rather tame defeat should not be enough to write off Chiang Mai’s challenge if not for the title, for the other two promotion places.