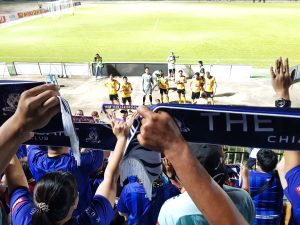 An outstanding away win for Chiang Mai FC was enjoyed by some 200 travelling supporters who were in fine voice for all ninety minutes at perhaps the most remote stadium in the Championship.

There is a rumour that Phrae coach Khun Arnon borrowed W.Smith’s neuralyzer after last night’s game holding it up in the dressing room to encourage his team to believe that their first home loss in four years never happened.

Smith himself will want to forget his 46th minute penalty, saved by Korraphat. A save that changed the game.

Local supporters have not seen their team beaten at home for 4 years. Welcome to the Thai Championship, where every match is that little bit harder. That said, Phrae were unbeaten at home this season with three wins and two draws.

Phrae lined up in their attractive indigo blue home shirts which cleverly reflect the colours worn widely throughout Phrae. Chiang Mai were in their yellow away shirts.

Opening brightly Nattachai shot wide from 25 yards and a pacey run down the left by Sumeth saw his cross flicked over the far post by Ryo. A Nattaphoom run ended as he ran into, and was fouled by, a wall of three defenders; Atthawit’s inswinging free kick was just a little too close to goalkeeper and captain, Nantapol.

The momentum started to change; Atthawit lost the ball in midfield and Wellington Smith’s audacious chip from over 30 yards was narrowly over the crossbar. A slip from Atthawit allowed Nonthaphut to shoot from distance – well seen and comfortably turned over the bar by Korraphat. A tame challenge from Eakkaluk allowed Phitchanon to run on goal but he was stopped by an outstanding chase and tackle from Nieblas.

At the other end a Phrae handball set up a freekick curled narrowly over the bar by Atthawit from 20 yards.

Phrae’s fourth corner in the 29th minute saw the opening goal as Arsan eased goalside of Eakkaluk for an unchallenged header inside the far post. 1-0 Phrae.

Chiang Mai’s response was driven by Ryo setting up Nattachai whose shot was pulled well wide; Adisorn was then booked for a trip on Ryo. At the other end an uncertain defensive header outside his penalty area from Korraphat fell to Smith who curled a long-range effort wide.

Into two minutes of injury time at the end of the first half. Smith was pulled down by a poor challenge from Korraphat as the big forward sprinted into the area. A clear penalty and a yellow card for the goalkeeper.

Smith took the penalty himself; but with an unnecessarily long run up he was either confused or exhausted as his tame penalty was saved by Korraphat low to his left – the goalkeeper doing very well to recover and claim the rebound. 2-0 down at half-time would likely have been game over. Instead Korraphat had provided the platform for Chiang Mai’s outstanding second half. A revival that few in the crowd realistically expected.

In the first minute of the second half Nattaphoom on the left curled his right-footed cross onto the head of Bamba; Nantapol making a reaction save with his left foot.

Korraphat then had to save well from Phitchanon’s shot after the Phrae forward beat Athibordee. Smith, set up by Adisorn, shot powerfully over the crossbar.

Then came Chiang Mai’s 60th minute equalizer – a Bamba free kick on the right – curled invitingly into the penalty area where Nieblas rose to head home. 1-1.

Kongnateechai replaced Nattaphoom and made an immediate contribution in a lovely flowing left-wing attack for Chiang Mai’s second goal. Ryo passing inside for Kongnateechai who released Sumeth (it was his best game for Chiang Mai to date) and his firm low cross was tapped in at the far post by Nattachai. 2-1 Chiang Mai.

Ponlawat was booked for a trip on Ryo who took his revenge in the 74th minute turning the substitute Nirun inside out; his right foot shot was saved by Nantapol’s stretching left leg but rebounded to Atthawit, 18 yards from goal, who drilled his low shot inside the far post. 3-1 Chiang Mai after three goals in fifteen minutes.

Meedech replaced Samoeng as Chiang Mai moved to a back four to keep out late pressure from Phrae. Korraphat shoveling away a near post flick from Carlos from a Phrae free kick and Bamba blocking substitute Sarawut’s shot from the second of three successive corners before the referee blew for time after the apparently mandatory four extra minutes.

It was a fine battling win that ended Phrae’s proud home record keeping Chiang Mai in fourth position in the League. My man of the match, Dennis Nieblas, for a towering performance in defence and a fine opening goal. Narrowly followed by Yuki Bamba.

The only concern is where was this team; the spirit and this quality last week against Nongbua? That is a question that is unlikely to be answered.