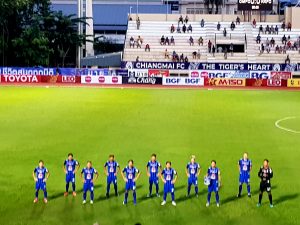 After last week’s fine away win at Phrae home fans were looking forward to a three-point performance against a Khon Kaen side in 15th place in League 2.

Instead Chiang Mai were predictable and plodding in a truly dismal, joyless game of football that ended in a 1-1 draw; leaving no one satisfied except perhaps officials at Bangkok Glass, who own both teams.

For Chiang Mai Kongnateechai started instead of Nattaphoom for no apparent reason given last week’s success. Khon Kaen made two replacements to the team that beat Kasetsart last week with Mustakim and Sarawut replacing the Iranian, Eiman Kaabi, and Jakkit.

There was a familiar face in goal for Khon Kaen with Narit returning to Chiang Mai where he finished last season.

Either there had been a huge storm over the Municipal Stadium or the pitch had been excessively watered. The north end of the stadium was especially heavy. This did not suit Chiang Mai’s pace and passing game; an advantage to the lumbering Khon Kaen defense,

Three offsides in the first ten minutes were a clear indication of how square was the Khon Kaen backline.
An Athibordee cross from the right that sailed hopelessly high and wide summed up the first twenty drab minutes.

Ryo then had his first run at the Khon Kaen defense; releasing Samroeng on the right who stepped inside and dragged his left foot shot into the side netting.

Khon Kaen’s first shot came in the 27th minute from Phommin and was optimistically wide from 30 yards; perhaps a sighter for what came later.

The Chiang Mai goal followed immediately and was the simplest of goals. Yuki Bamba in the centre circle played the ball forward to Ryo who slid his pass into Nattachai’s perfectly timed run behind Mustakim; the forward took one touch to steady himself and then calmly side-footed home low to Narit’s left from twelve yards.

Somprasong’s long range shot was an easy catch for Korraphat, while in a move similar to the goal, Ryo slid a pass into the Khon Kaen penalty area for Kongnateechai to run onto. Artur, Khon Kaen’s big Brazilian defender, did enough to stop the Chiang Mai forward. The crowd were more interested in the penalty claim than nearby Chiang Mai players.

Nattachai was then flattened on the right by Somprasong; the referee playing a good advantage though failing to then book the Khon Kaen forward for a poor challenge. The ball broke to Nieblas who in a rare foray across the half way line had galloped down the right wing. His deep cross reached Atthawit, but under pressure from Artur the ball bounced harmlessly wide.

The other highlight of the first half was a spectacular moonrise to the North East of the stadium and a few residual fireworks.

Khon Kaen’s equalizer came in the 60th minute. As Chiang Mai played keep-ball around the Khon Kaen penalty area, without really going anywhere, the ball broke forward to Phommin, unmistakable with his red-rinsed hair. Fully 70 yards from goal he strolled forward; Athibordee, Nieblas and Eakkaluk all peddled backwards; Atthawit who was the played closest to Phommin when he gained possession ambled back but never thought to make a challenge. Phommin looked up and had only one thing on his mind – he let fly from fully thirty yards and the ball curled and dipped away from the Korraphat’s dive into the goalkeeper’s top left corner. A terrific strike – but dismal, lazy defending.

And that was Khon Kaen’s only shot of the half. And to be honest it was the only significant action of the half. Ryo did put Nattachai in on goal again; but Artur was there to cover and the referee blew for Nattachai’s foul before the ball broke to Samroeng.

Narit did not have a save to make.

Both sides made a number of substitutions none of which looked likely to change the increasingly predictable result.

An indication of the lack of ambition from both teams – there was just one corner in the whole match – for Chiang Mai in the 71st minute, which Yuki Bamba curled out of play.

The final whistle was a relief.

Chiang Mai’s excellent supporters deserved something far better than this dispiriting performance. The good news – there is a long way to go and we really cannot play any worse……can we?