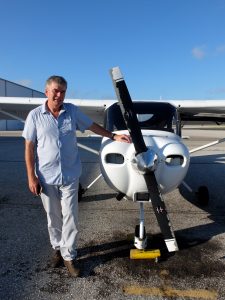 Five years ago today this happened – I make no excuse about re-posting it – as it was a day that has lived in my memory. It also makes me wish that I could fly again and gives me such sympathy for those across the aviation industry whose lives have been impacted by this pandemic.

The following was my diary entry for 2 November 2015.

I am a qualified pilot. That was quite a day!

The plan was that I would fly to Venice and we would start the test at about 11.30am – that was the plan. Plans change. Toby’s early morning must have cancelled so I get a message at 7.30 am asking if we can start at 9am at Sarasota.

Toby had asked that I plan a flight from Venice to Punta Gorda to Melbourne – the one in Florida – and back to Venice; departing Venice at 7.00pm local.

This changes things – the whole flight is a night flight. The legal fuel reserve is now 45 minutes. The waypoints that you could see en route in daylight are no longer visible. But airport beacons are. The restricted space east of Sebring is still restricted until midnight.

Would I do this flight on my own at this stage of my flying career. Honestly – no. Though legal. I would only fly this with another qualified private pilot sitting next to me. And I told Toby that.
Because for the oral exam the flight that you plan is solo; not dual. It is me, flying as a private pilot.

I have my flight route planned. But last night’s weather was not reliable and I need to still check the weather and phone the briefer for a forecast and details. Tai helped with breakfast while I did my homework.

Met with Toby at Dolphin aviation. Keith (my flight instructor) had to sign off on some of the FAA documents as well.

Then it was up the stairs to the conference room.

And I almost enjoyed it. Toby does the oral exam well. We talked a little to break the ice. And then he talked around scenarios rather than specific questions – mostly. There are some direct questions. But it did make it more of a conversation. Where if we both wanted we could go off at a tangent – and I could ask questions in return as well. Really just fleshing out some of the subjects that we talked about. It was more like an interview than a test. Looking back on it the time passed quickly and at no stage did I feel foolish or that I was out of my depth.

Now this got interesting. Downstairs with Keith and some of the Cirrus staff Toby asks me have you ever been to Tampa International No, I reply, Do you want to? He asks. He has to go there anyway for a short meet and greet. He could drive there later or I can take him there.
So let’s go to Tampa. Why is this interesting? Tampa is a class Bravo airfield like Miami or Orlando. I have never flown to a class B airfield. So I get a weather check. A print out of all the airfield data. There is nearly a page of radio frequencies! And a map to help me taxi around this huge airfield.

And off we go. A soft field take off – don’t stop and 10 degrees of flap. We dodged some low cloud. I asked for a lower altitude. Good call. Toby wanted to do some of the compulsory maneuvers before we get to Tampa. So we do some slow flight. Not bad. A power-off stall and some foggles (mock instrument) time.

My problem flying there was that it was windy and I was playing too much with the power to keep altitude. Just set your power and then use your pitch to control altitude. Much less work.
Tampa changed our frequency a few times; but that was OK. Just do as you are told. And we flew just to the east of Tampa for a 19L landing. Toby wanted a soft landing. It really was not a good landing.

We were landing into quite a strong head/cross wind and I should have left more power in. Instead because the Skycatcher is so light we got a bit of a floater. 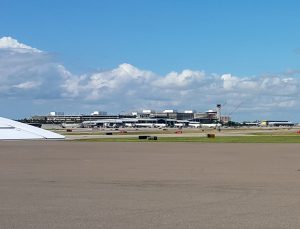 But we landed! A short taxi to the FBO at Landmark Aviation. Toby jumped out to do his thing. I got the FBO guys to add some fuel. As I did not know where we were going next or for how long. Common sense but probably wise.

And they guys were good – I was still upset at my landing and they were very reassuring – strong crosswind and a huge class B airfield…allowances must be made they reassured me.
Then for take off – rather than taxi the better part of two miles back down Echo to the end of Runway 19L Toby says – ask for a Sierra intersection departure and we can do our short field take off from there.

I called Tampa clearance – they just thought I was having a senior moment. I confirmed the request. You are sure? Clearance asked – you only have 1,800 feet. We are a Skycatcher – with this headwind we will be away in 600 feet.

Advised to be over McGill Air Force base no lower than 2,100 feet. This is strict. Off we went. I flew better now. Less playing with power. We did some steep turns – not bad at all. Then we did an engine failure – golf course available. Good. Then some turns around a point – a water tower in this case. Climbed back to altitude and headed back to Sarasota.

But the point here is that we did not fly the standard pattern. We had been given clearance to land so get the plane on the ground says Toby. Makes sense to me.

Parked the plane. Toby says congratulations and that he will see me inside and give me my temporary certificate.

I just sit for a while and digest all I have learned and how much more I still have to learn.

And as soon as I had my certificate I could legally fly a passenger. So back to the hotel. A quick shower and a change of shirt. Back to the airfield with Tai and we simply flew down the coast towards Venice – and then about 3 miles north of Venice we turned back North and headed back to Sarasota along the coastline for a runway 22 arrival and another short approach. Tai did not scream, panic or threaten to jump out and it was actually a very nice flight. 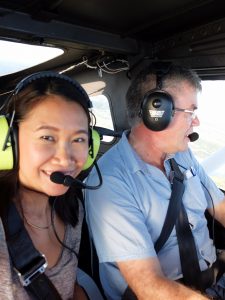 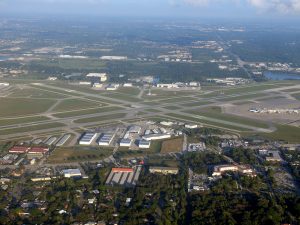 Toby was very generous with some of his advice – as my examiner he is not allow to teach or train me but we discussed a number of ways that I could or indeed should do when I fly fly that are different from how the flying schools teach.

For instance – he does not like full flap landings in single engine planes. If your engine fails you will fall like a stone and not make the airfield. Fly with your wings clean or with 10 degrees of flap….and you will make you landing with or without power.

All landings should be soft field landings.

What the schools teach about hypoxia and night flying make little sense. Altitude is your friend and at night you want as much height as you can to maximise the glide time in an engine failure.

Do not fly long pattern landings at controlled airfields. You have been cleared to land. So land the airplane. The closer you are to the airfield the better. Then you can land quickly if anything goes wrong.

Toby also made some interesting comments at the Cirrus students monthly social later in the evening.

He (I am sure he is right) thinks that all training should be scenario based. It should not be simply off we go to the east practice area to do some steep turns and a stall. Every flight should have a realistic plan and a purpose.

Power on stalls should be done while in a bank/turn – they should never be done in straight, level flight, as that is unlikely to ever be the case.

Lots of ideas – lots to think about – all good.

Toby was generous in his comments. But it feels good that all the hard work – and at times it was hard – were worthwhile. On the oral Toby wrote – “great oral – no issues – very knowledgeable applicant.”

It was a memorable day. Stressful at first. A truly genuine day of learning.