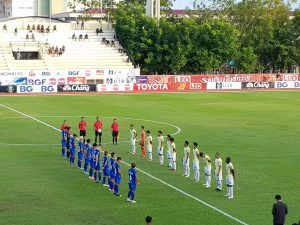 The round of 64 in the Chang FA Cup is an opportunity for smaller clubs, including many from the new Thai Regional League, to compete with the bigger teams of Leagues 1 and 2.
The good news for local fans was that Chiang Mai fielded a strong side with just four changes from their last league outing. Jaturong started in goal; the three other changes saw Sorada come in for Sumeth, Meedech for Eakkaluk and Siwakorn for Atthawit.

For Uttaradit Teerayut made his first start of the season in goal replacing Panupan who has played all seven league games. Four other changes from last week’s win over See Khwae City, brought in Vittaya, Chaipat, Anucha and Punnapob.

It was a lovely, calm evening; ideal for what became an entertaining cup tie clinched by Chiang Mai in the last five minutes of extra time as Uttaradit looked ever more weary.
The visitors looked lively at the start of the game; Patipat’s shot from a narrow angle was saved by the feet of Jaturong who then rather unconvincingly punched away an early corner. Punnapob’s run between Nieblas and Athibordee ended with a shot from twelve yards into the side-netting.

Meanwhile at the other end Vittaya was booked for a hack at Ryo; Bamba, released by Nattachai, shot powerfully wide from 18 yards; Nieblas met Bamba’s outswinging corner but headed inches wide and Bamba’s 25 yard free lick touched the wall and deflected for a corner.
With 27 minutes gone Punnapob took Uttaradit’s fourth corner. Hit deep to the far post it was knocked down by Patipat for Anucha, unmarked and seven yards from goal. Taking a touch with his left foot he side-footed emphatically past Jaturong. A tidy finish; though Chiang Mai, with 8 players in the six yard box were guilty of ball-watching. 0-1 Uttaradit.

Chiang Mai responded quickly; breaking forward for Samroeng to spread the ball wide to Ryo just outside the Uttaradit penalty area. Vittaya made the mistake of giving Ryo too much space and the Japanese striker stepped inside and with a short backlift curled the ball past Vittaya and Kiattisak into the bottom left corner of Teerayut’s goal. 1-1.

Looking for a second goal Kongateechai and Sorada both brought good saves out of Teerayut before the first half ended 1-1.

The second half continued much as the first half ended with Teerayut, dressed like a festive tangerine, making a series of fine saves starting with an early block off Nattachai at the far post.

His best saves came together midday through the second half. A Bamba corner was met by a thumping header from Nieblas and Teerayut leaped to his left to one-handed turn the ball over the crossbar. The subsequent corner bringing another diving save, this time to his right, from Nattachai’s header.

Nattapoom replaced Kongnateechai. Consistent pressure from Chiang Mai could not be converted into goals.

Then in the last minute of regular time Nattachai tried to burst between M’Boa and Kittisak into the Uttaradit penalty area. Tripped; the referee’s whistle was immediate. Penalty. Ryo steps up to take the penalty. Runs up. Stops. And rolls the ball to Teerayut’s right who made a good low save.

Full time. 1-1. Uttaradit had been hanging on. Sitting ever deeper and hoping to catch Chiang Mai on an increasingly rare break.

Into extra time and there was likely to only be one winner. Uttaradit were tiring quickly – cramp an increasing problem.

Sadney replaced Nattachai – at last – his physical presence was a long overdue challenge for the Uttaradit defense.

Still, Uttaradit were holding on and there were just 15 minutes remaining. Teerayut stood firm; making a terrific catch from a deep Bamba cross under pressure from Nattapoom. He then made a comfortable catch from Sorada and looked relived when Ryo’s cross evaded both Nattapoom and Sadney.

With just three minutes remaining, Ryo’s reverse pass into the area was perfect for Warut who laid a first time ball back for Nattapoom to side-foot home. 2-1 Chiang Mai.

A minute later and Atthawit (on as substitute) clipped the ball forward for Ryo to head down for Nattapoom, who beat Teerayut to the ball and poked it goalwards where M’Boa could only help the ball across the line. 3-1 Chiang Mai.

Game over. Chiang Mai FC go into the round of 32. A home draw against interesting opposition would be welcome. BG anyone?

It was a good, entertaining cup tie in which Uttaradit played their part to the full; running out of steam but never out of heart; Teerayut, making his first start of the season gave an outstanding and confident display in goal.

Chiang Mai will be encouraged by the win; creating opportunities throughout the match and eventually breaking down Uttaradit’s defense before the perils of a penalty shoot-out.