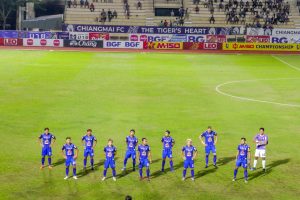 Low-flying Uthai Thani (Air Force United until the start of this season) arrived in Chiang Mai without a win in their previous 12 games and rock bottom of the Thai Championship with just five points.

Chiang Mai Coach Amnaj Kaewkiew made two changes to last weekend’s cup side with Khorraphat returning in goal and Atthawit back in the side for Siwakorn.

Uthai Thani had lost 1-4 at Khon Kaen United in the League last week and made four changes with Sitthikorn in goal and Jedsadakorn, Suchon and Nontapat all starting. Their side is built around three foreign players with the tall Korean centre half Park and up front the Brazilian Thales Lima and Ghanaian winger Prince Amponsah.

What was in the end a comfortable win for Chiang Mai FC disguised a dismal first half; the half time discussions must have been lively as Chiang Mai’s second half display looked like a different team.

First a quick rant – whoever thought that one team playing in all blue and the other team playing in dark green was a good idea had not thought how this might look for the 1,100 spectators.

Chiang Mai’s sole first half tactic appeared to be to pass the ball around the back line; eventually reaching Atthawit who would then hoist fifty or sixty yard diagonal balls forward for Ryo, Nattachai or Kongnateechai. It was all too easy for Uthai Thani’s defensive line.

Indeed, it was Uthai Thani who created the better chances in the first half. Three times either Thales or Prince were able to get to the goal line down the left side; the first two occasions saw their crosses evade everyone in the penalty area and on the third occasion Khorraphat saved bravely in front of the advancing Thales; taking a boot to his shoulder at the same time.

With half-time imminent a shocking throw from Sitthikorn was intercepted by Samroeng who was tripped by Suchon; rightly booked. Bamba’s free kick was punched clear by the atoning goalkeeper.

In the stands were some 25 participants from the AFC “C” coaching course currently underway at Alpine. They were enthusiastically taking notes – perhaps in an effort to stay awake. They would have learned little in the first half.

There were no changes to either side at half-time; but Chiang Mai did emerge with greater intent. The long hopeful hoik forward replaced by a determination to exploit the space between Uthai Thani’s defense and midfield and to break the lines of their defensive setup.

Chiang Mai started to pass the ball upfield and to take on and move past their opponents. Building attacks from an advanced platform rather than the long ball forward from the back line.

The results were not immediate but the signs were good that it would just be a matter of time before Chiang Mai’s possession and pressure produced results.

58 minutes gone; and Chiang Mai had their first shot of the match with Atthawit’s well-hit 25 yard effort clearing the crossbar.

One minute later a little bit of Ryo magic set up the opening goal. As we have seen often before this season, he picked up the ball wide left; then cut inside beating Park and Thammarat before curling a low right foot shot. The goalkeeper should have probably done better than to simply push the shot out in front of his goal where Nattachai was unmarked to side foot the ball home from twelve yards.

Sadney, to acclaim from the crowd, replaced the ineffective Kongnateechai.

Uthai Thani still pushed forward looking for an equalizer – substitute Wichan volleying over from in front of goal; and Prince heading into the arms of Khorraphat.

The Ryo show continued with the second goal in the 67th minute; his midfield flick forward released Nattachai on the right who beat Suchon and then unselfishly squared the ball back to Ryo, who had continued his run, for a simple tap in and 2-0.

Sadney had already threatened on the left side when with ten minutes to go he advanced in space from forty yards out, turned Park inside out and then stroked home a left footed finish inside Sitthikorn’s near post for 3-0.

It was, after a laboured first half, a comfortable win for Chiang Mai which keeps them fourth in the table. Meanwhile Nakhon Pathom, who have won four of their last five games, were demolishing Khon Kaen United 4-0 which opens up the battle for second place in the Championship with just four games to go until mid-season.

Next up – a visit to everyone’s favorite stadium in Lampang. There will be a good crowd from Chiang Mai. 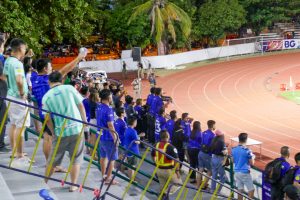 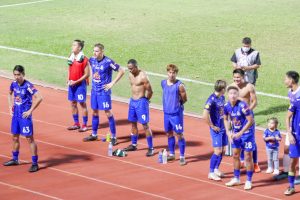