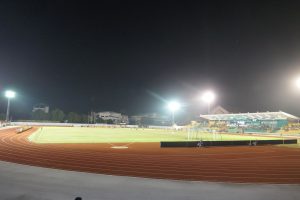 After three successive away wins at Ranong, Customs and Phrae, Chiang Mai FCs supporters arrived in Lampang in large and loud numbers looking for another three points; this time from their near neighbours, nicknamed The Emerald Chariots.

Instead Chiang Mai looked a shadow of their best form with a performance that was low on both commitment and quality.

There was a moment in the 82nd minute that summed up the game. Chiang Mai were a goal down. They win a free kick ten yards into the Lampang. Athibordee knocks the ball backwards to Nieblas; Nieblas right foots the ball back to Athibordee who then hits a 40-yard pass back to Khorraphat. Khorraphat give the ball to Nieblas who hits a hopeful 60-yard lob forward – bread and butter to the excellent Jakkrit and Kitsada in the Lampang defense. No imagination and no sense of urgency.

An uneven and bumpy pitch did not help but both sides are playing on the same surface and simply Lampang worked harder, showed more desire and took one first half chance.

Chiang Mai made two changes from last week with Siwakorn replacing Atthawit and Nattaphoom in for Kongnateechai. Atthawit sat out the game as a substitute. It is unclear why. He can be frustrating to watch but he also has the quickness of thought, and quality of delivery, to change a game. Siwakorn is workmanlike at best.

Lampang, after three defeats in their last four games, appointed Somchai Makmool, once of JL Chiang Mai, as head coach earlier in the week. He brought in Samerpak and the Myanmar midfielder, Aung Kaung Mann for Ponsil and Kittidet.

Alex Rafael, very briefly of Chiang Mai FC (at the start of this long season) started up front for Lampang with the Brazilian, Douglas, who joined Lampang from Helsinger in Denmark.

Yuki Bamba almost opened the scoring with a precocious free kick after 14 minutes. Wide on the left touchline and nearly 40 yards from goal he looked up to see goalkeeper Jirunpong some eight yards off his line. The free kick was floated towards the keeper who back-pedaling was able to turn the ball over the bar as he crashed into the upright, for which he needed treatment.

At the other end Khorraphat turned a Somsak shot over the bar to concede a first Lampang corner. Taken by Alex, Chiang Mai’s clearing header was poor leaving the ball bouncing around the penalty area and while the Chiang Mai defense was ball-watching leaving Somsak, unmarked, to make no mistake this time and sweep home his half-volley. 1-0 Lampang.

Chiang Mai’s best moments, as they often do, came from Ryo, but just half chances and glimpses of what he is capable of. A volley over the cross bar, a scuffed shot from close range after he wriggled between Jakkrit and Kitsada.

At the other end Alex bent a long rage free lick around the wall for what looked a comfortable save but instead saw Khorraphat punch clear for a corner.

In first half injury time a long diagonal ball reached Ryo to the left of the penalty area. He tried to go on the outside of Pharanyu before falling. No penalty said the referee. That was the last action of the first half and the referee was promptly surrounded by Athibordee, Eakkaluk, Apisit Sorada, Samroeng and Nattaphoom. They would have been better channelling their frustration at their own performance.

Chiang Mai opened the second half brightly – almost identical corners from the right first saw Nattaphoom’s floating header flicked over the cross bar and then the forward headed the next corner over the bar from short range. That was a close as Chiang Mai were to get to a second half goal.

Douglas should have sealed the game for Lampang in the 57th minute. Alex breaking down the right slid an inch perfect pass in behind Athibordee but the big forward, who had left Samroeng in his wake in midfield, could only side foot the ball at Khorraphat from 15 yards. The goalkeeper parrying the shot and making enough of a recovery to stop Douglas taking advantage of the rebound.

Sadney replaced Nattachai with thirty minutes to go. But no one noticed any difference. Lampang kept their shape, were organized, efficient and worked really hard for each other. It was not pretty to watch but it was very effective.

As the final whistle blew Chiang Mai, led by Athibordee and Eakkaluk, were again complaining to the referee. The officials were not the reason that Chiang Mai lost this match.

To add to the sense of frustration Nongbua Pitchaya could only draw tonight at Udon Thani and Khon Kaen United lost at home to Phrae.

The mid-season transfer window could tell us a great deal about the ambitions, or otherwise, of Chiang Mai FC.

Emerald green shirts on a green football pitch are not a great idea.

The away area at Lampang has relocated since the last Chiang Mai visit two seasons ago. It is still distant, dangerous and dismal.

Lampang also appear unconcerned at the Thai League’s coronavirus safety requirements. Social distancing was a non-starter in the away pen. 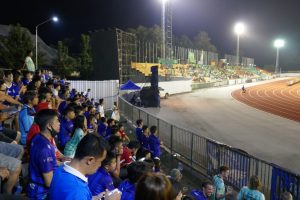