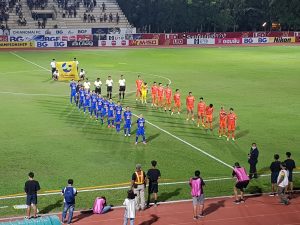 Generally in football you get what you deserve. This was very true on Saturday night. A good win over an obstinate Sisaket side took Chiang Mai FC into second place, at least overnight, in the M150 Championship.

Sisaket take the long trip home with no points and few new friends. They are not an easy team to watch.

Coach Amnaj Kaewkiew, unusually, and encouragingly, animated all evening, made three changes to the Chiang Mai side that struggled last week at Lampang. Sadney started up front; Atthawit replaced Siwakorn in midfield and Meedech came in for the injured Nieblas with Athibordee moving to the center of the back three. Oddly Chiang Mai named just five substitutes, including two goalkeepers.

Sisaket have had a poor run of form with just two points from their last five games. Their biggest problem is in front of goal with just seven goals in fifteen games this season. Mind you, it is hard to score goals when you line up with a solitary forward and ten men behind the ball.

In all, Sisaket made six changes from the side that lost last weekend at home to Khon Kaen.
Before the game there was a minute’s silence for Diego Maradona. Not everyone stood.

It was clear in the opening minutes that Sisaket were set up to defend. The issue for Chiang Mai would be how to break down their defensive lines. As it turned out it did not take long, when with pleasing simplicity Chiang Mai opened the scoring in the eighth minute. Eakkaluk’s ball forward from the centre circle was flicked on by the side of Ryo’s right boot into Sadney’s run into the penalty area. He held off Chanlatit to calmly tuck the ball past goalkeeper Prin into the bottom corner. 1-0 Chiang Mai.

A second goal would have deflated the visitors. Crosses from Ryo and Sadney both on the right side failed to reach a colleague. Ryo’s 25 yard shot narrowly cleared the crossbar.
At the other end Korraphat did well to smother at the feet of Kento Nagasaki after the ball was chipped forward from the center circle. It was an unheeded warning not to be complacent.
Sisaket won the first corner of the game after 42 minutes. Nagasaki’s corner was headed clear by Athibordee. Atapong reacted first on the edge of the penalty area – but his shot rebounded off the referee who invoked the new rules that call for a drop ball after interference from an official.

The 2020/2021 drop ball rules require the referee to designate the team and player that last touched the ball and allows that player an unchallenged use of the ball, after it has bounced, with opposition players at least four yards away.

Atapong initially tried to volley the ball out to the right wing. The referee insisted on a retake. This time the ball bounced and Atapong tapped the ball forward for Sakda to burst past Athibordee and to chip the ball past the helpless Korraphat from the left side of the six-yard box. 1-1.

I suspect the drop ball laws get little attention in daily practice – either defensively or offensively. Maybe they need more attention because Chiang Mai were badly caught out.

So; 1-1 at half time. Sisaket had been dismal but had scored from the one chance they created, with some help from the referee, in the first 45 minutes. 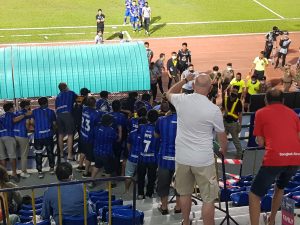 Into the second half and almost immediately Ryo was floored by a flying elbow.

Atthawit’s cross from the left for Nattachai’s powerful header brought a good reaction save out of Prin.

Ryo then hit the crossbar after one of his trademark mazy runs – cutting in from the left side, leaving defenders in his wake and then just curling his finish a fraction too high.

Atapong then pulled down Ryo in full flight – even this did not warrant a yellow card. Indeed, there were no yellow or red cards in this game.

A super block by Katano denied Nattachai after a fine pass from Sadney set up the Thai forward.

Another run infield from the left side saw Ryo pulled down again – this time Atthawit’s free kick warmed up the wall.

Chiang Mai’s 66th minutes corner was the source of the home team’s second goal. Bamba’s corner dropping onto the right foot of Eakkaluk some seven yards from goal, who with a finish of real quality volleyed the ball home. Meedech had stood his ground in front of Katano who rather theatrically threw himself to the playing surface. Sisaket’s protests were again led by Atapong. 2-1 Chiang Mai.

Ryo was then on the receiving end of a lovely pass from Sadney and, one-on-one with Prin, Ryo’s shot passed just wide of the far post.

Atapong – it was hard to keep him out of the game, then flattened Tassanapong (on as a late substitute for Samroeng); the referee deeming it to be a fair challenge. Not one yellow card was produced during the match.

Some cramp for Athibordee; Siwakorn replacing Nattachai. And it was all over. Chiang Mai emerging as deserved 2-1 winners.

Creating good chances Chiang Mai needed to finish better to take the game away from Sisaket.

However, the second half performance showed real effort and determination. The football was more direct and players were willing to take on the Sisaket defense, rather than working the ball square or back and then seeking an opening.

Next weekend is the Chang FC Cup Round of 32 with Chiang Mai visiting Thammasat University to play the amateurs of Dome FC. A week later league action takes the team to Udon Thani.

The next home game is on 19th December and will be the much-anticipated Chiang Mai derby. 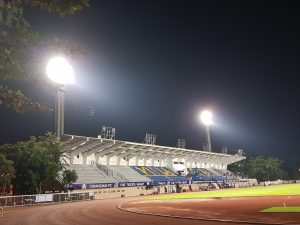