Unchanged from last week’s home game against Sisaket Chiang Mai fielded a full-strength team in the last 32 round of the Chang FA Cup against fourth tier Dome FC.

Dome FC are running away with their section of the Bangkok Premier League; the fourth tier of the Thai league structure. They are based out of Thammasat University and play at the main university stadium, better known as the home ground for Bangkok United. Under their excellent lights the stadium looked a picture.

Dome have won nine of eleven league games this season. They score goals for fun, with 61 scored and just 3 conceded. They deserved to be taken seriously.

The opening exchanges were quiet; Nattachai coming closest when he volleyed Sadney’s cross over the bar from six yards.

At the other end Panuwit’s free kick reached Channarong who had peeled off Meedech at the far post but his header looped to Korraphat in goal.

Chiang Mai continued to press forward; a Meedech cross from the left was acrobatically caught by Prakaphon whose hasty challenge a few minutes later on Sadney might have been deemed a red card by a less generous referee. Apisit Sorada, enjoying plenty of space on the left side, then saw his cross evade the flailing keeper and fall to Nattachai who chipped over the crossbar, under pressure from Siwamet and Nattawat, who managed to injure each other as they tried to block the Chiang Mai forward.

The opening goal was as unlikely as it was welcome. Chiang Mai’s first corner was swung into the area by Bamba. It fell awkwardly to Meedech in the penalty area; he was strong enough to hold off Watcharapong and to then pirouette through 360 degrees to volley the bouncing ball left-footed into the bottom right corner of Prakaphon’s goal. 1-0 Chiang Mai.

Chiang Mai’s second came shortly before half time and that felt like game-over. It was a pacey, fluid attack led by Bamba and Ryo releasing Samroeng down the right wing and his hard and low cross reached Nattachai to guide the ball home at the far post. 2-0 Chiang Mai.

It truly was game over four minutes after half time. Breaking forward after a period of defensive keepball Nattachai’s pass eluded both Sadney and the defender Watcharapong reaching Ryo some 25 yards from goal. His first touch was a little heavy but Prakaphon was slow to leave his line leaving Ryo with time to round the keeper and slide the ball home with his left foot. 3-0 Chiang Mai.

Chiang Mai were dominant – Ryo had a loud claim for a penalty when his close-range shot was blocked by a defender. He then took advantage of tired defending for the fourth goal. A trademark Ryo finish as he dropped his left shoulder to go outside the cumbersome Siwamet and then open his body to side foot the ball inside the far post. 4-0 Chiang Mai.

Nattachai looked to be pulled down by a lunging tackle when clear on goal; similarly Sadney fell in the area in the last few minutes under a heavy looking challenge. By this time the referee had stopped moving beyond the centre circle and the referee’s assistant looked disinterested in assisting.

Dome had, to their great credit kept battling away, and Panuwit, who was mostly excellent throughout, took a pass some 22 yards from goal, beat Meedech and a rather tame challenge from Samroeng, to rifle his left foot shot high past Korraphat for a thoroughly deserved and well celebrated consolation goal.

An efficient performance from Chiang Mai; two quality goals from Ryo and a first goal of the season for fan-favorite Meedech. A good night’s work.

And a game made all the more enjoyable by the company, and commentary, of Simes Salmon whose round-trip drive was more than worthy of Apisit Sorada’s shirt at the end of the match. 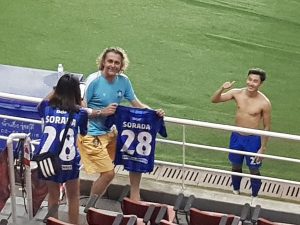 The next round will be played on Wednesday 13 January; three days after our league game at Kasetsart.