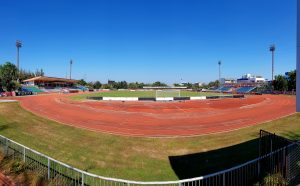 This is a hard report to write. Chiang Mai were truly poor. Out-played, out-battled, and out-witted by an Udon Thani side that simply wanted a result so much more than the visitors.

These games will never be easy in this League on a very bumpy pitch and against an opposition who badly wanted the points. But these are also the games that you have to get something from if you are to contend for promotion.

Unfortunately Chiang Mai got exactly what they deserved.

The good news for the team is that there were only five Chiang Mai fans present to witness arguably the lowest point of this season. “Five go to Udon” is not an Enid Blyton title.

The only change for Chiang Mai saw Sadney, who is apparently leaving the club, replaced by Kongnateechai.

Maybe there is some significance in that. Some of the players must be hoping for a mid-season recall to their parent club; and their effort and commitment was so much greater than on their October thumping at Chiang Mai United.

Udon Thani have perhaps the worst club song in the Thai League – unfortunately it is on repeat for the hour up to kick-off.

The home team scored from their first attack; and it was a rare moment of quality football. Just four minutes gone and Udon’s Australian midfielder, Jesse Curran, in space wide on the left and about half way inside the Chiang Mai half looked up and saw Sihanart sprinting into the penalty area leaving Apisit Sorada trailing. Curran chipped the ball forward over Eakkaluk and Sihanart needed just two right-footed touches; the first brought the ball under control; the second slid it past the advancing Korrapat. 1-0 Udon Thani.

Sihanart might have added a second in the 12th minute as he cut inside from the right making space for a left foot shot from the edge of the penalty area; a comfortable save for Korraphat.

At the other end Chiang Mai’s first corner was headed wide by Athibordee.

24 minutes gone and Udon Thani were inches from doubling their lead. Bamba gave the ball away in midfield. Rittiporn beat Meedech to the bouncing ball, and eased past a feeble challenge from Eakkaluk before pulling his shot inches wide of Korraphat’s far post.

Bamba winning a ball in midfield saw his clever chip headed over both the advancing goalkeeper and the crossbar by Kongnateechai.

Half time and the visitors went in just 1-0 down and the fab five waited optimistically for our usual second half revival.

Udon Thani brought on Joao Paulo for Sihanart at half time.

The second half meandered along with little happening. Substitutions were made without effect. The Udon Thani medical team spent more time on the pitch than off as one player after another sort to disrupt the game and use up time even after the mildest of challenges.
Then with ten minutes to go the game livened up.

Curran was booked for hauling down Meedech in full flight.

Chiang Mai’s best chance of the half fell to Atthawit who slammed his shot into a defender from close range, after good work from Kongnateechai to release Samoeng on the right side. This did not happen enough.

Confusion followed immediately between Eakkaluk and Atthawit as a Chiang Mai free kick dribbled to Curran inside the centre circle. Seeing Korraphat well of his line his audacious, near 50-yard, effort took one hard bounce in front of goal and crept over the crossbar with Korraphat stranded.

Chaloempat fumbled in his own area under a challenge from Kongnateechai whose shirt was being tugged by Kapisoda. The referee gave the free kick in favour of the home side. Not a surprise but it was both poor goalkeeping and poor officiating.

Some Oscar worthy Meedech theatricals, throwing himself to the ground, after a corner was awarded to Udon Thani, suggested that Chiang Mai felt they had been on the wrong end of most decisions. Some maybe; but to a player Chiang Mai had not been good enough.

The officials announced five minutes of injury time – maybe half of what a realistic number should have been.

In the 93rd minute Sorada enjoyed some payback on Curran; Sorada was booked and the free kick proved costly. Prakit released Curran on the right, who this time skipped past Sorada and crossed to the back post where Rittiporn was goal side of Samroeng to head home for a 2-0 lead.

Another Curran foul brought his second yellow card and a sending off. It was hard to tell why he protested.

With further treatment extending injury time Chiang Mai were given a penalty in the 98th minute as Kapisoda brought down Chiang Mai substitute Porncha. The Udon Thani protests used up more time before Athibordee stepped up to take the penalty.

Chiang Mai fans knew he would not score and so it proved as Chaloenpat saved well low to his right. It was the last kick of the game.

A deserved win for Udon Thani who were much the stronger side. Chiang Mai were unable to change their game plan and had few options on the bench. Nattaphoom for Nattachai is basically the same player doing the same things. Ryo looked frustrated and irritable and had little service from either midfield or the wide players.

Try something different was the plea from Chiang Mai fans – maybe push Meedech up front for the last 25 minutes; at least give Kapisoda something to thing about. It was not to be.

One note on the Chiang Mai fans; Udon Thani had announced that anyone from Chiang Mai would be subject to fourteen days quarantine. They then rescinded that notice but given the unpredictability of the situation it is no surprise that fans chose to avoid the ten-hour drive. They will likely be happy not to have traveled. 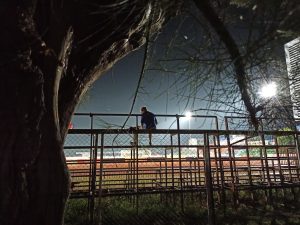 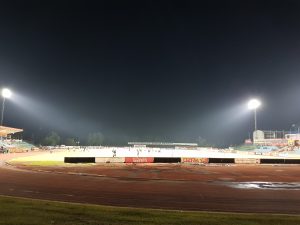