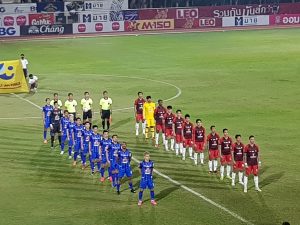 Chiang Mai’s first competitive derby proved, as with most good derbies, to be hard-fought and competitive. But it was also a match short on quality and long on effort.

Both teams will think they should have taken all three points but after a second half dominated by the home team Chiang Mai United will be happier with the draw.

Chiang Mai restored Sadney to the starting line-up, replacing Kongnateechai; this was Sadney’s last game for Chiang Mai. His replacement, Jonathan Bernardo, was watching from the stands. Tassanapong replaced Atthawit in midfield, giving the home side more graft, but less guile.

Chiang Mai United were unchanged from the team that eased past Lampang last weekend.

As kick off approached conditions were ideal and the Covid-reduced crowd in good voice.

An uncompromising early challenge between De Leeuw and Eakkaluk was a good indication that this would be a feisty game. It was also clear that the young referee, who was generally excellent, understood the occasion and would allow some more robust challenges.

12 scrappy minutes gone and Bamba on the right wing pulls the ball back for Sadney who has dropped back to the edge of the penalty area; his first touch was heavy but inadvertently gave him the room to drag the ball onto his left foot and shoot; Boworn launched himself into a block but the ball hit his left hand with the referee well-placed to see the incident. Ryo steps up to take the penalty. He goes side foot straight down the middle; Nont has dived right but can adjust his trailing leg to block Ryo’s poor effort.

Chiang Mai United were close to taking the lead on 22 minutes when Phongsakorn’s volleyed cross reached the leaping Evson; his header was turned wide by a combination of Korraphat and the right hand upright into which the goalkeeper crashed with some discomfort.

The second of two successive corners saw Evson and Meedech come together for some mild wrestling. A gentle push from Evson saw Meedech throw himself to the ground holding his neck. It was an embarrassing look for one of the team’s hard men.

Chiang Mai United’s goal was a simple example of route one football. Nont’s long clearance was headed on by de Leeuw. Jeong was already running at pace behind the ball-watching Eakkaluk. A flick of the head from Kantapong and the ball was at the feet of Jeong who calmly slid his finish right-footed passed the advancing Korraphat leaving Chiang Mai FC unsuccessfully claiming offside.

A rare first half chance followed for Chiang Mai FC when Nattachai could only head Sorada’s volleyed cross into the hands of Nont.

A word on Evson who was dominant in the first half – a walking ball-magnet. Strong in defense and a constant threat in attack. There is a rumour that he might in fact be staying at Chiang Mai United.

Almost out of the blocks for the second half, Chiang Mai United might have added to their lead. Phongsakorn’s free kick reached Poonsak Masuk at the far post and his close-range half-volley rebounded off the upright with such power that it set up a counter-attack for the home side.

Nattaphong replaced Kantapong 10 minutes into the second half as Chiang Mai United moved to a more defensive formation. It also left more space in midfield to be exploited by Chiang Mai FC who stepped up their pace and passing game.
Meedech’s reverse pass released Sadney down the right, his cross was inches beyond the stretching Nattachai.

Then Nattachai, controlling a pass from Bamba on the left, shot straight at Nont.

A fast, flowing break down the right by Bamba and Ryo moved the ball forward to Samroeng whose cross was cut out by Evson for another corner.

In a rare attack on Korraphat’s goal the unmarked Poonsak Masuk should have done better than a missed connection with Sorada’s volleyed cross.

Half way through the second half Chiang Mai won another free kick. Yuki Bamba lifted the ball forward towards the six-yard line. The ball cleared both Evson and Sirisak leaving Sadney to head powerfully downwards on goal. Nont blocked instinctively with his feet but Sadney smashed the rebound into the roof of the net. 1-1. It was no more than Chiang Mai FC deserved.

At the other end Korraphat and Jeong crashed together converging on de Leeuw’s chipped pass forward. Both were brave but it did appear that Jeong was jumping at Korraphat rather than the ball. The referee awarded a foul only.

Chiang Mai FC were buzzing leaving no time for United to settle. Bamba’s free kick turned from a cross into a shot that Nont had to turn over the crossbar. The corner was played to the front post where Sadney’s flicked header was punched uncomfortably clear by Nont.

Ryo released Porncha (on for Nattachai) on the left but his shot sailed wide of the far post. A Ryo shot was blocked by Sirisak as he collapsed to the ground.

From a short corner Tassanapong then volleyed a half-chance over the cross bar.

Despite Chiang Mai FC’s second half pressure it was United who nearly stole the game deep into injury time as Korraphat was quickly off his line to save with his feet from Poonsak, released by de Leeuw’s pass.

Nine corners against three; six shots on target against one. A missed penalty. Chiang Mai FC will think they should have won this match. This could be the beginning of a long rivalry.

Coach Amato’s move to a more defensive formation early in the second did seem premature. United do look a better team pressing high and using their power up front.

Meanwhile at the half way point of the season Nongbua are ten points clear and must be the firmest of favorites to be promoted as champions. Chiang Mai United are second on goal difference leading six clubs separated by only five points.

There was some trouble between rival fans after the game behind the dreadful away supporters’ pen. Police were present in good numbers to ensure that the assaults remained verbal not physical. 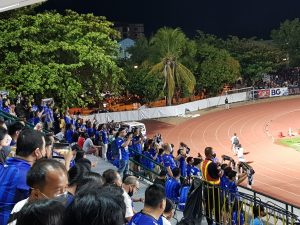 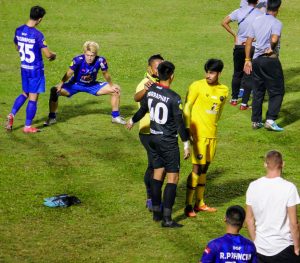 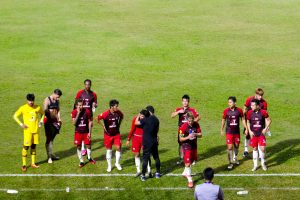 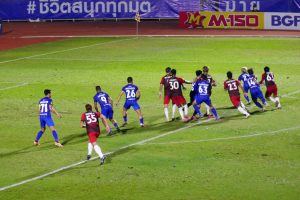