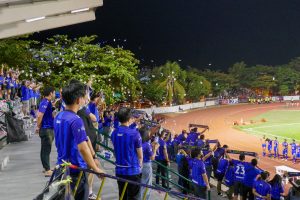 A season that started back on February 16th reached its half way point ten months later.

Just four matches were played before the six-month coronavirus shutdown of all football in the Kingdom.

Credit to the League. Crowds, albeit far fewer, were allowed in stadiums when football re-started in September; and the decision to mirror the timings of the European leagues and play football in the winter months feels like a success with far more comfortable conditions for the players and supporters.

The news for Chiang Mai supporters has been mixed. There have been some outstanding individual and team performances. While others have been bewilderingly awful.

As it stands CMFC are seventh in the league. The top two teams are automatically promoted. The next four play off for the last promotion spot. It is a good way of keeping many game interesting until the season’s long overdue end.

Nongbua are nearly out of sight at the top of the table. But CMFC are just five points off second place. And the second automatic promotion place is wide open. On the evidence of the season so far there really is not one side with the quality that will assure promotion, without making significant changes to their squad in the transfer window.

To progress in the League CMFC’s away form will need to show significant improvement. In nine home games CMFC have lost just once, with three draws and five wins. There will be nine away games in the second half of the season.

A run in the FA Cup is a bonus with CMFC reaching the last 16 for the first time. A visit to Trat is another long pilgrimage and comes between away league games at Kasetsart and Khon Kaen United in the same week.

So rather than a recap of the season I have opted for the mid-season awards:

Goal of the Half Season

There are a number of very good contenders:

Ryo at Ayutthaya – cutting inside from almost the corner flag to score with his right foot inside the far post.
Nattachai v Navy – a low cross from Apisit Sorada, a Ryo dummy and rifled home by Nattachai.
Ryo at Ranong – a solo run and finish in appalling conditions.
Ryo v Chainat – his second of the evening – goes right, then left before a left foot shot.
Nattachai v Chainat – an inch perfect pass off the outside of Ryo’s right foot for Nattachai to rifle home.
Sadney at Customs – a solo effort from 25 yards that changed the game and was still rising as it hit the net.
Ryo at Customs – we have seen this before – running at defenders from the left – cuts inside and bends the ball inside the far post.
Sadney v Sisaket – clever flick from Ryo for Sadney to finish.
Meedech at Dome – this has to be on the list – an unlikely scorer with a pirouette and finish.

My choice of winner: Sadney at Customs. It was a stunning strike. In consolation Ryo has to be the club’s player of the opening half of the season.

Goal Celebration of the Half Season.

Sadney’s version of a Roger Milla at Customs.
Atthawit’s half run, half waddle at Phrae.

And my winner is Atthawit’s highly unusual and gravity defying run.

Team performance of the half-season

There is something of a theme here! The winner has to be the team performance at Ranong. In a game where flippers replaced football boots CMFC were outstanding.

Individual away team performance at the Municipal Stadium

Nvida’s four goals for Nongbua Pitchaya
Teerayut – the Uttaradit goalkeeper who kept his team alive until the last five minutes of extra time in the FA Cup.

And the winner is Nvida. He was unstoppable.

Controversy of the half season

Just one nomination and therefore the winner – Sisaket’s goal from a twice taken drop ball.

Individual CMFC performance of the half season.

Ryo at home to Kasetsart – becoming a fan favorite in his first home game
Samroeng at home to Khon Kaen United – his determination created the only goal of the game.
Korraphat at Phrae. His penalty save seconds before half time changed the game.
Dennis Nieblas at Phrae – the opening goal in a strong performance,
This is a bit of a cheat but – Athibordee, Eakkaluk and Meedech as a back three at Ranong.
Ryo at Ranong – two goals in a game when scuba gear might have been more useful that football kit.
Sadney at Customs. The first and third goals in a powerful and assured second half.

And the winner is Korraphat at Phrae for keeping CMFC in the game with agility and bravery. Goalkeepers’ union!

Most inept display by an away team at CMFC

Only one nomination and therefore the winner (it may be all that they win this season!) – Chainat Hornbill FC. The first two goals conceded in the opening ten minutes would have disgraced a primary school side.

CMFC player of the first half of the season

The winner – and this is unlikely to be controversial – Ryo for his love of the game and his goals and even on bad days for constantly trying to make something happen.

This is a very personal look at the first half of a very strange season. I am sure I missed many favorite moments. Hopefully we play again on Saturday with the same crowd rules. Boxing Day, and New Year, football should become a Thai tradition.