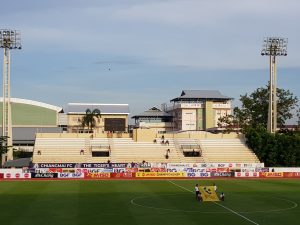 This has been the strangest of years. And it ends with me sitting on a sofa, watching football played in an empty stadium, pen in one hand, red wine in the other…and a plate of Christmas Day leftovers for half time.

Though, who seriously eats a Quinoa salad for Christmas?

It was such a shame that Chiang Mai’s fans were unable to cheer one of the better wins of the season; a hard-working and deserved 2-1 win over Nakhon Pathom United.

The visitors started the game in fourth place and had scored 14 goals in their last five games. They were not short of confidence.

Chiang Mai gave a debut to Jhonatan Bernardo, newly arrived from Ranong. Replacing Nattachai this was the only change from last week’s derby draw. Bernardo would lead the line with Ryo and Sadney either side of him.

The good news. It appears that Sadney, who some media had announced as leaving the club, now looks to be staying through the second half of the season.

Nakhon Pathom are a well-settled side and made just two changes, bringing in Watcharapon and the Laos international Phoutthasay.

The early momentum was with the visitors. Their first corner was met by the Iranian defender Hamed and his header was cleared off the line by Apisit Sorada at the near post.

Jirapan breaking down the right saw Korraphat slip as he advanced from his goal, but the keeper was able to adjust as he fell and raise an arm to turn Jirapan’s shot for a corner.

Ekkabhum wide on the right then crossed for Jirapan, again in space inside the penalty area, but the forward pulled his shot wide of Korraphat’s left hand upright.

Mid way through the first half the momentum started to change. Ryo’s bending right foot shot was deflected narrowly wide.

Bernardo then won a free kick on the left corner of the penalty area as Hamed tackled the player rather than the ball. Tassanapong’s powerful free-kick rattled the crossbar with goalkeeper Nopphon well beaten.

A minute later Chiang Mai took the lead with a terrific goal which suggests that the club’s international front line, a Japanese, a Brazilian and a Namibian, could be great fun to watch in the second half of the season.

Nopphon’s poor clearance fell to Sadney on the center circle. He laid the ball to his left for Ryo before sprinting into space on the left side of the penalty area. Ryo’s return to Sadney was beautifully weighted and his first-time left foot cross was met by Bernardo’s unstoppable header. 1-0 Chiang Mai.

At the other end Dos Santos broke through a tame Samroeng challenge and released Jirapan who was unable to beat the advancing Korraphat.

Then just before half time Korraphat excelled with a near post reaction save to deny (again) Jirapan’s powerful shot from a narrow angle.

The visitors made two changes at the start of the second half including bringing on the Brazilian Neto for his debut after his move from Navy.

Sitting deeper in the second half with Samroeng and Sorada moving into the full back slots Chiang Mai were happy to play o the break using Bernardo as the target player that Chiang Mai has not had for much of the season.

One such break from the home team’s penalty area in the 70th minute led to the second goal. Bernardo’s strong header found Ryo, Sadney ran across to the left side taking a defender with him, leaving Bernardo in space. Ryo fed the ball wide to Bernardo on the edge of the Nakhon Pathom penalty area. His first shot was blocked. His second was stopped on the goal line by Prat. Ryo was the most alert, springing to, and rifling home, the rebound. 2-0 Chiang Mai.

Nopphon then deflected a dangerous Samroeng cross away from the onrushing Sadney. And a classic Ryo break saw him cut inside from the left wing and his curled right foot shot was well saved by the Nakhon Pathom goalkeeper.

Suddenly, and really from no-where, with five minutes and injury time to play, Nakhon Pathom were back in the game. Dos Santos running between Eakkaluk and Athibordee to reach substitute Teerayut’s cross from deep on the left side and send his header past Korraphat, where it fell from the crossbar, clearly crossing the line.

There was one last chance for the visitors as with almost the last kick of the game Neto’s cross evaded Dos Santos stretching in front of goal.

Chiang Mai, at least for tonight, moved from 7th to 4th, ahead of Nakhon Pathom. It was an important win and a strong team performance.

Bernardo had a memorable debut with a goal and an assist. He offers height and strength holding the ball up for Ryo and Sadney who enjoyed space they have not had all season. His height is also a real asset when defending set pieces.

There is a two-week break before the next league match at Kasetsart.

It is good to feel optimistic as we enter 2021 and the second half of this long season.

Finally can I wish the readers of CMFC English a peaceful and happy New Year. Be kind to each other.