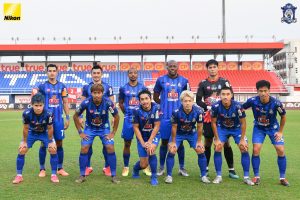 It is not often that the game matters more than the result. But with a league schedule of 16 games in eight weeks, starting next weekend, Chiang Mai had the opportunity to play a competitive match against League 1 opposition before the League restarts.

Training and friendlies have been all that is available to clubs for the last six weeks. So the cup tie at Trat could really not have been better timed.

Chiang Mai were unchanged from the XI that started the last League match on 26 December before the latest shutdown. This has Tassanapong and Bamba in front of the back three with Samreong and Apisit as wide wingbacks and Ryo, Sadney and Bernardo upfront.

Trat have acquired ex Chonburi defender Junior Lopes, a man with a serious haircut. He was to be one of Trat’s best performers on the night.

Talking of haircuts Ryo has a blue rinse – last seen on one of my neighbours in Birmingham many decades ago!

The game was streamed on AIS Play. As long as you had a one-off password to access the feed and did not mind the out of synch sound and picture feeds and the unpredictable replays. It was not great.

In front of a sadly empty Trat stadium Chiang Mai looked lively from the start. Within thirty seconds Suppawat was having to save with his feet from Apisit’s left foot shot. As Chiang Mai continued to push forward Eakkaluk shot wide from 30 yards.

Minutes later Santos met Mongkol’s cross but headed into the arms of Korraphat.

Trat were taking control at this stage and after 23 minutes they scored. By the most direct of routes. Suppawat belted his goal-kick long downfield; Reis headed the ball on for Mongkol to waltz through Athibordee’s tame challenge and chip the stranded Korraphat from 18 yards. It was a very cool finish by the ex-Thailand international, but the simplest of goals.

Santos might have added a second as he ran into space between Athibordee and Eakkaluk. But Korraphat was smartly off his line to smother the ball.

At the other end Tassanapong’s long range free kick was catching practice for the Trat goalkeeper who then did much better to cut out a dangerous left side cross from Apisit.

In a, by now, rare attack from Chiang Mai Bernardo and Ryo worked the ball with pace down the left; Ryo’s pass into the penalty area finding Apisit who should probably have hit a first time shot; instead his first touch took him wide and his second drove the ball over the crossbar.

The first half ended with Trat leading 1-0. They had looked more solid in defense whereas the Chiang Mai back three were struggling against Trat’s two barn-door-sized Brazilians, Santos and Reis.

Two minutes into the second half and Santos rose at the near post to flick on Pornpreecha’s corner. His clever header bouncing off the top of the cross bar with Korraphat beaten

The game was opening up with chances at both ends. Bernardo’s pace is deceptive and he drove into the penalty area only for Suppawat to half stop his low cross. Lopes reacting first to calmly clear the ball for a corner.

A Santos header was an easy save for Korraphat. The Chiang Mai keeper then making a good save low to his right to stop Reis who probably should have pulled the ball wide for the unmarked Pornpreecha.

Another Tassanapong free kick was pulled wide of the right-hand upright. Tassanapong’s free-kicks really never look goalbound; his holding role in front of the back three needs a player who tackles and distributes better. I do wonder why Atthawit appears to be out of favour?

Bamba took over free kick duties after Ryo had been unceremoniously blocked by Sathaporn. Ryo helpfully showing the referee how to hold the inevitable yellow card. Bamba’s free kick was on target and uncomfortably punched clear by Suppawat.

From Suppawat’s punched clearance the ball reached Apisit whose fine cross was met by Bernardo in front of goal – he headed the ball down only to see the Trat keeper launch himself to his left to turn the bounced ball over the crossbar. It was the save of the match.

As the teams started to tire Reis picked up another long clearance; cut inside Eakkaluk and curled the ball wide of Korraphat’s far post.

The last ten minutes were all Chiang Mai in their search for an elusive equalizer. Ryo’s wall pass with Bernardo on the edge of the area ended with Ryo’s powerful shot being well blocked by the defender, WItthaya.

Eakkaluk’s instinctive volley from a half-cleared corner narrowly also cleared the crossbar. And Ryo, getting a rare clean look at goal, hit his 20 yard shot straight at Suppawat.

There was just time for Reis to pick up a 95th minute booking and the game was over.

Trat will play in the last 8 of the Chang FA Cup scheduled for 3rd March. That same day Chiang Mai FC travel to Nongbua for a potentially significant match against the current Championship leaders.

Chiang Mai exit the FA Cup; but if the club is serious about challenging for promotion then this game was ideal preparation for the rigorous schedule ahead.