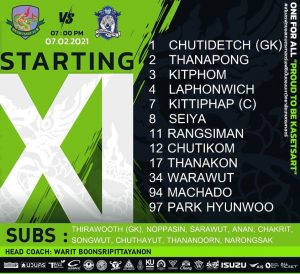 Goals from Sadney and Ryo were the reward for a thoroughly professional Chiang Mai FC win at Kasetsart University on Sunday night. At the heart of this good win was a man of the match performance from Yuki Bamba as he put barely a foot wrong throughout the 90 minutes.

Chiang Mai were unchanged for the third match in a row.

Meanwhile Kasetsart rather oddly announced a starting XII on their home facebook page – guaranteed to confuse everyone. The home team came into the game with plenty of confidence after a midweek 4-1 home win over Samut Sakhon.

New recruits at Kasetsart include the defender Park from Ayutthaya and burly Brazilian Ailton Machado from Muangkan.

The bumpy pitch sadly looked difficult for football; bunkers in midfield, assorted patches of heavy rough and divots where the pitch had been watered.

One of the downsides of the demise of the True TV deal is that clubs have to provide their own tv coverage and commentary. Kasetsart’s was woeful. This is a team based at one of the nation’s best known universities. There must be an army of young students who would happily provide great camera coverage and commentary. This was amateur hour (and a half.) The cameras cut to the two commentators at half time….Statler and Waldorf.

So forgive a report that says so little about the game. It was almost unwatchable.

14 minutes gone and Athibordee was booked for a trip as Machado went past heading for the penalty area. Kitphom’s free kick from 20 yards was curled well over Korraphat’s goal.

Ryo was almost immediately bundled over by Warawut 22 yards from goal. Tassanapong’s free-kick was hit onto the Kasetsart wall.

Ryo was also in the action minutes later to head Bamba’s corner over the cross bar.

And that was half-time. 0-0. Few chances at either end. Kasetsart seemed happy to simply lump the ball up-field towards Machado; but with little support he was struggling to make any impact on a solid Chiang Mai back three. And with Bamba and Tassanapong disrupting any movement though midfield Kasetsart looked toothless and Korraphat untroubled.

Chiang Mai took a deserved lead 8 minutes into the second half. Sadney unchallenged by the penalty spot rose to meet Apisit’s looping cross. Well-directed downwards and towards the far post it looked like a ball that the keeper should have covered; instead it crept into the far post beyond a late, despairing dive. 1-0 Chiang Mai and time for another splendid Sadney celebration. 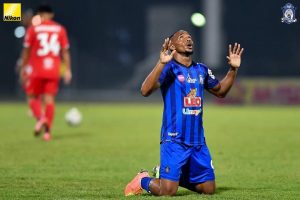 Nattachai replaced Bernardo who appeared to take a knock at the end of the first half.

Narupon Wild made his Chiang Mai debut replacing Eakkaluk. He looked assured throughout his thirty minutes of game time.

On 63 minutes Ryo scored another of his goal of the season contenders with a pacey counter attack and a fine finish. Picking up the ball wide right in his own half Ryo scampered inside beating two tackles, his pass released Nattachai who pulled a low cross back from the right side of the penalty area where Ryo had continued his run and swept the ball home from ten yards. 2-0 Chiang Mai.

The coach was now able to make three more substitutions giving game time to Somyot, Chutipan (both making their CMFC debuts) and to Porncha.

Nattachai might have made it three-nil with a near carbon copy of the earlier Ryo goal but his shot was straight at Chutidetch.

In the last of four minutes of injury time the referee awarded Kasetsart a penalty, presumably for a foul on the far side of the penalty area. Seiya confidently blasted the ball past Korraphat to be greeted by an excited burst of “Go West” over the loud speakers which somehow felt like not the best choice of music.

Chiang Mai kicked off and the referee blew for time.

It was a confident and strong performance from Chiang Mai especially in the second half and after scoring twice they saw the game out with little threat from Kasetsart until the near last kick of the game.

All top six teams in the Championship won over the weekend. Fourth place Chiang Mai FC now head to Khon Kaen United who are five points ahead and in second place after four successive wins. The old cliché of a six-pointer feels appropriate.