Making their full debuts for Chiang Mai FC Narupon Wild and Chutipan Nopnob were at the heart of a battling 0-0 draw at Khon Kaen United on Wednesday night.

Khon Kaen came into the game with four consecutive wins, ten goals scored and just two conceded. At the weekend they had demolished Chainat 3-0.

In Conrado they have the Championship’s leading scorer with a goal a game from eighteen played this season. They are a settled, strong and organized team with Cobo marshalling the defense, David Cuerva and Arthit running midfield and the ex-Ranong winger Badar Ali alongside Conrado. They were unchanged from their win at the weekend.

Chiang Mai made three changes. Eakkaluk and Athibordee were replaced by new arrivals Narupon Wild and Chutipan. Nattachai started upfront in place of Sadney. Chiang Mai were also in their toothpaste kit of mint green and white striped shirts and white shorts.

Pre match viewers on Facebook could enjoy a singing commentator (he really should not) who also appeared to have a bell available to ring in the style of Downton Abbey. Very strange.

Some statistics do give a picture of the game. Khon Kaen had ten corners to Chiang Mai’s four. Khon Kaen had 15 efforts at goal, but just two on target. Chiang Mai had one on target from 5 attempts. The one on target effort being a fierce 25 yard drive from Ryo that Chirawat threw himself to his left to save. It was the only save of note that either goalkeeper had to make.

Khon Kaen dominated possession in the first half without the finishing to take a lead.

Piyawit drove his shot across goal after six minutes. Conrado, dropping off Samroeng, headed Badar Ali’s left foot cross over the bar. Ali was then stopped in the area by a great recovery and challenge from Narupon.

In a rare counter attack Ryo’s ball into the area from the left side was a little overhit for Nattachai and was gathered by the keeper.

Khon Kaen’s ten corners were inswingers targeting Cobo and their big forwards in front of Korraphat. The second after 17 minutes was scrambled uncomfortably clear.

Tassanapong’s foul on David Cuerva gave Conrado a chance at goal from a free kick fully 30 yards out. His strong, dipping strike was narrowly over the bar.

Meedech was beaten by a clever flick from Conrado down the left side but Meedech is nothing if not determined and his strong recovery ensured just a corner was conceded. Minutes later Meedech again stopped Conrado as he ran onto a Cobo through ball.

Into injury time at the end of the first half and another Khon Kaen corner saw Conrado’s header cleared off the goal line.

0-0 at half time. Chiang Mai, after setting out to defend and frustrate the home side, had done exactly that and had survived through a combination of battling defense and good fortune. 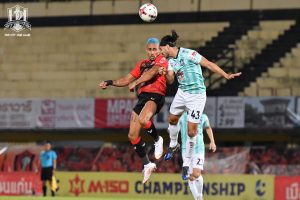 Another chance went begging for the home side as the second half started. Badar Ali’s clever flick gave himself space and time to shoot; his left foot volley going narrowly wide of the far post.

But the rest of the game was a much more even contest. Nattachai beat the offside trap leaving Piyawit stranded but an extra touch gave the defender time to cover and block his shot.

Samroeng was booked for a kick at the show-boating Conrado. Sadney replaced Bernardo. Pinyo made his Chiang Mai debut replacing Samroeng.

The referee gave a generous-looking free kick for a Bamba challenge on Conrado. On the edge of the penalty area. Arthit took the free kick; it deflected of Meedech in the wall and with Korraphat stranded bounced off the top of the cross bar.

Then the moment that could have sealed a Chiang Mai win as Chirawat leaped to his left to save from Ryo.

At the other end Conrado (yes, him again) headed a David Cuervo cross back across goal rather than at the goal. He must be very frustrating for home supporters to watch. He scores plenty of goals but given his talent and the opportunities he is given does he score enough?

Two more Chiang Mai substitutions with ten minutes to go; Atthawit for Ryo and Eakkaluk for Nattachai. In a lively final few minutes a Sadney near post header was deflected wide while at the other end Nattapon shot narrowly wide from 20 yards and Narongrit powered another Khon Kaen corner over the cross bar.

Four minutes of injury time and the referee blew for the end of a really hard-working 90 minutes of football.

Bamba was his normal effective self in a more defensive role in this game. And Tassanapong, captain for the night, had his best game since the restart.

For the strikers it was hard work and half chances. But they did enough to remain a threat throughout.

Chiang Mai remain 5th; five points behind second place Khon Kaen United. A big week of games starts on Sunday with the visit of 7th placed Ayutthaya followed by a Wednesday trip to 8th placed Navy. The travel concerns are lessened by the fact that Chiang Mai will play their home games at BG’s Leo Stadium until at least the end of February.

While I understand the sense in being based in Bangkok as the saying goes there really is no place like home.