Home→Sport→Ryo, king of the Leo 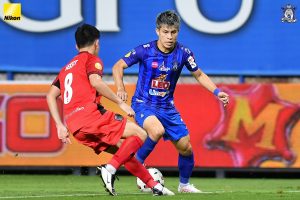 Goal-less. The fourth official has indicated three minutes of injury time. The clock shows 93.04. Tassanapong spreads the ball wide to Porncha by the corner flag. Bubalo misses his attempted clearance. Ryo reacts quickest; wide left and deep inside the Ayutthaya half. He drags the ball infield past Apipoo; moving across the eighteen yard line he evades a lunging tackle from Kan. With his right foot he curls the ball between the two centre halves, past the diving Thatpicha and narrowly inside the far post. 93.20 on the clock.

A goal for any season. The king of the Leo. Breaking Ayutthaya hearts on Valentine’s Day. 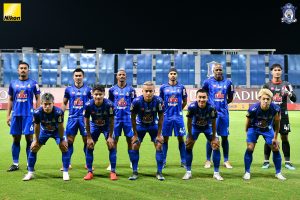 After Khon Kaen United, Nakhon Pathom and Phrae all won on Saturday night this was a massive three points for Chiang Mai which takes them into 5th place, two points behind the other Chiang Mai team.

So back to the beginning. First up – our new home and our fourth home stadium in the last two years. BG Pathum United have a terrific stadium that just needs another stand; a great looking playing service and offered top class broadcasting and commentary. It is a very professional set up.

The only thing missing was any CMFC branding. That would have been nice to see.

Changes from the midweek battle at Khon Kaen United saw Atthawit replace Tassanapong, Pinyo in for Samroeng, and Sadney starting in place of Nattachai. Yuki Bamba was captain for the night. Atthawit’s latest hair style looks like something from the court of Louis XVI.

Ayutthaya also made three changes from their midweek win at home to Kasetsart with Somphop, Seksit and Jakkit all given a start.

The first half did little to get Valentines’ hearts beating. Chiang Mai dominated possession though the better chances fell to Ayutthaya despite their sometimes ponderous counter attacks

On the quarter hour a clever cut-back from Yoo reached Milan Bubalo (once of Lamphun in 2019) by the penalty spot. He needed an extra touch to create space which allowed Narupon to close him down.

Datsakorn’s side-foot shot from 25 yards was straight at Korraphat but was still an unwelcome reminder of his winning 91st minute goal back on 12 September.

Ryo, Sadney and Bernardo were struggling to break down a crowded defense dominated by the big Serbian, Veljko Filipovic. Chances were few. A 30 yard Atthawit shot narrowly cleared the crossbar. Ryo ran onto an Apisit pass into the Ayutthaya penalty area; cutting inside, his off-balance shot was saved by the advancing Thatpicha.

Thatpicha then did well to punch clear Atthawit’s in-swinging corner just before half time.

0-0 at half time. Nattachai replaced Sadney for Chiang Mai. But it was Ayutthaya who started the half stronger.

Chutipan was booked for a foul on Yoo. Datsakorn’s free kick was met by Ekkachai (on as substitute for Jakkit) at the far post; his first time volley clearing the crossbar.

Yoo, Ayutthaya’s leading goalscorer, then had two opportunities, heading the first across, rather than at the goal, and then volleying Bubalo’s deflected cross wide of the far post.

At the other end Nattachai broke down the right; moving inside his powerful left foot shot was straight at Thatpicha who reacted well to save.

An immediate response saw Ekkachai shoot narrowly wide of Korraphat’s left upright from 22 yards. It was the lively Ekkachai again who, in plenty of space, took a long pass from Yoo, dragged the ball onto his right foot, leaving Meedech stranded, but his tame shot was easily saved by Korraphat.

A clever Ryo chip released Pinyo in the Ayutthaya penalty area but he knee-ed his first time effort wide.

There was a scare for Chiang Mai after 74 minutes when Bubalo beat Eakkaluk for pace and put the ball in the net; but only after controlling a forty yard pass with what looked like a shoulder and to the linesman looked like an arm. The referee’s whistle was immediate. Bubalo and the Ayutthaya coaching staff protested loudly.

A Ryo run from the left into the penalty area was stopped by a strong challenge from Veljko, who stuck to his task throughout.

In the final minutes of normal time Somphop, in space from a Bubalo header, volleyed wide of Korraphat’s far post and from almost the same place Apisit Man pulled a shot wide of the near post. Both were good chances.

So to the 93rd minute. The celebrations showed just how much the goal meant to this team.

But the goal was no the end of the drama. 95 minutes gone. Porncha concedes a corner. Bubalo rises at the far post; and almost in slow motion his header falls wide of the far post.

It was not a convincing win. But it was a special win.