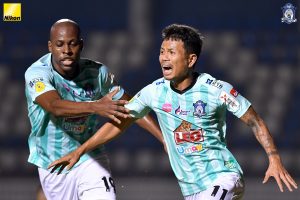 Inspired by the lyrics of the Village People, Chiang Mai FC, on Wednesday evening, gave Navy FC a helping hand with a 45 minute start before a battling, and highly entertaining, second half ensured that the points were shared.

The second half arrivals of Ryo and Sadney both led to almost immediate equalizers.

Chiang Mai made six changes from the weekend win against Ayutthaya. Most telling were that Sadney, Ryo Matsumura and Yuki Bamba were all on the substitutes’ bench. Pinyo, Atthawit and Meedech were also out of the side. In came Eakkaluk, Samroeng, Kongnateechai, Nattachai, Tassanapong and making his first Chiang Mai start, Somyot Pongsuwan, who joined from Rajpracha FC.

Navy replaced Pakkaphon with Panuwat. Their only change from the weekend.

The early pressure, albeit limited, came from Chiang Mai, winning the first corner and with a penalty claim when Kongnateechai fell in the area.

But it was Navy who took the lead after twelve minutes. Instead of clearing the ball forward, Somyot’s short pass in midfield was easily intercepted by Panuwat. He advanced the ball forward past Douglas whose movement left Chutiphan stranded, and onto Wisarut in space at the left corner of the penalty area. He had time to control the pass and then calmly plant the ball past Korraphat. A good finish. 1-0 Navy.

At this stage Navy looked stronger and more urgent. Their high press keeping pressure on Chiang Mai and disrupting the usual Chiang Mai approach of building from the back.

Boonyakait in the Navy goal was booked for handling outside his area. The free kick was wasted.

A Douglas header was straight at Korraphat.

Then came Chiang Mai’s best effort of the first half; Bernardo, who was tireless throughout, won a free kick 25 yards from goal. Apisit was on free kick duty. His well struck free kick was inches wide of the keeper’s left post.

Eakkaluk was booked for taking out Sirichai who then found himself in space on the right edge of the penalty area; his low shot caught the heel of the covering Narupon and with Korraphat stranded it deflected off the bottom of the near upright for a corner.

Two minutes into injury time and Chiang Mai’s first half was summed up when Tassanapong failed to control a simple pass in midfield, and then gave away a free kick with a lunging challenge.

It was a mess. Chiang Mai had looked adrift and rudderless. Without Bamba there was no one sitting in front of the back line who could either help protect them or clean up any loose ball.

Resting players makes sense in this two games a week schedule. But Navy have had a string of good results and are resilient, especially at home. It was not the game to rest three of the side’s most influential players.

The half time changes saw Atthawit replace Somyot, who had been disappointing, and Ryo replace Nattachai.

The first chance of the half fell to Wisarut as he bent his right foot shot high and wide.

A quickly taken Chiang Mai free kick released Ryo, who with no way through, found Apisit Sorada with a clever back heel. The winger scooped his shot over the crossbar. He had a good game but for his own confidence he needs to get his name on the scoresheet.

Ryo’s arrival had given Chiang Mai much needed urgency and forward movement. Five minutes into the second half his short cross from just outside the right side of the penalty area was well met by Bernardo. Bonnyakait’s reflex save got a hand to the ball but only enough to push it into the path of Kongnateechai for a simple finish. 1-1.

Navy should then have taken the lead. Chusana, beating Narupon as the defender tried to clear. With time to pick his spot from twelve yards he shot straight at Korraphat and the ball was scrambled for a corner, which the keeper claimed well.

Navy took the lead again with a massive assist from Chiang Mai.

Despite Navy forwards on the edge of the penalty area Korraphat knocked the ball across his area as Chiang Mai aimed to keep possession. Under pressure Chiang Mai failed to clear; Atthawit eventually giving away a free kick as he tried to reach Samroeng’s aimless backheel.

Wisarut lobbed the free kick forward from forty yards. Douglas, fighting off the apparent cold in fetching tights, climbed above Eakkaluk and Narupon and from 12 yards headed the ball down on goal. Korraphat having decided not to come for the cross, started back peddling, appeared to slip and his dive was too late.  Awful defending. 2-1 to Navy.

Douglas is 38; he retired four years ago after playing for a number of League 1 teams, and has been coaching in Thailand. He joined Navy in the recent transfer window. His goal came because he attacked the ball and the defenders did not. He went off shortly afterwards presumably for Horlicks and an early night.

Kongnateechai was upended by Panuwat twenty yards from goal. Atthawit’s free kick deflecting off the wall for a corner.

Ryo was then flattened in the penalty area taking a return pass from Atthawit. The referee was not interested. Nor was he interested at the other end when Chutiphan clashed with Nitikorn. Consistent refereeing is always welcome.

Sadney and Pinyo came on for the last 22 minutes. It was an inspired substitution when three minutes later Sadney tapped in the equalizer.

A goal that started with Korraphat throwing out to Meedech whose long ball forward was misheaded by a defender into the run of Sadney. Sadney held off Frauches with support from Bernardo. Bernardo passed infield to Ryo, but he had his back to goal. Ryo found Sadney on the right corner of the penalty area; his one touch ball sent Bernardo to the goal line; his low, hard cross beat the goalkeeper and rebounded of the foot of the Navy centre half, Tatsuya, straight to Sadney for the easiest of tap-in finishes.

A second assist for Bernardo who led the line by example throughout.

Direct, fluid, aware and with a little good fortune. It was such a difference from the labouring first half performance.

Uncertain defending from Chiang Mai and almost immediately Korraphat had to make a fabulous diving save away to his right to keep out Chusana’s drive which was headed for the top corner.

Navy still pressed and with weak challenges from Narupon and Meedech the ball broke to Sirichai who sliced his shot wide.

With full time approaching both teams appeared to settle for a point each. Summed up by the whistle blowing while the ball was still in Pinyo’s hands as he spend the final seconds searching for someone to throw the ball in to.

An entertaining second half. Navy were exactly as expected. But a Chiang Mai without Bamba meant that every Navy attack was a threat.

Navy will trouble any team that they play against. Chiang Mai remain 5th but are seven points behind Khon Kaen United in second place. There are still 12 games to play. 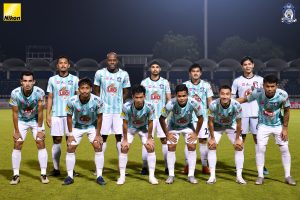