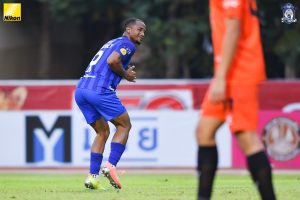 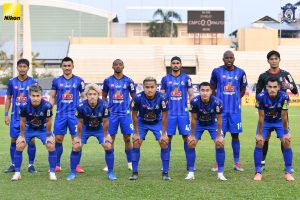 Ranong came to Chiang Mai on Sunday night and left having put a very large dent in Chiang Mai FC’s hopes of an automatic promotion spot.

In a five minute car crash at the start of the second half Chiang Mai conceded twice, turning what looked like a comfortable lead into salvaging a point.

After the midweek misadventure at Navy, Chiang Mai returned to a full strength side with five changes.

Ranong meanwhile are a very different team from that which played in the near farcical conditions on 19 September when they hosted Chiang Mai. There were only five survivors from their starting line up that night. This was also a reunion for Bernardo who joined Chiang Mai from Ranong in the transfer window.

Ranong’s transfer window recruits included the aggressive Cameroonian Frank who joined from Nonthaburi, the Iraqi/Swedish forward Al Jaberi who arrived from Kelantan in the Malaysian League and the Brazilian Rafael from Ayutthaya.

The visitors made just two changes from their midweek team that had won away at Khon Kaen. Oddly since the restart Ranong had won both of their away games and lost both of their home games.

This was also the first game at Chiang Mai’s Municipal Stadium in 2021. It looked very green. And empty.

Chiang Mai would dominate the first half but with just a single goal to show for their efforts, through a combination of missed opportunities and some generous refereeing.

Chiang Mai’s first corner after 11 minutes was taken short allowing Bamba’s angled cross which was met by Bernardo but without any power to his header.

Sadney’s swift break down the left side saw his cross driven just behind Bernardo; Frank cleared for another Chiang Mai corner and then conceded a free kick as he jumped into Atthawit twenty-two yards from goal. Atthawit’s free kick was high and wide.

At the other Nattawut’s curled 30 yard free kick comfortably cleared the crossbar.

Twenty minutes gone and Chiang Mai took the lead. A terrific measured pass from Atthawit released Samroeng on the right side of the penalty area; his first time low cross was behind Bernardo but arrived invitingly into the path of Sadney who stroked it home with his right foot. A really well worked goal. 1-0 Chiang Mai.

A dismal challenge by Rafael as he raked his studs down Bamba’s shin after a throw in was simply a free kick according to the referee. It appeared that there was some intent after Bamba had accidently stood on the hand of Noppadon some minutes earlier.

A right footed twenty yard Ryo drive was hit with power but inches wide of the left upright.

Sadney, wide left, then chipped a ball forward for Samroeng who reached the ball on the left corner of the penalty area before the onrushing Ranong goalkeeper. His first time volley was over-hit and cleared the crossbar.

42 minutes gone and Ryo ran onto an Apisit pass and cut into the penalty area.
Nattawut stuck out his left leg and Ryo tumbled over. The referee was perhaps the only person at the stadium and watching on television who did not think it was a penalty.

Into injury time at the end of the first half and Ryo ran at and past Mardochee with some ease leaving a clear run on goal. Mardochee cynically hauled him down outside the penalty area and was fortunate to only receive a yellow card.

Chiang Mai FC led 1-0 at half time – it could, and probably should, have been more.

Ranong emerged for the second half like a team possessed. Withing a minute of the restart Chamsuddeen, on as a second half substitute, had beaten Bamba and passed the ball infield to Al Jaberi who, given too much room by Narupon, had the space to spin and, with his right foot, to rifle home a terrific 20 yard shot. 1-1.

Two minutes later Ranong took the lead. Nattawut nonchalantly chipped the ball into the penalty area where the substitute Jakkit ran into space and crossed low from the goal line. The ball bounced in front of, and eluded, the diving Korraphat and at the back post Meedech, under pressure from Frank, could only slice the ball into his own goal. 1-2.

Chiang Mai had not gotten out of first gear and were now chasing the game.

Set up by Rafael, Frank, with some power, shot from 22 yards but straight at Korraphat.

At the other end Ryo then beat Frank in midfield but his 25yard shot curled too close to Wichaya for an easy catch.

However, within two minutes Chiang Mai had equalized. Bamba’s right side corner was met by Sadney with a powerful and well-timed header which rebounded from the crossbar. Bernardo reacted quickest to half-volley home the rebound from six yards. 2-2.

Frank at long last was booked for another foul on Ryo.

Nattachai replaced Sadney. Fresh legs but Sadney had been causing problems for Ranong all evening.

There was an alarming lack of urgency about the last fifteen minutes. Creativity and pace had been replaced by a fear of making a mistake. What should have been an exciting finish turned out to be almost as miserable as the Ranong weather five months ago.

Amornthep replaced Apisit with three minutes to go for his Chiang Mai debut.

One half chance came as his cross along the penalty area reached Ryo who was able to turn and hit a 20 yard volley wide of the far upright.

The referee blew after the regulation four minutes of injury time. 2-2.

There are no easy games in this league. But Chiang Mai’s third draw in the last four games leaves the team in fifth place nine points from second place and six points behind Chiang Mai United who are third.

This form is still good enough for a play-off spot but not for a challenge for either of the two automatic promotion places.

A difficult visit to a resurgent Chainat is next up on Wednesday.