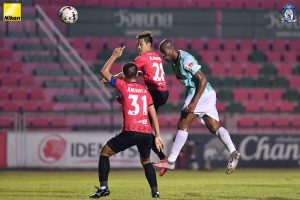 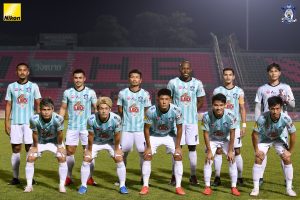 There are times when writing a match report is really hard.  This was one such game.

Other than a fabulous Bernardo header this was a bad night out for Chiang Mai FC. It is also a result that brings Chainat into the scrap for play-off places.

Chiang Mai made five changes to the team that drew with Ranong on Sunday. In came Chutipan, Tassanapong, Amornthep, for his full debut, Pinyo and Kongnateechai.

Since the restart Chainat have been playing with almost two separate teams; at home and away. So this team saw nine changes from the side that won 2-0 at Udon Thani at the weekend.

It was Chiang Mai’s new back three that gifted Chainat the first goal after six minutes. Tassanapong lost possession and then in confusion collided with Eakkaluk on the left side; the ball breaking to Kandanai; a couple of paces took him to the goal-line and his low cross bounced from the foot of Chutipan in front of goal into the path of Pongpat who lashed the ball home. 1-0 Chainat.

Chiang Mai tried to press forward but with little to show for their effort.

A Pinyo cross was cut-out for a corner; a break from Tassanapong and Ryo set up Pinyo again; this time his cross was overhit. On the left side Amornthep looked tidy, without being threatening.

A long ball forward from the Chainat half reached Pongpat on the edge of the Chiang Mai area. A good first touch allowed him to turn inside Amornthep with ease before holding off Eakkaluk’s challenge and leaving the ball for the onrushing Anuwat, whose run was not covered by Tassanapong, to thump the ball inside Korraphat’s right hand post from eighteen yards. 2-0.

Chiang Mai pushed forward and Ryo’s pass infield to Bamba drew a foul from Krailas just outside the penalty area.

With half time minutes away Kongnateechai’s persistence won a ball on the right side and he drove forward into space; his cross was excellent. Twelve yards from goal Bernardo surrounded by three defenders jumped to send a powerful header into the far corner of Kittipun’s goal. 2-1.

There was still time for Poomipat to blast over the Chiang Mai crossbar from inside the penalty area.

Changes were needed by the away side and at half time Atthawit and Apisit Sorada replaces Eakkaluk and Amornthep. Tassanapong moved to the middle of the back tree with Chutipan moving to the right side

At this stage the game opened up in part because Chiang Mai, mainly through Atthawit, started to hit longer passes forward for Bernardo and Ryo. But the Chainat defence, led by Wellington, stood firm.

Korraphat made a safe stop from Kandanai’s curled shot from the left side of the penalty area.

But with thirty minutes to go the game was effectively over. Erivelto, once of Navy FC, had replaced Tanaset. With possibly his first touch he met Poomipat’s cross from the left, beating the covering Apisit to the ball, and sliding it past Korraphat’s left hand from ten yards.

Nattapoom replaced Ryo; who looked weary and had run into the Wellington brick wall for most of the evening.

Fifteen minutes left and Bernardo, who again battled throughout, was flattened in the penalty area by Anuwat as he jumped for a Samroeng cross. It was a clumsy challenge but the referee decided it was not a penalty.

As Chainat sat back on their lead Chiang Mai pressed forward, Warayut, Apichaok and Suksan were booked for poor challenges. Apisit and Atthawit’s free kicks were both poor; neither troubling the goalkeeper.

Chutipan on the edge of the Chainat penalty area laid the ball back for Atthawit; his curling right foot shot was narrowly wide.

Suchanon, on as substitute and making his Chiang Mai debut, hit a first time left-foot shot over the bar, from a low Apisit cross. Yet, these were half chances with the game already gone.

Other than Bernardo’s header Chiang Mai did not have another effort on goal.

Into injury time and Erivelto quickly blamed his boots for his stumble in space in front of goal when set up by substitute Nakin. A little comedy was welcome.

One thing it is all too easy to forget watching these matches on television is just how hot the weather is and how physically draining these games are. This schedule is punishing.

So Chiang Mai slip to sixth in the Championship after their first defeat since the February restart; three points ahead of both Ayutthaya and Chainat.

The pace is relentless. Next up on Saturday is a home game against struggling MOF Customs and then next Wednesday our first visit to the new Nongbua stadium and to the league leaders.