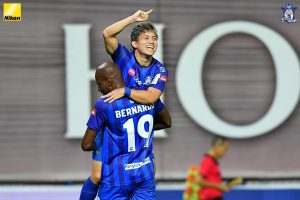 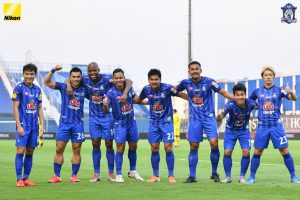 93 minutes into the game, and with his team leading 4-1, Bernardo was still sprinting after the ball down the left touchline. He leads the line by example, but tonight everyone shared that energy.

Customs made six changes from their midweek home defeat to Khon Kaen United and only two players remained from the side that played at home to Chiang Mai on 4th October.

A first minute goal settled any Chiang Mai nerves. It was direct, clinical and beautifully executed. It was also a massive surprise. Chiang Mai’s first half approach is usually cautious and patient. With his first touch Bamba launched a 50 yard pass to Pinyo on the right side of the Customs penalty area. Pinyo did not think about controlling the ball and looking for support; instead his first time volley was an inch perfect cross onto the head of Nattachai who had run in between Chanintorn and Henri to head home from six yards. 1-0 Chiang Mai.

Somyot won Chiang Mai’s first corner after six minutes. Verzura then fouled Apisit twenty yards from goal on the left side of the penalty area. Free kicks have not been even close in the last few games. This time Yuki Bamba stepped up and curled a powerful right foot shot over the wall and into the keeper’s top right corner. Bamba’s first goal for Chiang Mai. 2-0.

Chiang Mai were playing with pace and control. First to every ball and allowing Customs no time to settle.

Bernardo released Somyot on the right; his cross was just close enough for Phiyawat in goal to make an interception.

It was 21 minutes before Customs first shot – Chanintorn hitting a high and very wide slice. When Customs did try to break forward there was no pace; Danilo leading the line mostly from some distance behind it.

Meedech’s long ball forward was just headed clear by the alert Phiyawat rushing from his goal.

Saranyu was booked for a hack at Pinyo. Apisit took the free kick which just eluded Nattachai at the far post.

Chutipan then left the field with an injury to be replaced by Eakkaluk.

A rare attack from Customs as Slanyu ran past Somyot into the penalty area before his shot was blocked by Meedech for a corner.

An attempted clearance from Apisit was miscued and caught by Korraphat. As Customs protested that this was a backpass Chiang Mai counter-attacked and Somyot’s low drive was uncomfortably shoveled wide by Phiyawat for a corner.

The corner was taken short allowing Bamba to send in a low cross that was smartly headed home by Meedech. The linesman flagged for offside. Replays suggested that it was Nattachai who was in an offside position but he was neither interfering nor active. No goal and Chiang Mai led 2-0 at half time.

Ryo emerged for the second half in place of Nattachai and his impact was almost immediate.

After a competitive first five minutes of the half Somyot broke up a Customs attack by the Chiang Mai penalty area; his pass to Suchanon was quickly forwarded to Bernardo on the left side but still in his own half. Bernardo is deceptively quick – perhaps because he needs just one stride to the two taken by most other mortals. He ran fully forty yards; drifted infield and with three defenders converging on him. Inside the Customs penalty area he slid his pass to Ryo unmarked on the far side of the area. Right foot one touch to control and left foot one touch to slide the ball past Phiyawat. 3-0 Chiang Mai.

Sitting on a 3-0 lead it is easy to get a little complacent. A rare loose pass from Bamba was picked up by Verzura. A return pass from Adisak allowed Verzura to cross from the right. Partially cleared, the ball came back to Adisak. His cross was inch perfect for Suradet to run past a tame challenge from Pinyo and head past Korraphat. 3-1.

But that was the end of Customs as an attacking force.

Another flowing Chiang Mai move from Tassanapong to Ryo to Pinyo. Pinyo crossed from the right side. Atthawit cleverly let the ball run past him. Sumeth let fly left-footed from 20 yards and Phiyawat did very well to claw the ball out of his top right corner.

Bernardo trying to reach a Bamba cross got goalside of Sirom who looked to be pulling the big forward to the ground in front of goal and Bernardo was unable to get a clean strike on goal.

Sumeth wide on the left either dragged his shot wide or his cross was too far in front of the onrushing Bernardo.

Another big save from Phiyawat as he slid across goal to save with his legs as Ryo, under pressure from Sirom, tried to turn in a Pinyo cross.

Into injury time and Porncha, on as substitute for Suchanon, broke forward from his own half aided by the rebound from a poor challenge by Henri. Porncha’s final touch in front of goal was heavy but Phiyawat’s challenge was both upright and half-hearted. The referee giving a freekick against Porncha as he stretched for the ball.

Into the last minute for the icing on the Chiang Mai cake. Porncha, this time in space down the right, had time to measure his pass into the penalty area where Ryo, now with his left foot and then his right scored from ten yards. 4-1 Chiang Mai.

Customs were poor. But Chiang Mai looked a different class tonight. Eager, competitive, creative; playing with pace and purpose. More of that please.

Imagine if we could play every home game on a surface as good as the Leo Stadium. It is a Premiership quality pitch suited to a team playing quality football.

Just nine games to go – and up next a real test at the Championship leaders.