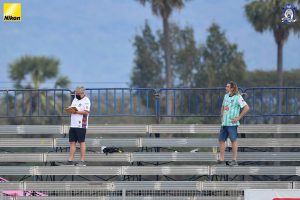 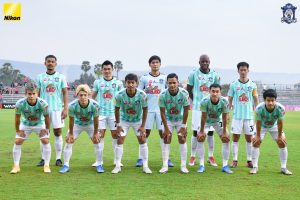 Crowds are back in Thai football stadiums for the last nine matches of this very, very long Championship season.

There are restrictions on the crowd size and the mask police seemed especially eager to ensure that the two (yes you read that right) Chiang Mai followers were both covered up!

Nongbua are unbeaten this season and despite a stumble or two since the season restart, they look again to be the best team in this league. The gap between Nongbua and Chiang Mai is 17 points.

The new Pitchaya Stadium opened with some fanfare in October 2020. It was disappointing. The one main stand is an impressive size. It is also substantially unfinished and looks dated already. The pitch was poor. Uneven, heavily grassed in places and heavily watered.

Since 2014 the club has been owned by Suthep Poomongkolsuriya, the owner of the adjacent Pitchayabundit College. The stadium is surrounded by training pitches and related facilities. There are club academies for age group teams. It has the makings of an impressive set up.

Chiang Mai made two changes from the weekend romp at the Leo against Customs. Samroeng and Ryo returning for Pinyo and Nattachai.

Nongbua meanwhile made six changes to the team that drew disappointingly 0-0 at Uthai Thani at the weekend. In particular Greg Houla, who joined in the transfer window from Police Tero, returned to the side – he is seriously quick.

Nongbua dominated the first 45 minutes with the game being played in the Chiang Mai half furthest from the away supporters. Korraphat making a good early interception to cut out a Valdo cross.

It was just six minutes before the mask police arrived. The two away supporters were in a stand 11 yards wide with nine rows of metal seats. We were very socially distanced. Not surprisingly the local mask regulators made less (actually, no) effort to ensure mask compliance by the home fans in the stand to our right.

The first half hour saw a series of Nongbua free kicks from the left and right sides that became catching practice for Korraphat. The Chiang Mai keeper was also alert to flick a Valdo header, from Houla’s right side cross, over the cross bar.

In a rare away attack Nongbua failed to clear a Yuki Bamba free kick allowing Bernardo to head the ball on for Suchanon whose header drew a comfortable save from Jamsuwan in goal.

Consistent pressure led to Nongbua’s opening goal after 29 minutes. A Nongbua corner was hit to the near post; flicked on by Porntep, Korraphat tired to punch clear but only as far as Porntep who released Lursan on the left of the penalty area; he eased past Bamba to the goal line and his low cross found Valdo stooping in front of goal to stoop to head past Korraphat.

Five minutes later Chiang Mai lost possession trying to play out of defense. Apisit passed the ball back into the area for Chutipan whose attempted clearance simply cleared out Houla arriving at speed in the area. A penalty and a yellow card were inevitable.

Penalties should be simple. Valdo went for theatrical. A ten yard stuttering run-up. When he eventually got to the ball his weak effort was far too close to Korraphat who had remarkably stayed awake while this whole mess unfolded. Korraphat made the save diving to his right; and then blocked Valdo’s rebound effort. Great work from the goalkeeper.

Korraphat’s reward was to be flattened as he dived to punch clear a cross in the next attack.

So at half time Chiang Mai were still in the game; albeit hanging on. Atthawit and Pinyo came on for the second half replacing Somyot and Samroeng.

As Chiang Mai settled into a more competitive half they conceded again with a bizarre goal.

Tassanapong blocked a run and shot from Yod who had replaced Valdo. The left side corner bounced around the six yard line before Apisit at the near post tried to boot the ball clear. Instead he contrived to hit it into the back of Yod. The ball rebounding into the net.

Could Chiang Mai snatch a second? It seemed they had three minutes later with substitute Nattaphoom’s spectacular bicycle kick from Apisit’s pass.

Two problems: Nattaphoom’s fine effort actually passed inches wide as the goalkeeper crashed into his right hand upright and Apisit had been flagged offside when he received the ball from Ryo on the left side. A tight call as there were two Nongbua defenders on the six yard line. From a distance it looked like Chiang Mai had equalised.

Nongbua’s second penalty came from a foul by Bamba who was the wrong side of Kitsana as he ran at pace into the penalty area.

Again this resulted from a giveaway by Chiang Mai trying once again to play possession football from a short goal kick. Kitsana looked to go down very easily. A penalty and Bamba’s second yellow card so he was dismissed leaving Chiang Mai to play the last 20 minutes with ten men.

Greg Houla stepped up to take the penalty. Well struck to the keeper’s left. Korraphat threw himself across the goal to make a fine one -handed stop.

Against ten men Nongbua scored twice. Kitsana, with Apisit ball watching, headed home at the far post from a cross by Lursan.

Into injury time and Nongbua’s fourth was a speedy counter attack.

Nongbua cleared a long throw in from Meedech and Kitsana released Yod. Korraphat rushed from his goal but was never going to be first to the ball and Yod passed inside to Houla, who had left scorched grass in his 60 yard run and had the simplest of tap ins. Substitutes Eakkaluk and Sumeth were non-starters in that race.

Nongbua were simply bigger, fitter and stronger. They will win this league. Chiang Mai remain sixth in the last of the play-off places, but looking over their shoulders at much-improved Chainat.

Next: A real home game at last, against fourth placed Phrae, on Sunday7th March.