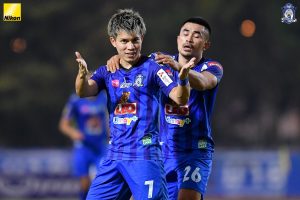 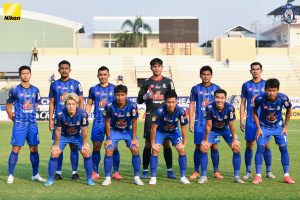 It took an eightieth minute goal from second half substitute Ryo Matsumura to snatch a win against a determined Phrae side in an absorbing contest on Sunday night in front of a crowd of 692.

It was 35C at kick off with an AQI of close to 200. A difficult evening for football.

With injuries sidelining Bernardo and Sadney, and with Ryo rested, Chiang Mai looked lightweight and light on goals up front where Kongnateechai led the line supported by Nattapoom and Nattachai.

Eakkaluk returned to the centre of a back three allowing Tassanapong to move to his more comfortable midfield role.
Captaining Phrae was the old Chiang Mai, and Thailand, warrior Phichitphong with the less popular Wanmai also returning to Chiang Mai; he was at Customs in the first half of the season.

Taku Ito once of JL Chiang Mai and at Phitsanulok for the first half of this season had an eye-catching game from Phrae, as he did at the weekend against Chiang Mai United.

Up front, the El Salvadorian, Mark Lester Blanco, led the line for Phrae.

Phrae allowed the home team plenty of space and possession and for the first 75 yards of the pitch Chiang Mai played some flowing, passing football. It was in the last quarter that their game broke down into uncertainty, reflecting a lack of confidence in front of goal.
Nattapoom shot wide from an angle; Nattachai latched onto a quickly taken throw-in from Apisit but shot over. Kongnateechai’s shot was blocked by a defender.

Apisit, at long last, took on a defender and went past him on the outside; his cross then evading everyone in the penalty area.

But the two best chances in these opening minutes fell to Phrae; Kittisak’s run in front of Apisit saw him head a left wing cross narrowly over the bar; and Adison Noonart’s cross from the right side was met by the unmarked Blanco, twelve yards from goal but his header also cleared the crossbar.

Apisit’s wall pass with Nattapoom on the left side left the winger in space; his cross found Nattachai in the area; he laid the ball off for Samroeng whose shot was blocked, the rebound falling to Nattachai whose shot was also cleared with some ease.

Blanco’s header released Taku down the left side; shepherded by Eakkaluk, Taku’s shot from the narrowest of angles was into the side netting.

Eakkaluk’s missed header twenty yards from his own goal set up Taku whose controlled volley was narrowly wide of Korraphat’s right hand post.

Into injury time at the end of the first half and as a Chiang Mai free kick is sent into the area Nattapoom was floored on the far side of the penalty area. The referee saw nothing.

Chutipan’s lobbed header back into the Phrae penalty saw Nattapoom jumping with force into Wanmai. The referee did not see an offense but Nattapoom looked to be leading with his arm. Wanmai (and perhaps wisely, Nattapoom) both needed treatment. The referee blowing for half time with Wanmai still lying prone and the Phrae players demanding justice.

This did feel rather like retribution for the Wanmai assault on Ryo in the Customs v Chiang Mai match last October.

Wanmai did not emerge for the second half.

But, importantly, Ryo did. For the ineffective Kongnateechai.

The goal threats of the first half largely dried up at both ends. An Apisit free kick was punched clear by Pathomtat.

Blanco stooped to head a right wing cross over the bar.

Ryo’s run into the Phrae penalty area saw him stretch to volley a long ball from his own half by Eakkaluk.

Eakkaluk was then booked for a foul on Noppawit as Phrae broke forward with Meedech out of position after one of his rampaging sorties into opposition territory.

Adisorn Sappaso took the free kick with his left foot from 25 yards. His effort pierced the gap left in the wall between Meedech and Chutipan and bounced high just in front of the diving Korraphat. Hitting the base of the right hand upright the ball bounced out harmlessly in front of goal.

More Chiang Mai substitutions with eleven minutes to go and a welcome return for Narupon to the heart of the defense.

And then; after 80 minutes. Ryo’s moment. Apisit gets to the goal-line on the left side and pulls the ball back into the area where Ryo was able to adjust his run and hit a half-volley with his left foot into the bottom left corner of the goal. A quality goal from a quality player (I have always wanted to type that!)

Some determined defending; Korraphat catches; and a remarkable 91st minute block by Bamba from Noppawit’s shot, kept Phrae at bay.

Chiang Mai FC completed the home and away double against Phrae but remain a point behind them in the Championship in 4th and 5th places with seven games to go.