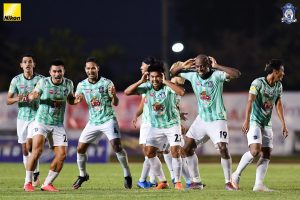 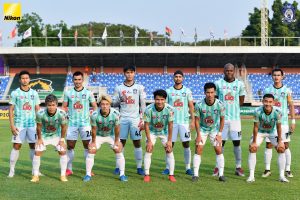 The heat had been turned up to full blast on Sunday night in Uthai Thani; 38C at the 5pm kick off with the sun still high above the hills that frame this attractive provincial stadium.

The heat is also on for the Championship play-off places. On which more later.

Ryo and Bernardo were returned to the starting like up. Narupon Wild starting in place of Chutipan and Pinyo preferred to Somroeng.

Uthai Thani lie in 17th place, above hapless Samut Sakhon. But their recent form has been reasonable including a home draw with Nongbua and an away win in midweek at Ayutthaya.

A crowd of 708 saw a subdued start to the game as both teams adjusted to conditions that were better suited to a beach party than a football match.

The early threat came from Chiang Mai. Pisan flailed unconvincingly at a Bamba corner; Tassanapong then released Bernardo down the right wing before his cross was blocked for another corner. Bamba’s corner reached Bernardo at the back post who headed the ball down into the six yard area where Eakkaluk instinctively stuck out a right foot deflecting the ball narrowly over the bar.

It was Ryo’s turn to then release Pinyo down the right side; his cross was palmed away by the diving goalkeeper; eventually reaching Bernardo who drilled the ball across goal inches too far in front of Ryo at the far post.

Uthai Thani were not dormant but had little possession in the first half; the Brazilian Wallace looked lively but not always on the same wavelength as his colleagues. Phattharaphon was a regular threat down the right side and forced Narupon into stretching to clear a low cross.

Breaking forward at speed Meedech’s cross just eluded Bernardo who had launched himself at the far post like a leaping salmon.

Uthai Thani enjoyed two good chances on the half hour; Apisit conceded a free kick 22 yards in front of goal. Phattharaphon’s curling free kick was pushed away by Korraphat diving low to his right.

Wallace’s chip into the area from the left side just eluded Daiki’s outstretched foot and almost eluded Korraphat’s left hand.

A long ball forward from Meedech saw Pisan sprawl first to the ball in front of Bernardo; the goalkeeper injuring a hand in the process.

A Phattharaphon run down the right ended with a low square pass to the edge of the area where Wallace’s first time shot was mishit and mis-directed.

On 41 minutes Chiang Mai opened the scoring. Bernardo held the ball up on the left edge of the area; it broke to Nattapoom who chipped a pass towards the penalty spot where Apisit found enough space between Wanchat and Kritsana to take a touch with his right foot and then poke the ball past Pisan from 12 yards into the top left corner. It was a smart finish and Apisit’s first league goal of the season. Long overdue.

On the stroke of half time Wanchat’s 35 yard free lick for Uthai Thani was struck with power and bend and was very smartly turned over by Korraphat at full stretch.

The big surprise at the stat of the second half was to see Korraphat replaced by Jaturong; presumably due to an injury to the Chiang Mai first choice ‘keeper. Jaturong was to have a busy half. Though his first contribution was to be booked for time-wasting – a little unnecessary with 35 minutes still to play.

How much the game changed in the second half. In the opening period Chiang Mai had six of the seven corners awarded. In the second half Uthai Thani had seven of the eight corners.

From one of those corners the ball was played short for Phattharaphon to whip in a low cross that Jaturong did well to gather.

A minute later a Chiang Mai attack broke down on the edge of the Uthai Thani area; the home team breaking forward and releasing Daiki wide right – he cut inside and Jaturong could not hold his twenty yard left foot shot; Meedech bravely bailing out his goalkeeper.

Watcharakorn then played a neat pass into the penalty area from the left side for Phattharaphon to run onto; the Uthai Thani forward’s neat footwork beat Narupon, Bamba and Eakkaluk; Jaturong was bravely off his line and was caught in the face by Phattharaphon’s trailing leg earning a booking for the forward.

A trip on Ryo saw Aifan booked in the middle of the Uthai Thani half. Ryo beat the back line to run onto Bamba’s free kick hit deep into the area. Pisan’s reaction save turning the ball over the crossbar with his left hand was top class.

A fluid move down the left between Bamba and Ryo released Apisit whose cross volleyed over the bar by Somyot, on as a replacement for Nattapoom.

Watacharakorn then intercepted a pass intended for Bernardo and his left foot shot was scrambled past the post by Jaturong.

Jaturong was again in action to punch Soukaphone’s free kick out for a corner. The Laos forward had replaced Farid. The two clashed again when Jaturong pounced after a cross that he had dropped and received a boot from the Laos forward.

Uthai Thani had worked hard for an equalizer but entering six minutes of injury time it was Chiang Mai who scored to seal the win. Bernardo’s strength held off Wanchat and Airfan on the right side; allowing him to turn and run across the area before a nicely weighted pass to Nattachai who had time to set himself and then curl a terrific 22 yard shot into Pisan’s top left corner.

Game over. Not a convincing win but a very valuable three points.

Uthai Thani had been valiant but it is clear where their problem lies. They have scored just once in their last six games. They applied plenty of pressure; enjoyed a succession of corners but are simply not good enough in front of goal. Sadly they look likely to be playing in T3 next season.

Chiang Mai meanwhile are in the middle of the play off pack. Khon Kaen United and Phrae are both in poor runs of form without a win in their last five games. Nakhon Pathom and Chainat are the form sides. The play off spots could well only be decided on 31 March. It has been a good innovation and keeps clubs and fans involved until the final stages of the season.

Next up Lampang, always a lively affair, on Wednesday and then the last long haul trip of the season with an away game at Sisaket on Sunday 21st March. 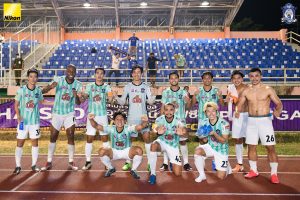